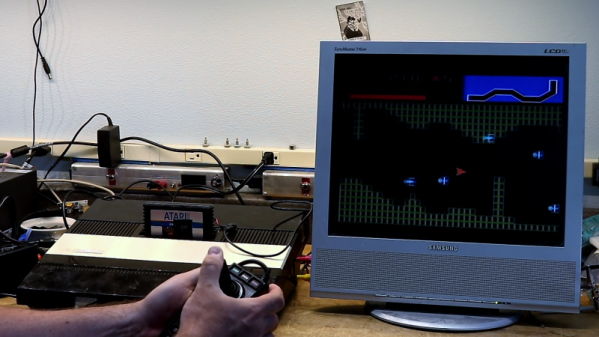 There’s something powerful about reliving the experience of using a game console from our personal good old days, especially the tactile memories stored up from hundreds of hours handling a chintzy joystick or the sound and feel of inserting a game cartridge. Emulators have their place, but they fall far short of period-correct hardware in the nostalgia department.

That’s not to say that the retro gear can’t use a little help in terms of usability, which is why [Scott M. Baker] built this Raspberry Pi multi-cartridge for his Atari 5200. The idea is to maintain the experience of the cartridge interface without having to keep stacks of cartridges around for all the games he wants to play. [Scott] leveraged the approach he used when he built a virtual floppy drive for a homebrew PC/XT: dual-port memory. The IDT7007 is a 32k chip that lives between the Atari 5200 and a Raspberry Pi Zero and can be addressed by both systems; the Pi to write ROM images to the memory, and the console to read them. He had to deal with some fussy details like chip select logic and dealing with the cartridge interlock signals, not to mention the difference in voltage between the memory chip’s logic levels and that of the Pi. Retro game-play occupies the first part of the video below; skip to 6:45 for build details.

The one quibble we have is trying to jam everything into an old cartridge. It’s critical to replicating the tactile experience, and while we don’t think we’d have gone so far as to injection mold a custom cartridge to house everything without any protrusions, we might have 3D-printed a custom cartridge instead. In the end it doesn’t detract much from the finished project, though, and we appreciate the mix of old and new tech.

END_OF_DOCUMENT_TOKEN_TO_BE_REPLACED 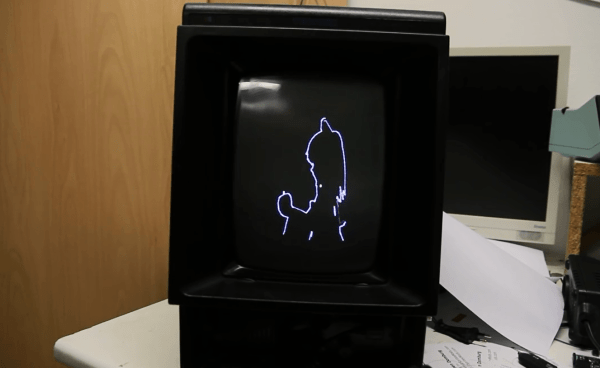 [Sprite_TM] had a Vectrex console that he wanted to play with. Alas, his makeshift multicart had fallen into disrepair. Rolling up his hacking sleeves, he set about making a new one, a better one. His PCB design included his microcontroller of choice: the ST STM32F411, a 32-bit 100Mhz ARM Cortex M4, along with a 16MB SPI flash chip. [Sprite_TM] wanted to make programming games onto the multicart simple. Using the libopencm3 firmware library for the STM in conjunction with Elm-Chans FatFS, the multicart could be plugged into a computer’s USB port and have any game data dragged and dropped onto it like a USB stick. The PCB then connects directly into the Vectrex’s cartridge port. The first cartridge file is a basic menu that lists all of the game ROMs stored in the flash memory. When the user selects the game the STM loads that ROM file which the menu software then boots.

After loading his entire Vectrex ROM library onto the multicart, [Sprite_TM] realized he had far too much space left over – so he decided to add some extras. His first choice was Bad Apple (YouTube link), a music video made by fans of the Touhou Project game series. The video features black and white silhouettes of the many game characters in a shadow art style. Since its debut, Bad Apple has been ported from everything from the Sega Genesis (YouTube link) to laser scanners (YouTube link). It was time for the Vectrex to join the list.

After ripping the video from YouTube, [Sprite_TM] used MPlayer to save each frame as a PNG along with a wave file of the music. Next, he ran Potrace on the PNG files to get vector versions. Using a custom PHP script, the resulting JSON file was post-processed into relative vectors the Vectrex uses. Digital audio was possible by having the Vectrex’s 8-bit DA-converter perform double duty both for the video circuit and the audio. However, the volume must be turned to the max in order to hear the music. Incidentally, the DAC can only output audio in this scenario when vectors are not being drawn, so the event timing needed to be adjusted. The video and audio data was re-parsed after a modified version of VecX was used to get the timing events synchronized before transferring Bad Apple onto the multicart.

You can see the Vectrex version of Bad Apple after the break, along with a 3D-engine based on Doom levels. The engine is written in C and makes use of the Z-buffer, creating the effect of solid 3D-objects in front of each other.  There are no weapons or enemies to dispatch here, but the effect is impressive nonetheless.

END_OF_DOCUMENT_TOKEN_TO_BE_REPLACED Here’s a mutlicartridge hack for the original NES that [Callan Brown] put together. He spent some time snooping around the signals on the circuit board seen above until he found the trace that maps the reset signal from the game console. This will be used to cycle through the various games stored on the cart’s memory chip. The ROM images that will be stored on this cartridge are concatenated, then burned to the EPROM. Since the donor cartridge (and the ROMs which were chosen) use memory managment, the hardware can be tricked into reading the ROM from a specific point in the EPROM.

The switching itself is handled by a 74HC161 binary counter chip. The reset signal from the on-board security chip acts as a clock trigger for the counter. Some clever wiring allows the output of the counter to select the starting address for the EPROM. Each time you press the reset button it increments the counter, thereby selecting a different ROM to load. See [Callan] demonstrate the finished hack in the video after the break.