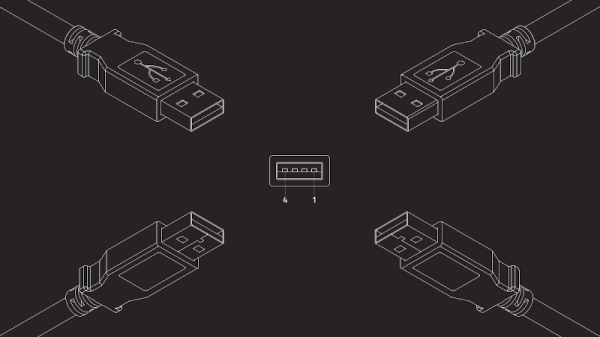 Updates from the enigmatic [NODE] are unfortunately few and far between these days. In fact his latest post is only the second time we’ve heard from the hacker in 2021. But as we’ve come to expect from his white-on-sorta-black releases, it certainly doesn’t disappoint.

Just in time to ring in whatever holiday you may celebrate, [NODE] has unveiled The Pinouts Book. A project he’s been working on for some time now with colleague [Baptiste], the free PDF download contains over 300 pages of high-contrast hardware diagrams and their respective pinouts. It’s about as straightforward as you can get, beyond the dedication page in the beginning, there’s not a word of fluff in the entire document. This is a work of hacker minimalism at its best, and we’re all about it.

From audio/video connectors all the way to development boards and single-board computers, The Pinouts Book sticks to the same format of a diagram and accompanying chart, making it exceptionally easy to find what you’re looking for. If you need more information than this streamlined layout can provide, each entry includes a link to a dedicated page on the book’s companion website. This will redirect you to supplemental data such as the manufacturer’s website, the part’s full datasheet, etc.

According to [NODE], the original plan for the Creative Commons BY-SA licensed work was to release it as a physical book, but the project ballooned up to such a scale that they realized it would be much easier to navigate and use as a digital document. While we don’t disagree, a physical release would certainly look lovely on our bookshelf. In the meantime, those who want to support the effort financially can purchase shirts emblazoned with diagrams pulled straight from the book’s pages.

We’ve long believed that a large-format electronic paper device would be an ideal gadget for the hacker’s workbench, as it allows for browsing through schematics and datasheets with a minimum of eye strain. Now we can also add a copy of The Pinouts Book to the list of things we’d install on our hacker-friendly e-ink compendium.

END_OF_DOCUMENT_TOKEN_TO_BE_REPLACED 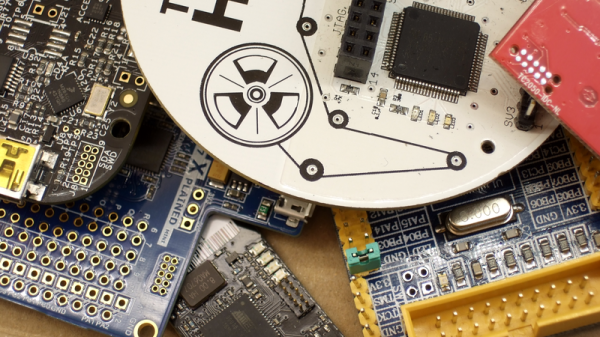 Wouldn’t it be great if there were just one standard for attaching to, programming, and debugging hardware?  If you could just plug in and everything would just work? Dream on, dreamer! But of course we hobbyists aren’t the only people to suffer from multiple standards. Industry has the same problems, writ large. In response to the proliferation of smart devices — microcontrollers, sensors, and their friends — on any given PCB makes it difficult to test them all, much less their function as a system.

The Joint Test Action Group (JTAG) got together in the mid-80s to make automated testing of circuit boards a standardized process. A JTAG port can be found on almost any piece of consumer electronics with enough brains to warrant it, and it’s also a tremendously useful entry point for debugging your own work and hacking into other’s. You’re going to need to use JTAG someday.

Implemented right, it’s a very cool system that lets you test any compliant IC on the board all from a single connector. It’s mostly used by hackers for its ability to run and halt individual processors, and put them in debugging modes, inspecting their memory states, etc. Essentially every microcontroller responds to JTAG commands, and it’s an incredibly widespread and powerful standard. A victory for rationality and standardization!

The connector pinout was, of course, left up to the manufacturer. The horror!

In principle, JTAG uses five signal lines. They form a chain starting at the debugger, where one device’s output is the next device’s input, until the result is returned back to the debugger.

END_OF_DOCUMENT_TOKEN_TO_BE_REPLACED 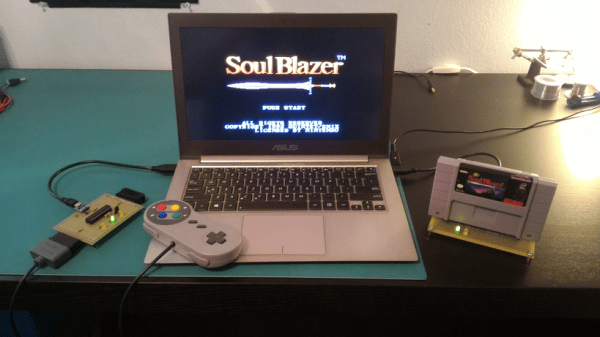 [Andrew Milkovich] was inspired build his own Super Nintendo cartridge reader based on a device we covered an eternity (in internet years) ago. The device mounts a real cartridge as a USB mass storage device, allowing you to play your games using an emulator directly from the cart.

This uses a Teensy++ 2.0  at its core. [Andrew] had to desolder the EEPROM pins from the SNES cartridge and reverse engineer the pinouts himself, but the end result was a device that could successfully read the cartridge without erasing it, no small accomplishment. The finished cartridge reader is build on some protoboard and we’d like to complement [Andrew] on his jumper routing on the underside of that board.

Of course, the experience of any console is just not the same without the original controller. So [Andrew] went a step further and made his own SNES controller to USB converter. This had the venerable Atmel ATmega328 at its core, and can be used separate from the cartridge reader if desired.