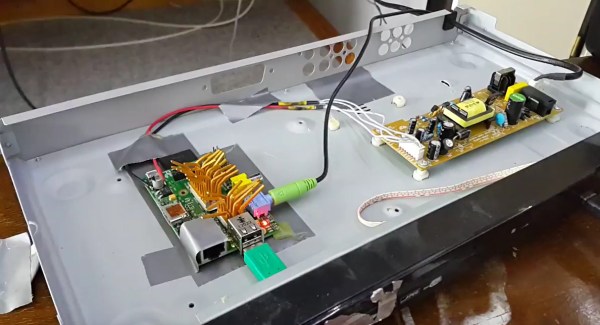 Most of the hacks we come across here at Hackaday don’t require much more than being “cool” to get our attention. But, every so often we find something that goes a step beyond that and does something truly good for the world. This is one such project, and its goal couldn’t be anymore altruistic: to allow the elderly to enjoy music, even when their declining vision and motor skills make traditional devices difficult to use.

It’s hard to overstate how important music is to people; there are few forms of art more emotionally effective. So, it was a major loss when an elderly relative of [DusteD] was no longer able to operate their CD player. Luckily, [DusteD] was there with an ingenious solution that uses RFID cards to play music from an always-on Raspberry Pi.

END_OF_DOCUMENT_TOKEN_TO_BE_REPLACED If your board fabrication and soldering skills are up to it, you can make your own tiny MP3 player. This rendition is just about half again as large as a standard SD card, whose slot is on the bottom of the board seen above. The heavy lifting is taken care of by a VS1011 MP3 decoder which also has its own stereo headphone driver on-chip. There’s no display and it seems that most of the 4k of program memory on the PIC 18LF88 is being used. Too bad, we’d love to take this to the next level, attaching it to the head unit in a car and spoofing the communications as if this were a CD changer.