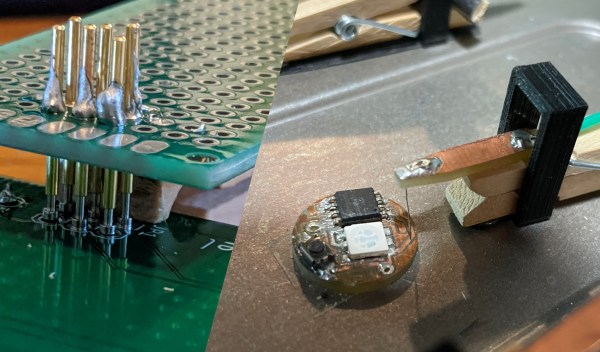 After browsing Thingiverse for some printable PCB probe designs, [Henry York] looked around and found a wooden clothespin on his desk. After some collaboration between his 3D printer and his CNC, Henry graced us with a nifty helper tool design that many of us might want to make in a pinch – a small, cheap and easy to make PCB probe, for circuits where soldering and headers are out of the question. Small magnets are glued to the clothespin, holding it flush to a magnetizable work surface (aka a toaster tray), and the probing itself is done by an extruder cleaning needle end. 3D printer and Edge.Cuts files are shared with us – thanks to Henry’s helpfulness, it should be easy to repeat if ever needed!

[Tyler Rosonke] (@zonksec) was programming a batch of badges and needed a reliable way to attach to a 6-pin ISP header – without actually soldering to the badges before they’re handed out to participants! A clothespin materialized nearby yet again – most likely, channeled from a different dimension by the spirit of numerous acrylic-cast pogopin-toothed clip-on tools we scroll by on Aliexpress. With a small perfboard piece and a bunch of pogopins jumping out of their respective drawers, it became no longer necessary to hold a bundle of male-ended pin header wires at a weird angle while nervously looking at the avrdude progress bar. This ended up saving a whole lot of time, something that’s always best spent on adding insidious bugs to the badge firmware (as well as, perhaps, easter eggs).

We’d love to hear about all the small hacks and improvements that you, hackers in our audience, invent. Whether it’s reusing a SOIC flashing clip for ISP programming or printing yourself an octopus-like contraption with needle probes, you should share it with us!