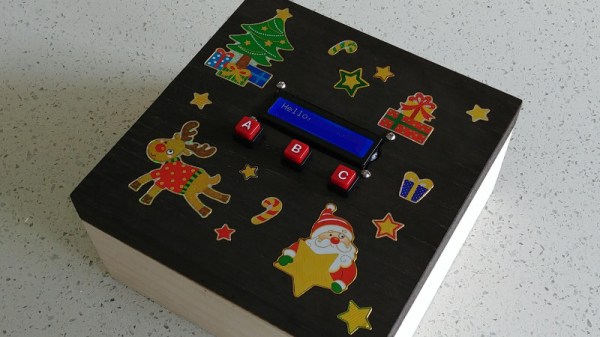 There’s something about impressing strangers on the Internet that brings out the best in us. Honestly, we wouldn’t be able to run this site otherwise. A perfect example of this phenomenon is the annual Reddit Secret Santa, where users are challenged to come up with thoughtful gifts for somebody they’ve never even met before.

For his entry into this yearly demonstration of creativity, [Harrison Pace] wanted to do something that showcased his improving electronic skills while also providing something entertaining to the recipient. So he came up with a box of goodies which is unlocked by the successful completion of a built-in trivia game tailored around their interests. If this is how he treats strangers, we can’t wait to see what he does for his friends.

There’s quite a bit of hardware hidden under the hood of this bedazzled gift box. The primary functions of the box are handled by an Arduino Nano; which runs the trivia game and provides user interaction via a 16×2 LCD, three push buttons, and a buzzer. Once the trivia game is complete, a servo is used to unlock the box and allow the recipient access to the physical gifts.

But that’s not the only trick this box has hidden inside. Once the main trivia game is complete, a ESP8266 kicks into action and advertises an access point the user can connect to. This starts the second level of challenges and gifts, which includes a code breaking challenge and gifted software licenses.

The project wasn’t all smooth sailing though. [Harrison] admits that his skills are still developing, and there were a few lessons learned during this project he is unlikely to forget in the future. Some Magic Smoke managed to escape when he connected his 5V Arduino directly to the 3.3V ESP8266, but at least it was a fairly cheap mistake and he had spares on hand to get the project completed anyway.

This project is reminiscent of reverse geocache boxes which only open when moved to a certain location, but the trivia aspect makes it perfect even for those of us who don’t want to put pants on just to receive our Internet gifts.

END_OF_DOCUMENT_TOKEN_TO_BE_REPLACED 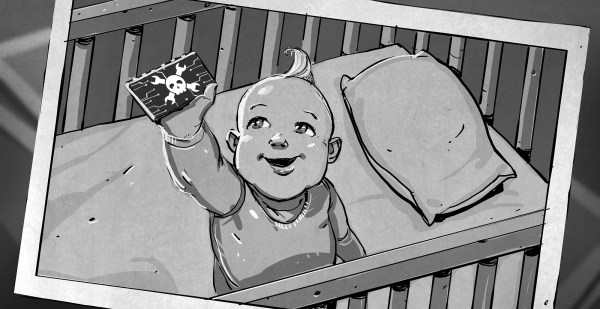 Necessity is the mother of invention. It is also true that invention necessitates learning new things. And such was the case on the stormy Tuesday morning our story begins.  Distant echos of thunder reverberated in the small 8 x 16 workshop, drawing my attention to the surge suppressor powering my bench.  With only a few vacation days left, my goal of finishing the hacked dancing Santa Claus toy was far from complete. It was for a Secret Santa gift, and I wanted to impress. The Santa moved from side to side as it sang a song. I wanted to replace the song with a custom MP3 track. In 2008, MP3 players were cheap and ripe for hacking. They could readily be picked up at local thrift shops, and I had picked up a few. It soon became clear, however, that I would need a microcontroller to make it do what I wanted it to do.

END_OF_DOCUMENT_TOKEN_TO_BE_REPLACED [Will] enjoys giving hacked items as Secret Santa gifts and this year he decided to augment a Billy Bass. These gag items have become a popular hack to use as a prop or to read your Twitter updates to you. Right of the bat he scrapped the original PCB and sent it to the gift’s future recipient as if he were a kidnapper extorting a family. He then set to work replacing the guts with a pair of PIC 18F452 microcontrollers. One uses power transistors to control the movement, the other controls an MP3 that handles the sound clips. The interface has some LEDs for added effect and uses a dial to select each sound clip which is displayed on a 4×20 character LCD.

The project has several voltage headaches as the motors operate at 6v and 4v, the microcontrollers and LCD display at 5v, and the MP3 is looking for 1.5v. That’s for voltages supplying this Frankenstein’d schematic. But he pulled it off, as you can see in the video after the break.