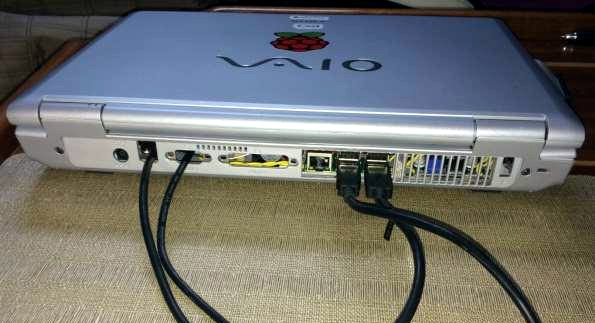 Early in November we took a look at a one of the best Raspberry Pi laptops we had ever seen, using the shell of a Sony VAIO. Laptops used to be hulking beasts, and that played into [Frank Adams’] hands as he got rid of the motherboard and had enough space to replace it with a Raspberry Pi and a few other support boards. This took advantage of the laptop’s screen, keyboard, LEDs, etc. But what’s a laptop without battery power? [Frank] hadn’t cracked that nut until now.

Adding battery power is trickier that it sounds, but [Frank] managed to get the Raspberry Pi to talk to the original Sony VAIO internal battery. His work on the project is shared, but this part of the story is best found starting on page 29 of his PDF project details.

Using the original battery is a good move since it’s designed to fit and has a charger ready to interface with the port on the laptop case. But these batteries have logic inside them, and there’s the rub. Communications use the 2-wire System Management Bus (SMBus) which is well documented. But the when trying to use the Pi’s I2C [Frank] couldn’t figure out to send a repeated start command.

He ended up writing his own C program that bit-bangs the communications he needed and now has the Pi speaking to the battery and listening to what it hears coming back. Reading through his description of this is fun since he includes his observations from a logic analyzer captures. He suspects an occasional bad read is due to Linux interrupting code execution. He watches for and catches these bad reads in software and can now reliably read all the battery vitals.

The hack leaves him with a system that functions in much the same way the original computer did: plug it in and it charges. He did add some hardware that lets him take a voltage reading from the battery using an ADC on the Teensy that was already present to control the keyboard and case LEDs. This adds a small constant draw on the battery, but for now he doesn’t leave the battery connected when the laptop is not in use.

If you’d like to read our original coverage of this laptop, here it is.

Raspberry Pi laptops are not an uncommon sight, as many hardware enthusiasts have shoehorned the tiny board behind LCD panels into home-made cases.

[Frank Adams] has created one of the best Pi laptops we’ve ever seen, (for which we suggest you skip straight to the PDF). He’s removed the guts from an aged Sony VAIO laptop and replaced it with the fruity computer, alongside a Teensy to handle VAIO keyboard, buttons, and LED I/O via the Pi USB port. An M.NT68676 video board interfaces the VAIO display to the Pi HDMI, and a USB to SATA cable is connected to a 240Gb solid state hard drive. The laptop’s Wi-Fi antenna is routed to the Pi via a soldered on co-axial connector, and there is also a real-time clock board. There are a few rough edges such as a USB cable that could be brought inboard, but it’s otherwise well-integrated into the case. His write-up is a very comprehensive PDF, that should serve as a good primer to anyone else considering such a laptop conversion.

The result is a laptop that looks for all the world like a commercially produced machine, yet that is also a Raspberry Pi. In a strange way, a Sony laptop is an apt homecoming for the board from Cambridge, because other than red soldermask or very early Chinese-made models, all Raspberry Pi boards are made in a Sony factory in Wales. Whatever the donor laptop though, this is definitely a step above the run-of-the-mill Pi laptops. To see its competition, take a look at this very ugly machine with a bare LCD panel, or this laser-cut sandwich laptop.

Sony recently started to shipping the VAIO P don’t-call-it-a-netbook netbook. It comes stock with 2GB of RAM, which means it’s not eligible for Microsoft’s XP ultra low cost pc licensing. Hackers wanting to exorcise Vista have run into a few issues. After doing her unboxing photoshoot, [tnkgrl] wrote a guide for replacing Vista with XP on the Vaio P. She used the Universal Extractor to pop open the driver downloads and remove the Vista check. This got the WWAN radio and GPS working in XP. The only casualty was the volume and mute buttons are no longer working. You can see an annotated image verifying all the components here.

This Sony Vaio UX50 came with a 30GB hard drive from the factory. This hacker wanted to do an upgrade and move to solid state, so he started hacking away. He ended up with a total of 64GB of solid state storage crammed into the computer.  The hard drive was replaced with a 4GB compact flash drive and the rest is spread through out the device. Apparently any crevice or crack in the Sony UX50 can have memory shoved into it. He managed to somehow get 60GB of storage in there through various USB extensions and adapters. Notice the sticker on the inside of the case. Is this the latest fad? Decorating the inside of the unit where only you know it exists?