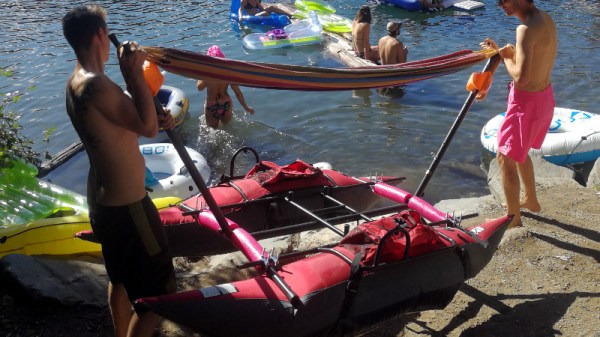 If you’re enjoying a Western Canadian summer, two of the best ways to do so involve a hammock, or a boat. Seeking to improve on this mighty duo with a hammock-boat combo, [Jarrett] describes his progress at Vancouver Hack Space.

The boat he chose was a one-person catamaran with an aluminium frame and what appear to be inflatable pontoons, while the hammock is one designed for a garden or patio with a steel tubular frame. A design goal was to not modify or destroy the structure of either item, so the challenge was to securely mount the two frames together. A variety of false starts involving bent steel or aluminium were tried, followed by a final success with the aluminium tubes reinforced with more tube inside them, and the hammock attached with U-bolts.

The testing took place on what appears to be a public lake, and the contraption floated well. When it had been pushed out to a landing stage our intrepid adventurer boarded the hammock —  and promptly the whole edifice tipped itself over, depositing him in the drink. Further experimentation revealed that balance was critical, and a revised position could achieve a stable boarding. He paddles off into the sunset as you can see in the video below the break, though as his friends remind him, without his beer.

Commercial hammocks are surprisingly expensive for what they are. Don’t worry though, if you find them to be beyond your budget you can always make a frame for one yourself.

END_OF_DOCUMENT_TOKEN_TO_BE_REPLACED

Spoiler alert: group of fun-loving French folks build an animal-or-human-powered merry-go-round that spins fast enough to fling all takers into the lake (YouTube, embedded below). Actually, that’s basically it. The surprise is ruined, but you probably want to check out the video anyway, because it looks like a ton of fun. 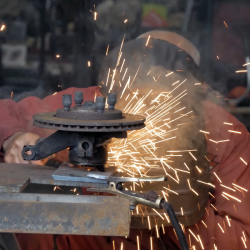 Granted, you may not have a well-stocked metal shop or a team of oxen up by the lake wherever you live, but there are certainly details in the video that will survive in translation. Basically, the team took the axle off of a junked car, attached it to a pole in the middle of the lake, made a large wooden drive wheel, and wrapped an infinite length of rope around it.

[Charles] from [Mad Cow] wrote us that there was about a 10:1 ratio between the drive wheel and the arms of the people-flinger. So if the cattle were pulling at 3 km/h, the human angular velocity was a brisk 30 km/h! Then it’s just a matter of convincing a team of cows, or a team of soccer players (?), to put their backs into it.

The [Mad Cow] crew seems to have more than their fair share of dangerous fun up at their summer hideaway: check out their human crossbow that we featured a few years back.

END_OF_DOCUMENT_TOKEN_TO_BE_REPLACED