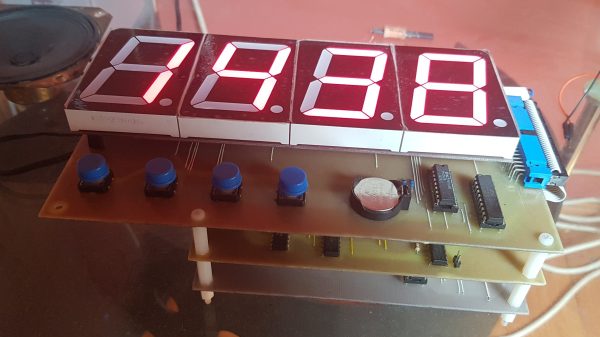 Any smartphone or laptop could be a talking clock if you wished it so. However, we think this build from [Marek Więcek] is more fun, which uses discrete vintage chips to get the job done the old fashioned way.

The work started when [Marek] was tinkering with a 65C02 CPU, giving it an EPROM, some RAM, and some logic ICs to create something akin to a modern microcontroller in functionality. It came to be known as the 6502 Retro Controller Board. Slowly, the project was expanded with various additional modules, in much the same way one might add shields to an Arduino.

In this case, [Marek] expanded the 6502-powered board with a series of 7-segment displays, along with an RTC to keep accurate time. A classic SP0256-AL2 speech synthesis chip was then added, allowing the system to not only show the time, but read it aloud, too. As a bonus, not only can it tell you the hour, minute, day, and date, but it will also read various science-fiction quotes on demand.

Like most 80s speech synths, the output is robotic and a little difficult to parse. However, that’s part of the charm that makes it different compared to the speaking virtual assistants of today.

END_OF_DOCUMENT_TOKEN_TO_BE_REPLACED 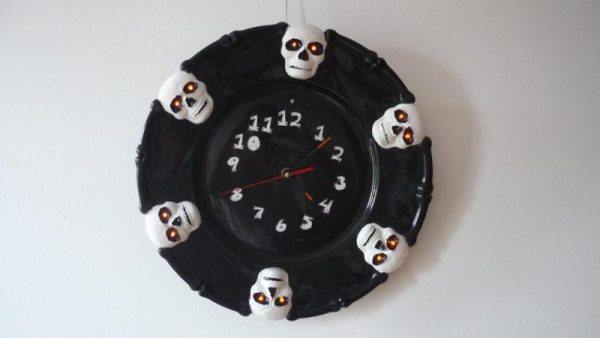 Many of us learn to read clocks at a young age, however, talking clocks eliminate the need to do that entirely. [Alberto] whipped up one of his own, in this case designed with some Halloween holiday spookiness.

A basic clock movement is used to display the time in the typical fashion. However, the movement also features a built-in trigger signal, which it sends to an attached microcontroller on the hour, every hour. The build relies on the Raspberry Pi Pico for sound, chosen for its USB programming interface and its 2 MB of onboard flash storage. Sound is stored in simple 16-bit WAV files, and played out to a speaker via a PWM output. Alternatively, a CircuitPython version of the code is available that uses MP3s instead. A light sensor is used to avoid triggering any sounds at night time that could disturb one’s sleep. The entire circuit can be built on a single-sided board. [Alberto] etched one at home in the old-fashioned way, though one could also order one online, too.

Halloween is an excellent time for hacks, and this year we have the Halloween Hackfest contest to show them off. It’s ending soon though, you have until the stroke of midnight Pacific time on Friday (that’s the moment Thursday night ends) to enter your Halloween-themed hacks.

Talking clocks have been around for some time, but are nevertheless a fun and educational project to build. We’ve seen some other great Halloween hacks lately, too. If you’ve been busy with projects this fall holiday, don’t hesitate to drop us a line! 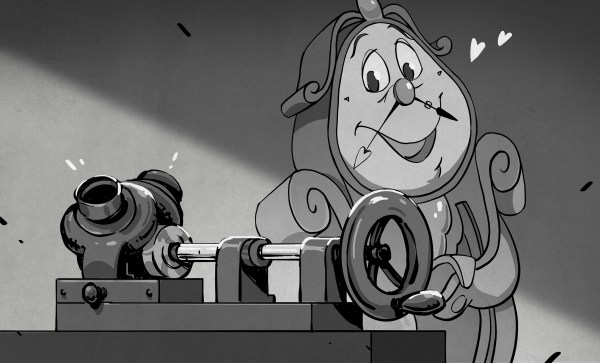 Do you talk to your alarm clock? I do. I was recently in a hotel room, woke up in the middle of the night and said, “Computer. What time is it?” Since my Amazon Echo (which responds to the name Computer) was at home, I was greeted with silence. Isn’t the future great?

Of course, there have been a variety of talking clocks over the years. You used to be able to call a phone number and a voice would tell you the time. But how old do you think the talking clock really is? Would you guess that this year is the 140th anniversary of the world’s first talking clock? In fact, it doesn’t just hold the talking clock record. The experimental talking clock Frank Lambert made is also the oldest surviving recording that can be still be played back on its original device.

In 1878, the phonograph had just been invented and scratched out sounds on a piece of tin foil. Lambert realized this wouldn’t hold up to multiple playbacks and set out to find a more robust recording medium. What he ended up building was a clock that would announce the time using lead to record the speech instead of tin foil.