There are myriad file transfer services on the web. Streamfile tries to set itself apart by providing a unique secure service. Their file upload system is all JavaScript and doesn’t rely on Flash. It uses SSL to secure the file transport. As soon as you start uploading the file, you can hand the link off to your recipient and they can start downloading without waiting for the upload to complete. The free limit is 150MB, but their PRO service allows 2GB files. 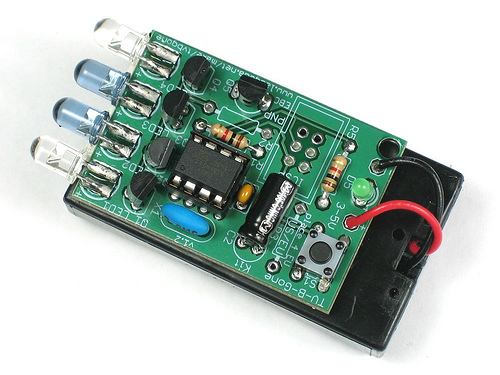 Recently, our friends over at Adafruit released a new version of their popular TV-B-Gone kit. Built in cooperation with [Mitch Altman], the inventor of the TV-B-Gone, the new kit sports four high power IR LEDs, two wide beam and two narrow beam. The four LEDs give the new TV-B-Gone increased range, with a maximum distance of over 150ft. One of the most impressive features of the kit is the fact that the new TV-B-Gone is universal and can now work in Europe and Asia in addition to the US. Users are able to select which region they want to use during the build process by soldering a resistor into the board at their region’s corresponding spot as seen in the picture above. The new TV-B-Gone kit is now available in the Adafruit store for $19.95 plus shipping.

In the last few days, rooting the T-Mobile G1 and myTouch 3G has become much easier. [Zinx] released FlashRec which lets you flash a new recovery image onto your Android phone. It takes advantage of Linux kernel vulnerability CVE-2009-2692. The app lets you backup your current image and then flashes Cyanogen’s Recovery Image 1.4. Once that’s done, you can use any custom Android build you want. Android and Me has documented the entire process on their site and points out the ridiculously large number of custom ROMs that are out there. Embedded below is a video from [unknownkwita] showing the rooting process.

END_OF_DOCUMENT_TOKEN_TO_BE_REPLACED

Inspired by the multitudes of other automated window blind projects, [John] decided to build his own simpler design. Knowing his Arduino was massive overkill (yes, we hear you all cheering) he picked up a picaxe 08m starter kit.  Looking at his very simple circuit, you’ll notice there are no resistors or capacitors.  He designed it to take commands from his PC via IR. The final product is fairly well hidden, and should his girlfriend ever be upgraded to wife, we assume he’ll hide it better. Good job [John]. We’re no strangers to automated blinds, we’ve seen them a few times.

Surprisingly the Xbox 360 hasn’t seen a lot of homebrew action. [tmbinc] has taken it upon himself to port the Snes9x emulator to it. There’s no pretty GUI, and its not running on top of linux or anything. This is native, directly to the hardware emulation. He believes this is the first to do so. Unfortunately, it will not work on the most up to date Xbox 360s.

[Dennis] points out that the iPod shuffle and the iPod remote are almost identical visually. He decided to combine the two so he always had his remote with him. He pulled the guts out of a remote and mounted them in a shuffle. The remote functions all of the time, while the shuffle only turns on when you insert headphones. We wonder if he accidentally does stuff on his computer while he’s changing songs.

[Harandi] wrote to us to let us know about a project he’s working on to improve our nightly rest. This is the Happillow. The Happillow is an alarm clock, as well as a snore relief system. We’re not sure that the snoring bothers us so much, but we’re sure our significant others appreciate that part. While pillows exist that are supposed to cut down on snoring, they generally have a specific shape to position your head properly, which should cut down on the snores. [Harandi] points out that this might be embarrassing to the user as it is obvious to anyone looking at the bed that they have a snore reducing pillow. The Happillow detects the noise and agitates you to get you to reposition yourself. We have actually seen a very similar project in the past with the Interactive Pillow project.