Instructables user [Bruno] recently constructed a fun little toy that brings a bit of the Mario nostalgia out of the video game universe and into ours. His Super Mario coin block is instantly recognizable from the first Mario game and performs just as you would expect it to. Punching or tapping the bottom of the block releases coins one at a time, complete with sounds straight from the game.

The coin block is constructed from thick cardboard and wrapped in color mock ups of the in-game block. Inside, a spring-loaded tube of coins is placed above a launch arm which is also connected to a spring. A servo actuated arm pulls the launch arm down, dropping a coin from its tube on to the launch arm which is then flung from the top of the box once the servo arm rotates far enough. When this occurs, the built-in MP3 player is triggered to play the “coin sound” from the game. A 555 timer is used to ensure the servo actuated arm rotates once per activation, and a LM386-based amplifier is used to increase the output volume of the MP3 player, both of which operate using rechargeable batteries.

Be sure to check out some of the inner workings as well as the final product in the videos embedded below.

END_OF_DOCUMENT_TOKEN_TO_BE_REPLACED 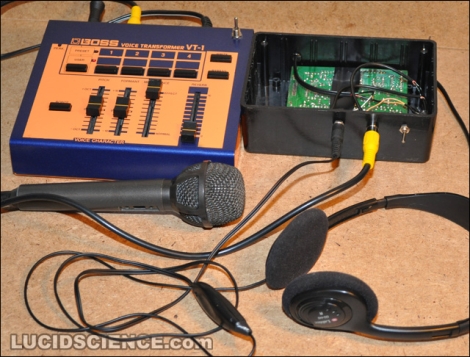 Have you ever wanted to be someone else, at least over the phone? Do you dream of turning the tables on telemarketers, making them hurry to get off the line instead of you? If so, [Brad] over at LucidScience has the project for you.

A bit of a prankster at heart, he walks through the conversion of a normal telephone into a Data Access Arrangement device (DAA), allowing you to interface it with either hardware or software-based audio mixers.

The process can be completed in a relatively short time period, and doesn’t require much more than an old telephone, a handful of tools, and some miscellaneous switches and jacks. He disassembled a telephone and trimmed off all of the unnecessary circuitry while retaining most of the original functionality. Line in and out jacks were then installed in place of the handset microphone and speakers, respectively. The final result is a compact box that relays altered audio from any kind of mixing device to person at the other end of the call. Since the majority of the phone remains intact, your calls still sound natural as they pass through the phone’s existing voice filter and preamp circuitry.

Once the DAA is complete, you can use any number of effects on your voice, limited only by your audio mixer. [Brad] says he has long-time friends that don’t even recognize his voice after he has run it through his effects machine, so get started on yours before April Fool’s day arrives!

[Julian] was rummaging through a military surplus store when he spotted a pair of old helicopter pilot helmets that he absolutely had to have. At $25 they were a steal, but pretty useless in their current state. He decided to modify one of the helmets for use while playing video games, but he didn’t stop there.

The helmet had two decent speakers built-in so he kept them, but tweaked the wiring from a mono-only configuration to accept stereo input. A RF wireless headset was disassembled and wired into the helmet so he could use it for playing video games while his wife is asleep. As an added bonus, the headset he used happened to have an AM/FM receiver built in, so he can enjoy music while sitting around with his helmet on as well. A Bluetooth cell phone headset was also torn down and wired into the helmet for gaming and handling phone calls. The Bluetooth mic was extended into the original mic stem built into the helmet, keeping things authentic-looking.

Overall it’s a quite a useful recycling of some old military junk. It’s a great idea though the helmet looks like it could be a touch cumbersome after awhile. [Francois] over at 1024 Architecture has been working on a project we think you’ll be likely to see in a professional music video before too long. Using his Kinect sensor, ha has been tracking skeletal movements, adding special effects to the resulting wire frame with Quartz Composer. While this idea isn’t new, the next part is. He takes the QC tweaked video stream and then projects it back over the performer using MadMapper to match the video to the body movements, recording the resultant display.

The project started out with a few hiccups, including a noticeable delay between the body tracking and the display. It caused the performer to have to move more slowly than he would like, so things had to be tweaked. [Francois] first tested the latency between his computer and the projector by displaying a timecode representation on the screen as well as via the projector. He found the projector to have a latency of 1 frame at 60 fps, which wasn’t too bad. This led him to believe the culprit was his Kinect, and he was right.  There was a 6 frame delay, so he locked the video output to 30 fps in hopes of cutting that delay in half.

The effect is slightly reminiscent of Tron, but with more distortion. We can’t wait to see more projects similar to this one in the future.

The resulting video embedded below is pretty cool in our opinion, but you can judge for yourself.