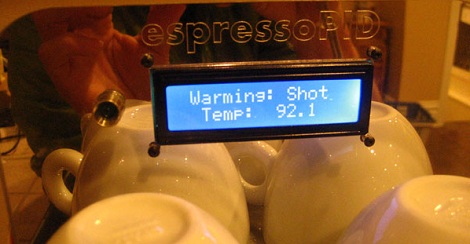 The heat sensor in [Cameron]’s espresso machine doesn’t work very well. He sees some pretty crazy variations in temperature when pulling an espresso shot, and when the boiler is just sitting there the heater element will heat the water full-bore then shut off for a while. Since this is a pretty low bar from a control theory standpoint, [Cameron] decided on a PID makeover on his espresso machine.

Instead of going with a commercial PID controller like we’ve seen on a few kitchen hacks, [Cameron] decided to roll his own Arduino derivative based on an ATMega328 microcontroller. The newly designed board reads the state of the ‘Steam’ button, a few relays for controlling the heater and the pump, and of course an LCD display.

[Cameron] still has to do a little tweaking to get his PID algorithm down, but already the new control board keeps a much more stable temperature than the old thermostat. The fancy new bezel and LCD display adds a lot of techy class to his espresso machine, to boot. In 1966, [Gene Roddenberry] introduced fully manual doors powered by a stagehand on Star Trek. The fwoosh sound of the door was later dubbed into each show, but progress marches on, and now [Alex] created his own Star Trek-style automatic doors for his house.

The build includes a ‘control panel’, and [Alex]’s door operates in three modes: Open, and stay open; Close, and stay closed; and Automatic. The control panel itself is fairly remarkable. A small puck interacts with a magnetometer underneath [Alex]’s counter. If the puck is pointed towards ‘Open’, the door stays open. If the door is pointed towards ‘Closed’, the door stays closed. If the puck isn’t near the magnetometer, the door operates in automatic mode with the help of a few IR sensors to detect someone trying to get in or out of [Alex]’s kitchen.

For the mechanical portion of the build, [Alex] used a One meter long piston with the quietest air compressor he could find. We can’t tell from the video after the break if the compressor ever kicks in, but [Alex] says it’s about the same volume as his fridge. As a small added bonus, the new automatic door does have a fwoosh sound, just like [Gene] would have wanted.

END_OF_DOCUMENT_TOKEN_TO_BE_REPLACED The Queen of Bondo is back again, this time with an adorably small NES portable, the HandyNES.

When last saw [lovablechevy], she had just finished up her build of a Nintenduo, a build that stuffed an NES and SNES into a single box. The Nintenduo was such a clean build it would be a crime to let her talents go to waste, so [Lovablechevy] finished up one of the smallest NES portables we’ve seen.

The build is based on a top-loading NES with a 3.5″ screen. [rekarp]’s NES2 composite mod was used to get the NES and screen working together. Two LiIon batteries provide 3 hours of play time (with a low battery indicator, natch).

[lovablechevy] also included an AV out so she can connect her HandyNES to a larger CRT screen. Like our old Sega Nomad, this allows for a little two-player action – player one using the HandyNES and player two using an extra controller. Support for the Zapper was also included after modding the Zapper connection to a USB port.

Check out the video walkthrough after the break. To prove that her build isn’t a clone, [lovablechevy] also include a video of herself playing Battletoads past the point where the clones crash. Excellent work from the Queen of Bondo.

END_OF_DOCUMENT_TOKEN_TO_BE_REPLACED