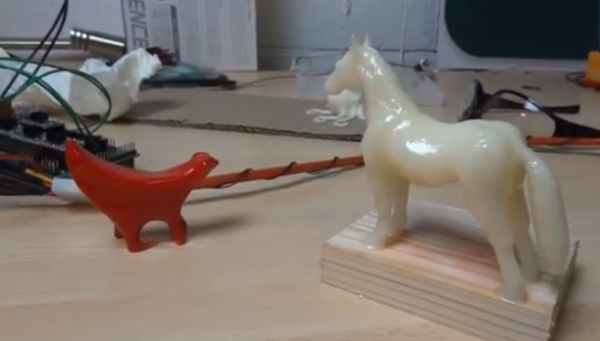 If you’ve ever used an extruding 3D printer, you know that the resulting prints aren’t exactly smooth. At the Southackton hackerspace [James] and [Bracken] worked out a method of smoothing the parts out using vapor. The method involves heating acetone until it forms a vapor, then exposing ABS parts to the vapor. The method only works with ABS, but creates some good looking results.

Acetone is rather flammable, so the guys started out with some safety testing. This involved getting a good air to fuel mixture of acetone, and testing what the worst case scenario would be if it were to ignite. The tests showed that the amount of acetone they used would be rather safe, even if it caught fire, which was a concern several people mentioned last time we saw the method.

After the break, [James] and [Bracken] give a detailed explanation of the process.

END_OF_DOCUMENT_TOKEN_TO_BE_REPLACED Ah R2D2. Probably one of the most recognized little robots on the planet. There have to be a hundred different toys of R2 out there, but one of the more impressive is the 30th Anniversary Interactive edition. Complete with all kinds of bells and whistles, it’s about as realistic as they come. One Star Wars fan found himself in possession of a broken Interactive R2, and with his girlfriend’s birthday coming up, decided to do a little droid surgery to create the ultimate gift.

Giving Anakin a run for his money, all the controls for this R2 unit were custom built.  A Raspberry Pi running Rasbian acts as the brain. Facial recognition was implemented using OpenCV. Voice commands in either English or Chinese were made possible by PocketSphinx. Some of the other features he included are: message recording and playback, ultrasonic distance detection, motion detection, wifi, and a rechargeable battery. Many of those features were included in the original toy, but since this unit was broken, had to be rebuilt from scratch.

In the end, it must have impressed his girlfriend – she’s now his wife. Good work Jedi. Check out some build photos and a video demonstration after the break.

END_OF_DOCUMENT_TOKEN_TO_BE_REPLACED We agree with [Zapmaker] that Canon cameras chew through nickel metal hydride batteries. But we’re not going to use Alkaline because we think it’s wasteful. His solution is to use a battery that has a higher voltage rating. What you see here is a single lithium iron phosphate cell paired with a dummy cell to increase life between charges.

The reason that NiMH batteries don’t last very long is that they’re only rated at 2.4V. It won’t take long for that voltage to drop below the camera’s cutoff threshold since they didn’t start very high to begin with. But a single LiFePO4 cell has the same form-factor but produces 3.2V and maintains voltage well through it’s discharge cycle.

The size is right, but using one cell won’t work by itself. He built a filler for the other slot which is just a wood dowel with a screw all the way through it. The point was ground down and a bit of foil added to ensure a proper connection. We’d be interested to hear back about how this performs over the long term. Odds are you played the game of Operation when you were a kid. The classic electronic toy challenges you to use a tethered tweezers to extract plastic pieces without touching the sides of the holes they’re hiding in. This upgrade makes the challenge more interesting for a grown-up audience. If you touch the sides you won’t hear a jarring sound, you’ll get a painful shock!

The modification starts by clipping off the melted plastic portions that hold the paperboard face plate on the game. From there the original electronics are completely removed. We think this a bit of a mistake as we’d still like spectators to hear the sound as the player gets a shock. But we digress. The circuit board from a disposable camera is patched into the game. A wrist band forms an electrical connection with your body, providing a path for the camera’s flash capacitor to discharge if you happen to touch the sides with the tweezers.

This write-up is missing one important thing: video of someone getting shocked. [Psycosisnine] promises to add some soon, but for now you’ll just have to fall back on our absolute favorite Mindflex shock project.

We consider ourselves fairly cautions Internet warriors. We know when to watch out for malicious links and tread lightly during those times. But this hack will still bite even the most cautions of link followers. It’s a hack that changes where a link is sending you after you click on it.

The concept is driven home right away by a link in the post which lists PayPal as the target when you hover over it with your mouse. Clicking on it will give you a warning that it could have been a malicious page you were redirected to. Of course the address line of the page shows that you were sent somewhere else, but it’s still an interesting issue. The hack is accomplished with just a few lines of JavaScript. In fact, the original example was 100 characters but a revision boils that down to just 67.

So who’s vulnerable to this kind of thing? It sounds like everyone that’s not using the Opera browser, which has been patched against the exploit. There are also some updates at the bottom of the post which mention that Firefox has been notified about it and Chrome is working on a patch.