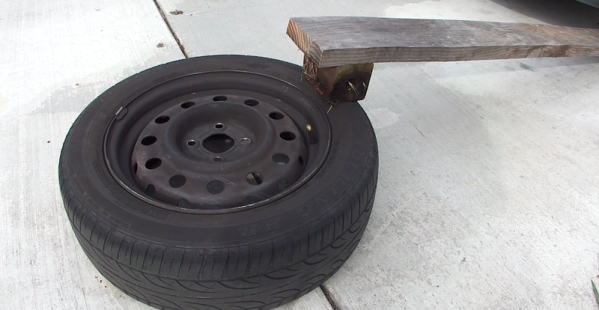 Your car’s tire is losing air from the valve stem — what do you do? Well you could take it to the mechanic and pay upwards of $30 to replace it… or you could try this MacGyver style approach!

Not wanting to take his car to the shop, [David] tried several ways of knocking the tire off its bead. Hitting it with a sledge hammer… Jumping on it… throwing it against the ground… In the end, he realized leverage would be his friend! He’s constructed a tool out of a few pieces of wood — simply place it on the tire near the valve stem, and then drive up the wood with your car. The weight of the car easily compresses the tire leaving you just enough room to pull the tire valve stem out, and put a new one in.

It’s pretty much the same method shops use, they just have a machine to do it for them — because of this, so we don’t think this would hurt your tire. As always though, we’d love to hear what you guys think in the comments! Stick around for the video to see [David’s] process.

END_OF_DOCUMENT_TOKEN_TO_BE_REPLACED

Above are two FTDI FT232RL chips, an extremely common chip used to add a USB serial port to projects, builds, and products. The one on the left is a genuine part, while the chip on the right was purchased from a shady supplier and won’t work with the current FTDI drivers. Can you tell the difference?

[Zeptobars], the folks behind those great die shots of various ICs took a look at both versions of the FT232 and the differences are staggering. Compared to the real chip, the fake chip has two types of SRAM etched in the silicon – evidence this chip was pieced together from different layouts.

The conclusion [Zeptobars] reached indicated the fake chip is really just a microcontroller made protocol compatable with the addition of a mask ROM. If you’re wondering if the FTDI chips in your part drawers are genuine, the real chips have laser engraved markings, while the clone markings are usually printed. END_OF_DOCUMENT_TOKEN_TO_BE_REPLACED

Brian has graciously allowed me to hop on the 3D Printering bandwagon to write a brief intro to the wonderful world of Solidworks. We’ll be making the same ‘thing’ as done in the previous ‘Making a Thing’ tutorials: Admittedly, most Hackaday readers probably don’t have Solidworks as it is a very expensive program. The main reason we are posting this tutorial is so that you can understand the work flow and compare it to some of the free/open packages out there.

END_OF_DOCUMENT_TOKEN_TO_BE_REPLACED

Thought GNU Radio was just for radio? Think again. [Chris] has been hard at work turning the signal generation and analysis of the best tool for software defined radio into a networking device for speakers and a microphone.

The setup uses GNU Radio to generate a carrier signal whose frequency is modulated with a data stream. With this modulated signal piped over a laptop’s speakers, [Chris] is able to send UDP packets across his desk using nothing but sound.

[Chris] had recently used a similar technique to transmit data via audio with GNU Radio, but this latest build is a vast improvement; this is now a duplex networking, meaning two computers can transmit and receive at the same time.

In the end, [Chris] created a strange, obsolete device called a “modem”. It’s not exactly fast; sending ‘Hello World’ takes quite a bit of time, as you can see in the video below.

END_OF_DOCUMENT_TOKEN_TO_BE_REPLACED