For now the circuit is wired up on a couple of breadboards, but it might be a good idea to use something more permanent. [Jason] could always take it a step further and learn to etch his own PCB’s. Or he could even design a board in Eagle CAD and order a real printed board. Don’t miss the video description of the RFID system below. END_OF_DOCUMENT_TOKEN_TO_BE_REPLACED

END_OF_DOCUMENT_TOKEN_TO_BE_REPLACED [Anton] recently acquired a broken Nintendo 3DS. When the power button was pressed, the device would start booting up only to shut back down after flashing a blue light and making a popping sound. It turns out this problem is pretty common with the 3DS.

[Anton] could have tossed this device into the landfill, but where’s the fun in that?  Instead, he cracked the device open like any self-respecting hacker would. It didn’t take him long to discover two broken flex ribbon cables. [Anton] could have then searched for replacement cables, but his inner hacker told him he could repair this himself. He carefully scraped the insulation off of the broken traces and then soldered on some hair thin wires to bridge the gap.

All that was left to do was to glue the wires securely in place and feed them back through the hinges. This project is a great example of how a little determination and know-how can keep a useful device from the landfill. If you attempt this repair yourself, you may find this 3DS teardown to be a helpful reference. What devices have you been able to save from an untimely demise? 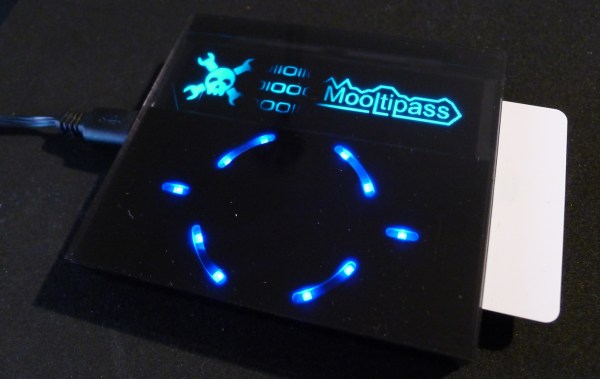 It has been a while since we wrote an article about our ongoing offline password keeper project, aka the Mooltipass. Our last post was asking our dear readers to vote for their favorite card art, so what have we been doing since then?

For the last few weeks we’ve mostly been improving our current PCBs and case design for the production process to go smoothly. The final top PCB shown above has been tweaked to improve his capacitive touch sensing capabilities, you may even see a video of the system in action in the Mooltipass project log on hackaday.io. We’ve also spent some time refining the two most popular card art designs so our manufacturers may print them correctly. We’ll soon integrate our updated USB code (allowing the Mooltipass to be detected as a composite HID keyboard / HID generic) into the main solution which will then allow us to work on the browser plugin.

It’s also interesting to note that we recently decided to stop using the GPL-licensed avrcryptolib. Our current project is CDDL licensed, allowing interested parties to use our code in their own project without forcing them to publish all the remaining code they created. The GPL license enforces the opposite, we therefore picked another AES encryption/decryption implementation. This migration was performed and checked by our dedicated contributor [Miguel] who therefore ran the AES NESSIE / CTR tests and checked their output, in less than a day.

We’re about to ship the first Mooltipass prototypes to our active contributors and advisers. A few weeks later we’ll send an official call for beta testers, just after we shown (here on Hackaday) what the final product looks like. Don’t hesitate to ask any question you may have in the comments section, you can also contact us on the dedicated Mooltipass Google group. END_OF_DOCUMENT_TOKEN_TO_BE_REPLACED

We’ve been busy contacting design tech and electrical engineering education departments to tell them about The Hackaday Prize, but there are only so many of us and we could do with your help to get the word out.

Are you excited about The Hackaday Prize? Do you think more people at your school should know about it so they can take part? Either way, please help us help them by emailing prize@hackaday.com to let us know what program coordinators, student group, or other people we should contact. If appropriate, we have a bunch of promotional materials we would like to send out to some of these awesome hackers.

You can also help us by telling your hacker designer friends, posting about The Hackaday Prize on college social media (#HackadayPrize), or letting the student newspaper know. We want to get as many universities, colleges and high schools involved as possible. Many senior year project ideas would make great starting points for THP entries, and we want to make sure students take up this opportunity to show off what they can do (and hopefully win some stuff in the process). This makes a great summer project, and looks great when applying for colleges or jobs in the future.

Remember you have until August to get your entry in, but the sooner you post it on Hackaday Projects, the sooner you can potentially start winning rewards. We have hundreds of tshirts, stickers, patches, posters and other swag up for grabs on the way to winning The Hackaday Prize. If you’re an aspiring film maker hoping to be the next [J.J. Abram] with a mild (severe?) obsession with lens flares, then this Instructable is for you!

Modern camera lenses are designed to prevent lens flare, but sometimes, just sometimes, you want a cool lighting flare in your video. Of course you could add them in post production, but that’s kind of cheating, and if you don’t have expensive video editing software, not very easy to do either.

Now you could just throw a super bright LED flashlight on set and hope for the best, but you’ll never get that cool Star Wars or Star Trek blinding purple line… unless you add something on your camera to help scatter the light! [Jana Marie] has figured out just how to do that. END_OF_DOCUMENT_TOKEN_TO_BE_REPLACED