END_OF_DOCUMENT_TOKEN_TO_BE_REPLACED

Over on the University of Reddit there’s a course for learning all about FPGAs and CPLDs. It’s just an introduction to digital logic, but with a teacher capable of building a CPLD motor control board and a video card out of logic chips, you’re bound to learn something.

The development board being used for this online course is an Altera EMP3032 CPLD conveniently included in the Introduction to FPGA and CPLD kit used in this course. It’s not a powerful device by any measure; it only has 32 macrocells and about 600 usable gates. You won’t be designing CPUs with this thing, but you will be able to grasp the concept of designing logic with code.

Future lessons include building binary counters, PWM-controlled LEDs, and a handheld LED POV device. In any event, it’s a great way to learn about how programmable logic actually works, and a fairly cheap way to get into the world of FPGAs and CPLDs. Introductory video below.

END_OF_DOCUMENT_TOKEN_TO_BE_REPLACED END_OF_DOCUMENT_TOKEN_TO_BE_REPLACED

When you think about the difficulties of working with surface mount components, the first thing that often comes to mind is trying to solder those tiny little parts. Instead of soldering those parts by hand, you can actually apply solder paste to the pads and place all of the components on at once. You can then heat up the entire board so all of the parts are soldered simultaneously. It sounds so much easier! The only problem is you then need a solder stencil. You somehow have to get a thin sheet of material that has a perfectly sized hole where all of your solder pads are. It’s not exactly trivial to cut them out by hand.

[Juan] recently learned a new trick to make cutting solder stencils a less painful process. He uses a laser cutter to cut Mylar sheets into stencils. [Juan] appears to be using EagleCAD and Express PCB. Both tools are available for free to hobbyists. The first step in the process is to export the top and bottom cream layers from your CAD software.

The next step is to shrink the size of the solder pads just a little bit. This is to compensate for the inevitable melting that will be caused by the heat from the laser. Without this step, the pads will likely end up a little bit too big. If your CAD software exports the files as gerbers, [Juan] explains how to re-size the pads using ViewMate. If they are exported as DXF files, he explains how to scale them using AutoCAD. The re-sized file is then exported as a PDF.

[Juan’s] trick is to actually cut two pieces of 7mil Mylar at the same time. The laser must be calibrated to cut all the way through the top sheet, but only part way into the bottom piece. The laser ends up slightly melting the edges of the little cut out squares. These then get stuck to the bottom Mylar sheet. When you are all done cutting, you can simply pull the sheets apart and end up with one perfect solder stencil and one scrap piece. [Juan] used a Full Spectrum 120W laser cutter at Dallas Makerspace. If you happen to have this same machine, he actually included all of the laser settings on his site. 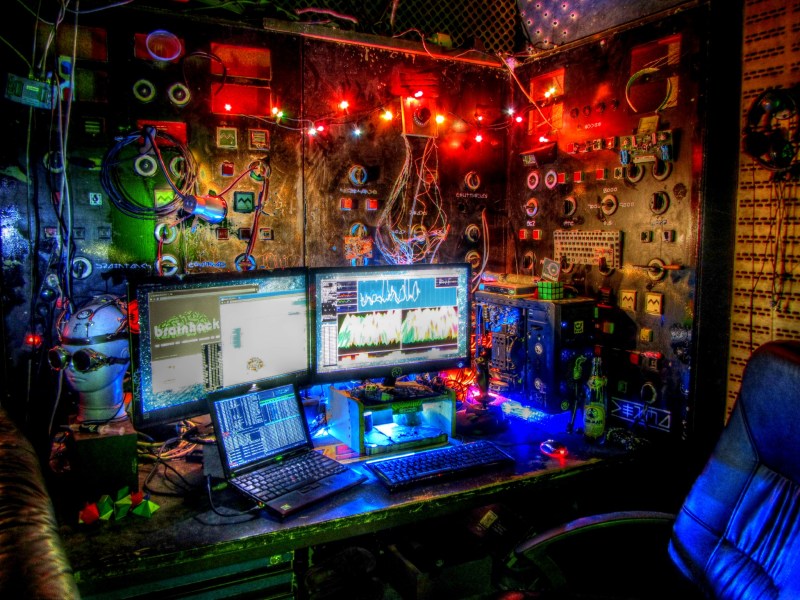 Yesterday we said we’d be giving away an awesome oscilloscope to a random person on Hackaday Projects if they have voted for their favorite project in The Hackaday Prize. We’re doing one of these a week, and today, at least, nobody won.

We’re going to be doing this every week, so register at Hackaday Projects and vote for your favorite projects entered in The Hackaday Prize. We’ll do this again next week. The demoscene is alive and well, with new demos coming out on a multitude of platforms, including oscilloscopes. Beams of Light is a new demo released at @party in Boston by [TRSi]. Beams isn’t the usual .EXE file format for PC based demos. It’s distributed as a 4 channel wave file. The rear left and right channels are stereo audio. The front channels, however, are vector video to be displayed on an oscilloscope in XY mode.

Beams of Light isn’t the first demo to use an oscilloscope. Youscope and Oscillofun preceded it. Still, you can see [TRSi] pushed the envelope a bit with his creation. He used Processing and Audacity to create the vector video, and his own line tracing algorithm to reduce flyback lines.

[TRSi] included an updated copy of a python based oscilloscope emulator so you can play the demo even if you don’t have the necessary hardware. We wanted to run this the right way, so we powered up our trusty Tektronix 465 and hooked it up to a 1/8″ stereo plug.

Sure enough, the demo played, and it was glorious. We did see a few more retrace lines than the video shows. This could be due to our scope having a higher bandwidth than the 10MHz scope used in the YouTube video. XY demos are one of those rare cases where an analog scope works much better than a low-cost digital scope. Trying the demo on our Rigol ds1052e didn’t yield very good results to say the least. Sometimes good old phosphor just beats an analog to digital converter.