There are plans for open hardware farming equipment that can be brought to third world countries to relieve the beasts of burden and increase the production of fields. Want an open source car? You can 3D print one. Just about anything you can strap a motor to has been replicated in open hardware; all you need to do is buy a motor and bolt it on.

But what about the motors themselves? For his entry to The Hackaday Prize, [Shane] is designing an open source engine. It’s small, it’s a two-stroke, and it’s diesel, but it’s completely open hardware; a great enabling project for all the open source dirt bikes and microcombines.

The design of [Shane]’s engine is based on the Junkers Jumo 205; a weird engine that had opposing pistons in one cylinder. This allows the engine to have variable compression, allowing for a wide variety of fuels to be used. If you have kerosene, that’ll work with this engine. French fry oil will as well. It’s exactly what you need for an engine that could be used for anything. 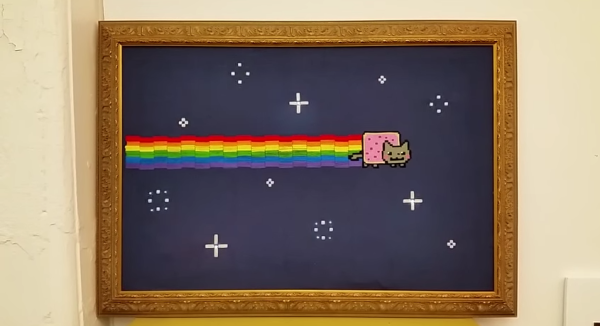 Have you ever come across an Internet meme and just thought to yourself, “I have to bring this into the physical world!” Well [0xb3nn] and [Knit Knit] did. They decided to take the classic nyan cat meme and bring it to life.

The frame is 24″ x 36″. Many hours went into the knitting process, but the result obviously turned out very well. The stars include 24 LED sequins to add a sparkling animation effect. These were sewn onto the back of the work using conductive thread. They are bright enough to shine through to the front where needed. These connect back to an Arduino Pro Mini 5V board.

The Arduino is also connected to a capacitive touch sensor. This allows the user to simply place their hand over the nyan cat image to start the animation. No need for physical buttons or switches to take away from the visual design. An Adafruit AudioFX sound board was used to play back a saved nyan cat theme song over a couple of speakers. The source code for this project is available on github. Be sure to watch the demo video below. END_OF_DOCUMENT_TOKEN_TO_BE_REPLACED

Firewood aficionado and general axing enthusiast [KH4] likes to cut and split his own fire wood. To burn a tree trunk sized piece of wood efficiently, it has to be split into 4 smaller pieces. [KH4] does this with 3 axe swings, the first splitting the main log in 2, then splitting each half in half again. Although he likes swinging the mighty axe, he still would like to increase the efficiency of each swing.

Well he’s done it! This is accomplished by making a Cross Bladed Axe that has an X-shaped head. Each axe swing should split a log into 4 pieces. That results in 66% less swings for the same amount of wood split!

This projected started with two spare axe heads. One was cut in half with an angle grinder. The two axe head halves were then ground down so that they match the contour of the original axe head. Once the fit was good, the welder was broken out and all 3 axe head pieces were combined into one beastly mass.

After the new head was polished and sharpened, it was re-assembled a new hickory handle. We have to say, the end product looks pretty awesome. There’s a video after the break of this axe in action. Check it out!

Have you ever seen how these axe heads used to be manufactured?

END_OF_DOCUMENT_TOKEN_TO_BE_REPLACED 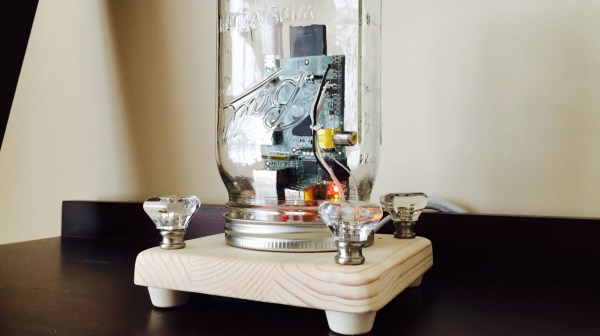 [Matt Reed] used a few off-the-shelf parts and built a Raspberry-Pi based BitTorrent Sync client to help backup files. What makes it stand out is the idea of using a Mason Jar as the enclosure and the nice build finish. Mason Jars have long been used to preserve food. [Matt] wanted to use the Mason Jar to help preserve family memories.

Basically, he just stuffed a Raspberry Pi inside a jar with some LED’s and put BitTorrent Sync on it. He started off with a nice, square piece of wood and mounted the lid on it. Holes were drilled to fix the four LED’s and faux crystal drawer pull knobs. The Pi was connected to power and Ethernet and the LED’s wired up. The software is quite straightforward – just install BitTorrent Sync on the Raspberry Pi. He wrote a Node.js script to constantly check if BitTorrent Sync is transferring any data, and if it is, blink the LED’s so it looks cool. If no data is being transferred, the LED’s just glow solid red. Once it is plugged into power and connected to the internet, any photo or video (or any file for that matter) that is put inside a special folder called “Preserve” on any of his devices, gets sync’ed and copied to the “Raspberry Preserve” – preserved for posterity.

Events include a ‘Zero to Product’ workshop that will take everyone through PCB design, manufacturing techniques, CAM, soldering, testing, and blowing up caps and releasing blue smoke. You can check out the live stream of that here (or below).

Later on this evening, we’ll be having a few short talks from some LA-area hackers, builders and engineers.

Tomorrow is Open Hack Day, where the Hackaday Design Lab will have tables filled with components, dev boards, soldering irons, and enough blinkey stuff to blind someone. Live stream below.

END_OF_DOCUMENT_TOKEN_TO_BE_REPLACED 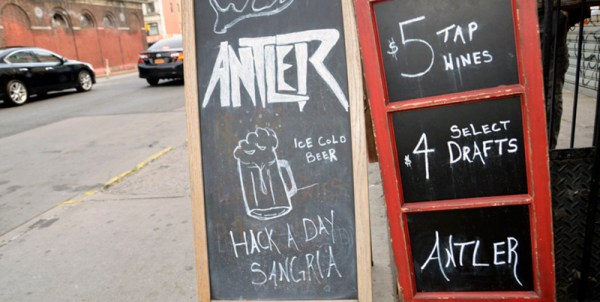 Our New York City trip for the TechCrunch hackathon is just about wrapped up, and this weekend we’re hosting a hardware hackathon at the Hackaday Design Lab in Pasadena, but there’s still one more event from NYC left to cover: our drink-up in the city.

Our drink-up took over about 90% of the Antler Beer and Wine Dispensary, with the usual, not electronically enabled patrons sufficiently annoyed. 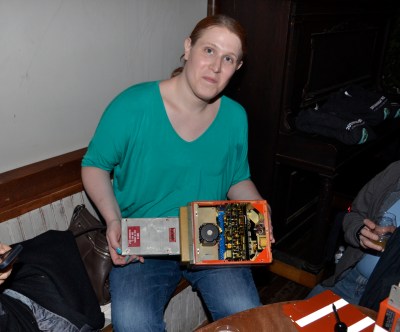 While this meetup was really just a meet-and-greet pregame for the TechCrunch hackathon, and not a proper ‘bring a hack’, that didn’t stop a few people from toting out some very cool hardware. [Katie Fortunato] trucked out a flight data recorder (or an airplane’s black box, painted orange for visibility) that is supposedly from a 747.

This flight data recorder keeps relevant data on a loop of mylar tape. We didn’t crack into that part of the black box, but we did manage to dig into the electronics. Very weird stuff in there; the control electronics have a backplane design, where each card has a connector that’s basically 2 rows of 50 or 75 female pin sockets. These cards aren’t keyed in any way, and they must be placed in the backplane in a certain order. The circuits are extremely simple; just a mix of op-amps, 74- and 54-series logic (no, we can’t figure that one out, either), buffers, and inverters. The latest date code was some time in the early 80s, and all the boards had a conformal coating on them. There’s a weird connector on the outside of the black box [Katie] promises to document on her hackaday.io profile.

Also at the event were a few folks from NYC Resistor, a few people from the IoTGotham meetup, some of the crew from littleBits. Somewhere in the pictures below is a Ms. PacMan/Galaga cabinet. Yes, I tested the bee overflow cheat, it works, but the high score was above 500,000.

END_OF_DOCUMENT_TOKEN_TO_BE_REPLACED

I got into AVR chips because they are easy to program, and that has become more and more true over the years with the ever-falling cost of programmers. But it’s pretty easy to make a mistake when burning the fuses on the chips and if you don’t have a proper programmer (my first programmer was a horrifyingly slow self-built DAPA cable) you’ll have a brick on your hands. This little board may be able to help in that situation. I gave the USB µISP a try this week. The half-stick-of-gum-sized board flashes firmware like a champ and includes a rescue pin for when you have clock source problems.

My full review is below. All technical information for the µISP can be found in the User’s guide. The board itself is now available to purchase in the Hackaday Store.