END_OF_DOCUMENT_TOKEN_TO_BE_REPLACED

News comes from the Raspberry Pi Foundation, of something of a coup for their Compute Module product. Support for it is to be integrated into NEC’s line of commercial displays, and the electronics giant has lined up a list of software partners to provide integrated signage solutions for the platform.

It is interesting to note how NEC have done this, while it’s being spun by the Foundation as a coup for them the compute module sits on a daughter board in a slot on the back of the display rather than on the display PCB itself. They are likely hedging their bets with this move, future daughter boards could be created to provide support for other platforms should the Compute Module board fail to gain traction.

Given that this relates to a high-end commercial product from just one manufacturer, what’s in it for us in the hardware community? After all, it’s not as if you’ll be seeing Compute Module slots in the back of domestic TVs or monitors from NEC or any other manufacturer in the near future. The answer is that such a high-profile customer lends the module platform a commercial credibility that it may not yet have achieved.  Until now, it has found a home mainly in more niche or boutique products, this appearance in something from a global manufacturer takes it to a new level. And as the module finds its way into more devices the chances of them coming within the reach of our community and providing us with opportunities for adapting them for our purposes through the Pi platform become ever greater.

The use of the Compute Module in displays made for public signage is oddly a continuation of an unseen tradition for ARM-based machines from Cambridge. Aside from British schools a significant market for the Acorn Archimedes platform that spawned ARM was the embedded signage market, and even today there are still plenty of signs concealing RiscOS machines out there in the wild.

We covered the launch of the Compute Module in 2014, but it’s fair to say it’s not appeared much since in the world of Raspberry Pi projects from hardware hackers. This is not because it’s not a good platform; more likely that the Raspberry Pi models A, B, and particularly the Zero are so much cheaper when you consider the significant cost of the Compute Module development board. At the Raspberry Pi 4th birthday party earlier this year, while covering the event as your Hackaday scribe but also wearing my metaphorical Pi kit supplier and Pi Jam organizer hats I stood up in the Q&A session and asked the Foundation CEO Phil Colligan to consider a hardware developer program for the platform. Perhaps a cut-down Compute Module developer board would be an asset to such a program, as well as driving more adoption of that particular board. 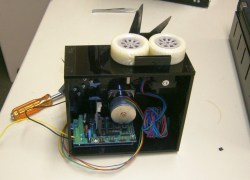