Students with visual impairments can have difficulty with visual and spatial relationships. 3D printers can print almost everything, and with a lot of CAD work, this project in the Hackaday Prize provides these students with physical objects to learn any subject.

[Joan] and [Whosawhatsis] have already written the book on 3D printed science projects and have produced a 3D printed Braille map of a campus, but for this project, they’re making things a little bit simpler. Visually impaired students are tactile learners and the simplest of their 3D printable objects are fixed volume objects. This collection of 3D printable cylinders, cones, prisms, and pyramids give a physical representation of geometric solids. These objects also have another trick up their sleeve: they all contain the same volume. Fill the cylinder up with water, pour that water into a cone, and the student will discover that they all contain the same volume.  That’s useful for the visually impaired, but would also put these printable shapes at home in any elementary or middle school math class.

This project already has a rather large following, with teachers of the visually impaired contributing on a Google Group, and a ton of people downloading the models. [Joan] and [Whosawhatsis] are getting a lot of great feedback and growing the range of contributors, making this the start of an awesome community and a great Hackaday Prize entry.

Back in the old days, the cool kids didn’t have an Apple II or a Trash-80. The cool kids had jobs, and those jobs had Vaxxen all over the place. The usual way of working with a Vax would have been a terminal, a VT220 at least, or in the case of [Sudos]’ experiments with a Raspberry Pi, A DEC VT510, a single session, text only serial terminal.

Usually, when we see a ‘new hardware stuffed into old tech’ project like this, the idea is simply to find a use for the old hardware. That makes sense; a dumb terminal from the late 90s should be a bit rarer than a Raspberry Pi Zero. This is not the case for [Sudos]’s build. He recently came across a few Raspberry Pi Zeros at Microcenter, and looking for a use for them, he decided to turn a serial terminal into a Real Unix System™.

As you would expect from a serial terminal, connecting a Raspberry Pi and putting some awesome character graphics on the screen is as simple as a Max3232 board picked up from eBay, a WiFi dongle, and an Ethernet adapter. Connect the Pi to the terminal with a serial adapter cable, and you’re off to the races.

While the VT510 serial terminal is just about the end of the line as far as dedicated terminals go, there are classier options. The VT100 terminal, older than most of the Hackaday readership, features a port on its gigantic board, meant to connect to whatever weirdness was coming out of Maynard in the late 70s. You can attach a BeagleBone to this connector, making for a very slick stealth mod. 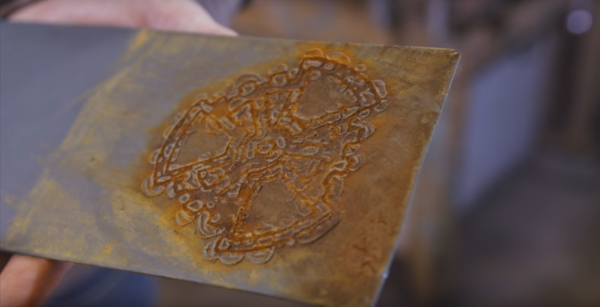 [NightHawkInLight] wants what may be the impossible – a dirt cheap replacement for a laser cutter or a water jet. He’s got this crazy idea about using electrolysis to etch sheet steel parts, but he just can’t get the process to work. Sounds like a job for the Hackaday community.

In theory, electrolytic cutting of metal  is pretty simple to understand. Anyone who lives in the northeast of the USA knows all about how road salt can cut holes in steel given enough time – say, one winter into payments on that new car. Adding a few electrons to the mix can accelerate the process of removing metal, but doing so in a controlled manner seems to be the crux of [NightHawkInLight]’s problem.

In his research into the method, he found a 2010 video by [InterestingProducts] of etching reed valves for DIY pulse jet engines from spring steel that makes it look easy. [NightHawkInLight] deviated from the reed valve process by substituting baking soda for salt to avoid the production of chlorine gas and changed up the masking technique by using different coatings. We applaud the empirical approach and hope he achieves his goal, but we tend to agree with frequent-Hackaday-tipline-project notable [AvE]’s assessment in the YouTube comments – the steel is just too darn thick. Once the etching starts, a third dimension is created at 90° to the surface and is then available to electrolyze, causing the corrosion to extend under the masking.

What does the Hackaday hive mind think? Is there any way to fix this process for thicker steel stock? Narrower traces, perhaps? Somehow modulating the current in the tank? Perhaps using the Hackaday logo would have helped? Chime in down below in the comments, and maybe we can all throw out our laser cutters.

END_OF_DOCUMENT_TOKEN_TO_BE_REPLACED 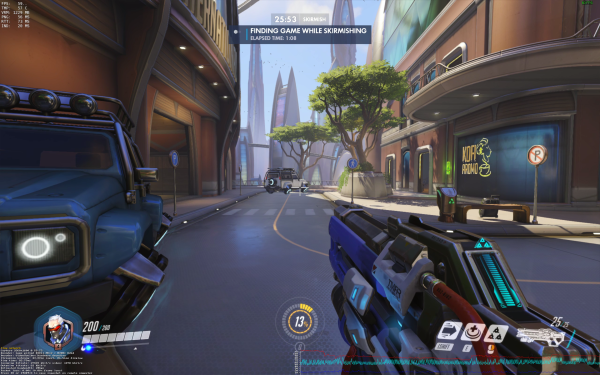 The best gaming platform is a cloud server with a $4,000 dollar graphics card you can rent when you need it.

[Larry] has  done this sort of thing before with Amazon’s EC2, but recently Microsoft has been offering a beta access to some of NVIDIA’s Tesla M60 graphics cards. As long as you have a fairly beefy connection that can support 30 Mbps of streaming data, you can play just about any imaginable game at 60fps on the ultimate settings.

It takes a bit of configuration magic and quite a few different utilities to get it all going, but in the end [Larry] is able to play Overwatch on max settings at a nice 60fps for $1.56 an hour. Considering that just buying the graphics card alone will set you back 2500 hours of play time, for the casual gamer, this is a great deal.

It’s interesting to see computers start to become a rentable resource. People have been attempting streaming computers for a while now, but this one is seriously impressive. With such a powerful graphics card you could use this for anything intensive, need a super high-powered video editing station for a day or two? A CAD station to make anyone jealous? Just pay a few dollars of cloud time and get to it!

It was one of the more interesting consumer tech stories floating around at the turn of the century, a disposable cell phone manufactured using a multi-layer folded paper circuit board with tracks printed in conductive ink. Its feature set was basic even by the standards of the day in that it had no display and its only function was to make calls, but with a target price of only $10 that didn’t matter. It was the brainchild of a prolific New Jersey based inventor, and it was intended to be the first in a series of paper electronic devices using the same technology including phones with built-in credit card payment ability and a basic laptop model.

The idea of a $10 mobile phone does not seem remarkable today, it’s possible that sum might now secure you something with features far in excess of the Nokias and similar that were the order of the day at that time. But when you consider that those Nokias could have prices well into three figures without a contract, and that the new features people considered exciting were things like integrated antennas or swappable coloured plastic covers rather than the multicore processors or high-res cameras we’re used to today, a phone so cheap as to be disposable promised to be very disruptive.

The product’s wonderfully dated website (Wayback Machine link, we’ve skipped the Flash intro for you) has pictures of the device, and the video below the break features shots of it in use as its inventor is interviewed. But by the end of 2002 the Wayback Machine was retrieving 404 errors from the server, and little more was heard of the product. No sign of one ever came our way; did any make it to market, and did you have one?

With the benefit of fifteen years hindsight, why did we not have paper mobile phones as part of the ephemera of the early years of the last decade? It was not a product without promise; a ten-dollar phone might have been a great success. And the description of a cheap laptop that talks to a remote server for its software sounds not unlike today’s Chromebooks.

Some of you might claim the product was vapourware, but given that they demonstrated a working prototype we’d hesitate to go that far. The likelihood is that it did not find the required combination of component price and manufacturing ease to exploit its intended market segment before its competition improved to the point that it could no longer compete. If you have ever taken apart a typical mobile phone of the period you’ll have some idea of why they were not cheap devices, for example the RF filter modules of the day were individually adjusted precision components. And paper-and-ink printed circuit boards are still a technology with a way to go even now, perhaps the idea was simply too far ahead of its time. Meanwhile within a relatively short period of time the price of simple candybar phones dropped to the point at which they would tempt the $10 buyer to spend more for a better product, so the window of opportunity had passed.

END_OF_DOCUMENT_TOKEN_TO_BE_REPLACED

It has been announced that the BBC are to pass their micro:bit educational microcontroller board on to a non-profit-making foundation which will aim to take the project to a global audience. The little ARM-based board with its range of simple on-board peripherals and easy-to-use IDEs was given to every British 13-year-old earlier this year with the aim of introducing them to coding at an early age and recapturing some of the boost that 8-bit BASIC-programmable computers gave the youngsters of the 1980s.

Among the plans for the platform are its localization into European languages, as well as a hardware upgrade and an expansion into the USA and China. Most excitingly from our perspective, the platform will henceforth be open-source, offering the chance of micro:bits finding their way into other projects. To that end thay have placed a reference design in a GitHub repository.

We’ve covered the micro:bit story from the start here at Hackaday, from its launch to the point at which it shipped several months late after a few deadlines had slipped. We reviewed it back in June, and found it a capable enough platform for the job it was designed to do.

This is an interesting step for the little ARM board, and one that should take it from being a slightly odd niche product in one small country to the global mainstream. We can’t help however thinking that price is it’s Achilies’ heel. When it costs somewhere close to £13 in the UK, it starts to look expensive when compared to the far more capable Raspberry Pi Zero at £5 or a Chinese Arduino clone at about £2.50. Here’s hoping that economies of scale will bring it to a lower price point.