Our bodies are not like LEGO blocks or computers because we cannot swap out our parts in the living room while watching television. Organ transplants and cosmetic surgery are currently our options for upgrades, repairs, and augments, but post-transplant therapy can be a lifelong commitment because of rejection. Elective surgery costs more than a NIB Millenium Falcon LEGO set. Laboratories have been improving the processes and associated treatments for decades but experimental labs and even home laboratories are getting in on the action as some creative minds take the stage. These folks aren’t performing surgeries, but they are expanding what is possible to for people to do and learn without a medical license.

One promising gateway to human building blocks is the decellularization and recellularization of organic material. Commercial scaffolds exist but they are expensive, so the average tinkerer isn’t going to be buying a few to play with over a holiday weekend.

Let’s explore what all this means. When something is decellularized, it means that the cells are removed, but the structure holding the cells in place remains. Recellularizing is the process where new cells are grown in that area. Decellularizing is like stripping a Hilton hotel down to the girders. The remaining structures are the ECM or the Extra Cellular Matrix, usually referred to as scaffolding. The structure has a shape but no functionality, like a stripped hotel. The scaffolding can be repopulated with new cells in the same way that our gutted hotel can be rebuilt as a factory, office building, or a hospital. 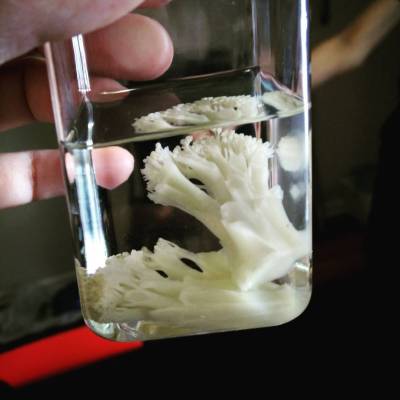 Stripping plant cells from the scaffolding may seem like a mysterious dark art, but it uses easy-to-find ingredients and nothing more exotic than a glass container. Pumps and heaters help, but you can decellularize some fruits and vegetables in your kitchen right after reading this. This process is pretty well understood, and there are already published processes. The first step is to rupture the cell walls by freezing the fruit or vegetable. Slices work well because they expose a lot of surface area and you can plainly see the internal structure of your subject afterward. Once frozen, the slices can be bathed in a solution of SDS and water. SDS is “science talk” for soap. Ordinary dish soap and water may do the trick but commercial SDS is inexpensive and easy to buy from the regular sources. This definitely carries the message of, “Try this at home.” The water will become cloudy as cells leak out, so change it regularly.

Fibrous material, like broccoli, will take longer than soft fruit like strawberries. Wood is also a candidate, but it is actually removing the lignin, and the directions are different. Seeds resist this process because their shells are made to protect against adverse conditions. As ghostly fruit goes, dark seeds on a ghastly white skeleton are pretty trendy.

Decellularizing animal parts is trickier, but it can be more rewarding depending on what you want. A ghost heart on the shelf is probably going to start some conversations. At a minimum, you will find out which of your friends are extremely squeamish. As of writing this, there were no pictures of a decellularized heart under a black light. Just putting that idea out there. 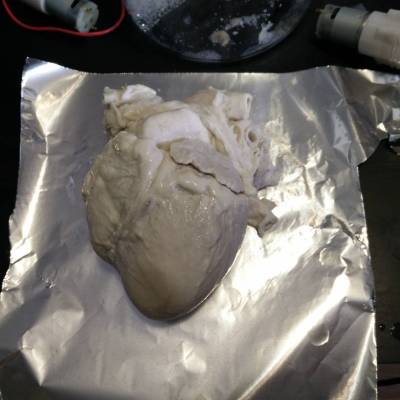 This process is best explained by [The Thought Emporium] who manages to keep an in-depth video under seven minutes without talking over our heads. Maybe it goes without saying, but there are clips of a heart before decellularization so be prepared if that sort of thing isn’t your thing. Also, there is more “science talk” like Retrograde Coronary Profusion, but he explains that nicely.

Lend Me Your Ears

[The Thought Emporium] does a phenomenal job bringing outrageous science to the doorstep of any curious hacker, but if we want to push the limits of what is possible with these scaffolds, we turn to [Andrew Pelling] who has taken the stage at TED talks for his work innovation with recellularizing plant matter. His most notable work is taking apple scaffolds and growing mammalian cells on them in the shape of a human ear. At its most basic, apples were decellularized, carved to look like an ear, and seeded with cells.

Cells grown into a scaffold belong to the receiver, and since they are the host’s cells, they don’t reject like donor material would. This alone makes research important, but making new organs for people on waiting lists is even more vital. At the hacker level, we may see a home-grown Spock ear transplanted in our lifetimes. [Pelling] sees notable similarities between asparagus and a human spinal cord.

Whether decellularization and recellularization will have medical use in the future is up for grabs. What’s clear, though, is that you can play around with this cutting-edge biotech right now, in your own kitchen. Get to it!

40 thoughts on “Decellularization: Apples To Earlobes”