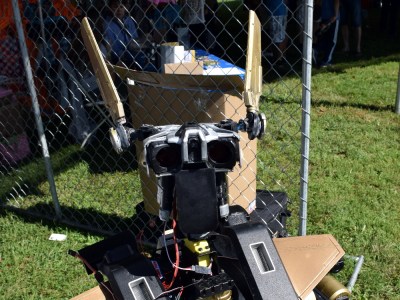 The Hand of Man

“The Hand of Man” isn’t a new creation, its been a staple of Maker Faire for years, and we even covered it back in 2009. But you still can’t begin a rundown of the robotic exhibits at Maker Faire without mentioning the hydraulic claw that casually tosses around cars like they’re toys. Add to that, it’s random kids from the Faire who are pulling the strings of the hydraulic brute and this is one incredible attraction!

Like “The Hand of Man”, TOBOR started out as a disembodied arm that could pick things up. Then somewhere along the line, the folks at Northampton Community College Fab Lab decided to turn it into a mobile dinosaur. Sounds reasonable enough to us. Controlled by an arm-mounted device that looks suspiciously like a hacked Nintendo Power Glove, it’s capable of a wide range of movement and was definitely a big hit with the younger Maker Faire attendees.

We especially liked the interesting juxtaposition of the exposed electronics with the organic looking body and meticulously detailed head. If that made it sound like we have some deep understanding of the artistic intent of this particular piece, we don’t. We’re just fans of visible wires and PCBs around these parts.

You know you’re in good company when some of the thickest crowds at the entire event are clustered around the handful of BattleBots which were on display, fresh from filming new episodes of the Discovery Network’s show. The drivers in attendance were sworn to secrecy about what happened during the recent bouts until the episodes actually air, but given the scorched electronics of at least one robot on the scene, we can make a pretty good guess at who doesn’t win.

But while the crowd around these bonafide TV stars was tight, the attendees grouped around the arena for MassDestruction was nearly impenetrable. These hackers from New England have their own “minor league” of battle robots, ranging from little plastic bots weighing in at 1 pound up to lawnmower sized machines. Some of their more diminutive bots were going head-to-head during scheduled matches throughout the day in their mobile arena, and to say it was a popular attraction would be something of an understatement.

We got a chance to talk to some of the representatives for FESTO, who were showing off their bionic robot kits aimed at the educational market. Allowing high school students to construct various mechanisms inspired by animals, FESTO says these are the first-ever educational bionics kits in Germany and the United States. The kits are a mixture of custom parts and some household components, and their electronics are controlled from the student’s smartphones over Wi-Fi.

Of particular interest was the robotic fish, which uses a sealed “body” and water proof servo to actually swim. The representatives were clear it’s not meant to dive, but if you put it in a pool or tank of water, it will happily swim back and forth on the surface at your command.

If the name FESTO sounds familiar, it’s because their nature-inspired designs are no stranger to the pages of Hackaday. The educational kits are much more simplistic than the work we’ve seen from them in the past, but that’s probably a good thing considering the target age group.

Volt Is Cooler than Most Humans

Being arguably the best looking robot we saw at Maker Faire, it was no surprise to hear that Ray Rumore drew inspiration from iconic robo-actors such as CHAPPiE and Johnny 5 when designing Volt. Intended to be something of a “social” robot, Volt drives around streaming what it sees back to its operator. We’re told during one of its drives at last year’s Maker Faire, it got involved in an impromptu musical number with some human performers. Sounds about as “social” as an individual can get, robot or otherwise.

The Robot Band is, as you might have guessed from the name, a group of humanoid robots that perform songs with their various instruments such as bells and drums. More to the point, they are a mechanized version of the concept of an “earworm”: a song that gets stuck in your head after you hear it. Long after we moved on from where creator Tetsuji Katsuda had his troupe performing inside the New York Hall of Science, we were still humming their clanking melody. Sometimes we even still see them when we close our eyes.

As we all know, robots cannot be stopped by mere mortals such as ourselves, so we have no doubt there’s going to be even more impressive mechanical specimens the next time Maker Faire rolls around. With such an incredible collection of creative individuals, all with different goals and inspirations, how could it be any other way?

In the meantime, to help get you inspired to put something together for next year you should stop by the Hackaday Superconference which is rapidly approaching.

2 thoughts on “Maker Faire NY: Where Robots Come Out To Play”