Digging a little deeper, [Chris] offered to make this card press for [Chris Ramsay], a magician who specializes in cardistry, or the art of illusions with cards. The feel of playing cards is crucial to performing with them, and a card press keeps a deck of cards in shape. Not a commonly available device, [Clickspring Chris] designed one in an elaborate style that brought in elements from [Chris Ramsay]’s logo. 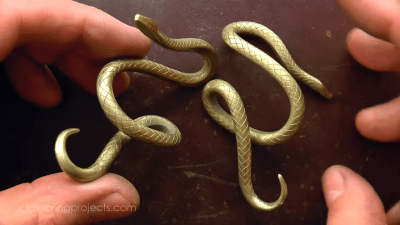 Like all Clickspring videos, this one is a joy to watch, but in a departure, there’s no narration — just 30 minutes of precision machining and metal finishing. [Chris] has gotten into metal engraving in a big way, and used his skills to add details to everything from the stylized acorn at the top to the intricate press plate, all of which was done freehand. And those snakes! Made from brass rod and bent into shape by hand, they wrap around the side supports to form [Chris Ramsay]’s logo. All the brass ended up gold plated, while all the screws ended up with a heat-blued finish. Settle in and enjoy the video below.

It’s been a while since the Clickspring skeleton clock was finished, in which time [Chris] has been working on a reproduction of the Antikythera mechanism. His video output slowed considerably, though, when he made a new finding about the mechanism, an observation worthy of writing up as a scholarly paper. We can’t begrudge him the time needed to pursue that, and we’re glad he found time for this project too.

Thanks to [RandyKC] for the tip.