Yesterday NASA’s Jet Propulsion Laboratory announced that their ventilator design has received Emergency Use Authorization from the US Food and Drug Administration. This paves the way for the design to be manufactured for use in the treatment of COVID-19 patients.

JPL, which is tightly partnered with the California Institute of Technology, designed the ventilator for rapid manufacturing to meet the current need for respiratory tools made scarce by the pandemic. The design process took only 37 days and was submitted for FDA approval around April 23rd. They call it VITAL — Ventilator Intervention Technology Accessible Locally — a nod to NASA’s proclivity for acronyms.

What’s Under the Hood? We Don’t Really Know

There is a website dedicated to the VITAL project but it is very light on hardware details, a topic we know you’re hungry for. I’m left to read between the lines. From the Notification of Licensing Opportunity (PDF) we learn that this is not equivalent to an ICU ventilator, but one to be used leading up to that need:

JPL’s ventilators are targeted to treat the segment of COVID-19 patients who are symptomatic and in need of pre-ICU respiratory ventilation.

Furthermore, the brochure (48 MB PDF) mentions that the system targets patients who are not improving with supplemental oxygen:

Hackaday reached out to JPL and confirmed that VITAL is not a design involving an Ambu bag — an approach I’ve been skeptical about in past writings — instead taking the more common blower-based approach. It is an invasive ventilation design, requiring patients to be intubated and medicated during respiration. It is capable of both reacting to the patient’s own breathing cues in an assisting role, as well as ensuring a minimum breathing cadence (the “back-up rate” setting shown on the control panel). 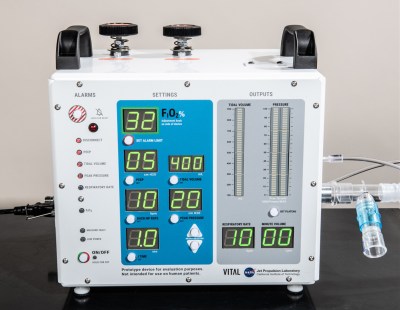 The user interface opts for 7-segment, bar-graph, and discreet LEDs with buttons for user input. This makes operating the device simpler, as features aren’t hidden behind several levels of menus as they might be with a touch-screen interface (hopefully ensuring respiratory professionals can quickly get up to speed with this model). It is designed for 20 days of continuous operation at 100% duty cycle. Interestingly the service life is just 4 months — I’m uncertain if this is an issue with wear and tear on the parts, or due to the difficulty of sanitization regimes for ventilators.

Where I have been most skeptical with all recently announced ventilator designs is the software. However, I know that NASA has a strictly codified and time tested approach to software verification for their flight hardware which in many cases is responsible for keeping humans alive in extreme environments. If this was followed in developing software for VITAL, that alleviates much of my concern.

Can We Build Them?

JPL has done the design work, but they do not have the manufacturing capacity to scale this up in a meaningful way. To that end, the design is currently offered under a free license to applicants selected on a case-by-case basis. Applications are due by May 4th, with selection to be concluded just a few days later on the 7th.

This means you can’t look at the design right now, and it’s not currently open source. There are a couple of ways to look at this tight control. First, this ventilator is designed for use with sedated patients monitored by respiratory professionals, and not something that should be attempted outside of the medical setting — controlling access to the design may be an effort to help ensure these aren’t built and used by untrained persons unnecessarily leading to injury or death. Second, the supply chain is what is currently causing a ventilator shortage so controlling the design may help keep the parts that are in shortest supply going to manufacturing efforts with the best chance of success — if it were released openly, people may begin snapping up as much of the bill of materials as possible causing further shortages.

JPL confirmed to us that this design is not open source but is offered under a world-wide no-fee license administered by CalTech during the COVID-19 crisis. This is vital technology throughout the world and my hope is that it will be shared with any entity making a reasonable request, but only time will tell on how this plays out. I’m told that over 160 applications were received on Thursday alone.

That said, equally important right now is that in a world with a limited supply of available respirators, we should be sharing them. Hand in hand with mitigating the spread and resurgence of COVID-19, humanity must take an active role in procuring, maintaining, and sending these machines to any area in need.

Congratulations to the NASA/JPL team for the approved design, and to the FDA for working through the authorization process quickly. We hope the search for manufacturers will go well and that production rises to meet the need during this crisis.