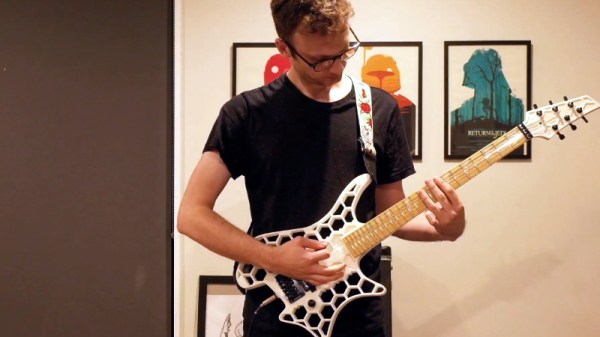 When we think of 3D printed parts for our projects, most of us imagine little bits like brackets and mounting plates. Perhaps the occasional printed project enclosure. But if you’ve got a big custom printer as [Joshendy] does, plus plenty of time, it opens up a whole new world of large scale projects. Take for example the gorgeous RGB LED guitar body he recently completed.

Despite the considerable 300 x 300 mm build area of his custom 3D printer, [Joshendy] still had to design the guitar body in sections that could be bolted together after being printed in ABS. It took around 60 hours to run off all the parts, with the large central section taking the longest to print at 28 hours. With the generous application of heat-set inserts, the assembled guitar should be plenty strong.

While the skeletal plastic body of the guitar is certainly visually interesting in itself, it only makes up for half of the final look. Inside the central cavity, [Joshendy] has embedded two strips of RGB LEDs, a 128×64 OLED screen, and a custom PCB that plays host to a STM32L4 microcontroller the appropriate voltage regulators necessary to run it all on a battery pack.

The board taps into the audio being produced by the guitar and uses a fast Fourier transform (FFT) to get the LEDs reacting to the beat. As demonstrated in the video after the break, you can use the screen to navigate through the different lighting modes in real-time right on the instrument itself.

We covered the equally impressive large-format 3D printer that [Joshendy] used to produce this guitar earlier in the month, and it’s quite exciting to see the sort of things he’s printing on it already. This project has already set the bar very high, and we can’t wait to see what he comes up with next.

END_OF_DOCUMENT_TOKEN_TO_BE_REPLACED 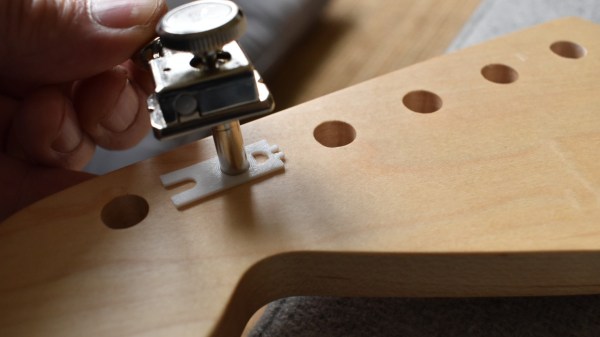 If you like building or upgrading guitars, you may have already learned the valuable lesson that the devil absolutely is in the detail when it comes to to replacement parts. Maybe you became aware that there are two types of Telecaster bridges right after you drilled the holes through the body and noticed things just didn’t quite fit. Or maybe you liked the looks of those vintage locking tuners and the vibe you associate with them, only to realize later that the “vintage” part also refers to the headstock, and the holes in your modern one are too big.

The latter case recently happened to [Michael Könings], so he did what everyone with a 3D printer would: make an adapter. Sure, you can also buy them, but where’s the fun in that? Plus, the solution is as simple as it sounds. [Michael] modelled an adaptor to bridge the gap between the headstock holes and the tuner shaft, but unlike the commercial counterpart that are mounted only on one side, his fills up the entire hole and fits the entire construct tightly together. For even more overall stability, he added an interlocking mechanism on the back side that keeps all the adaptors in line, and also allows for some possible distance differences.

[Michael] initially considered using wood filament for cosmetic reasons, but due to lack of the material went with simple white PLA instead. In the end, it doesn’t matter too much, as most of it hides under the new tuners’ metal covers anyway — and the small parts that are visible will serve as a great reminder of this lesson in guitar variety. Speaking of 3D printing and guitar variety, now that we reached the headstock, and have seen bodies for a while already (including bass), only 3D-printed guitar necks are missing. Well, we’ve had them on violins though, even with 6 strings, but they also don’t have to deal with frets and have a bit less tension going on. 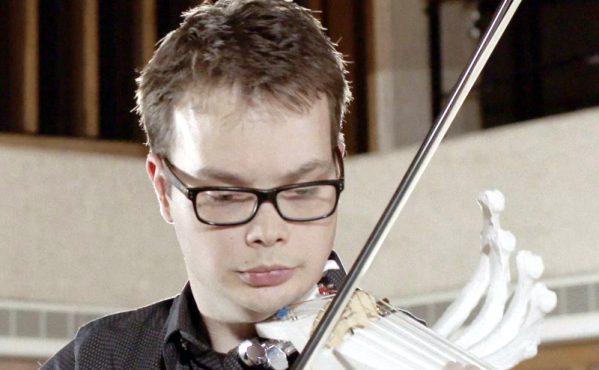 [Sean Riley] is a violinist who had a problem. He wanted to play one particular piece, but he couldn’t. It wasn’t that he lacked the skill — he a doctoral student at the University of Texas and has two degrees in violin performance from The Julliard School. The problem was that “The Dharma at Big Sur” by [John Adams] is made for an instrument with six strings, while most violins only have four. So he did what any of us would do. He stopped by the local hackerspace and fabricated one. You can hear (and see) [Sean] performing with the instrument in the video, below.

The University of Texas operates “The Foundry” which is a hackerspace with all the usual items: laser cutters, 3D printers, and the like. It is open to all their students and staff. [Sean] needed some help with the engineering, and was lucky to find a mechanical engineering senior, [Daniel Goodwin], working at The Foundry.

END_OF_DOCUMENT_TOKEN_TO_BE_REPLACED We just stumbled upon a great repository of all musical things that are 3D printed. It’s a wiki dedicated to sharing and recording these 3D printed instruments to help encourage further ideas and projects.

The people maintaining the site find different projects and share them, adding descriptions which would go great into a database search. They explain the type of instrument, it’s history, a picture or video of it and the method of manufacture used to create, whether it be traditional 3D printing, laser cutting, or another process.

Some of our favorites include the 3D printed guitar bodies, the strange looking multi-horn trumpet (that’s the weird one, bottom right) by the MIT Media Lab, and of course the humongous bass recorder (top right).

Stick around after the break for a few videos of these unconventional, unorthodox instruments!