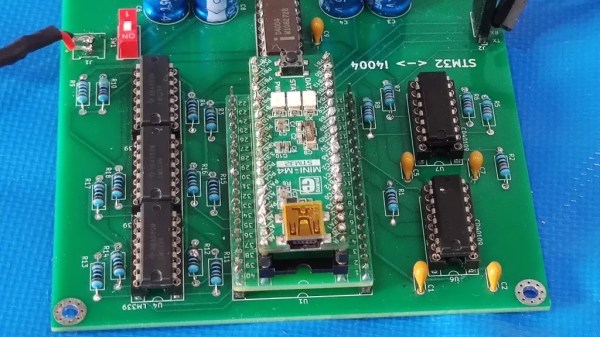 These days we are blessed with multicore 64-bit monster CPUs that can calculate an entire moon mission’s worth of instructions in the blink of an eye. Once upon a time, though, the state of the art was much less capable; Intel’s first microprocessor, the 4004, was built on a humble 4-bit architecture with limited instructions. [Mark] decided calculating pi on this platform would be a good challenge.

It’s not the easiest thing to do; a 4-bit processor can’t easily store long numbers, and the 4004 doesn’t have any native floating point capability either. AND and XOR aren’t available, either, and there’s only 10,240 bits of RAM to play with. These limitations guided [Mark’s] choice of algorithm for calculating the only truly round number. END_OF_DOCUMENT_TOKEN_TO_BE_REPLACED

If you maintain an interest in vintage computers, you may well know something of the early history of the microprocessor, how Intel’s 4-bit 4004, intended for a desktop calculator, was the first to be developed, and the follow-up 8008 was the first 8-bit device. We tend to like simple stories when it comes to history, and inventions like this are always conveniently packaged for posterity as one-off events.

In fact the story of the development of the first microprocessors is a much more convoluted one than it might appear, with several different companies concurrently at the forefront of developments. A fascinating recent IEEE Spectrum piece from [Ken Shirriff] investigates this period in microprocessor design, and presents the surprising conclusion that Texas Instruments may deserve the crown of having created the first 8-bit device, dislodging the 8008 from its pedestal. END_OF_DOCUMENT_TOKEN_TO_BE_REPLACED

Developing for extremely old computers is a chore; not only are you limited by assembly or pure machine language, there’s also the issue of burning ROMs to actually run your programs. [Frank Buss] came up with a neat solution to developing for the venerable 4004 CPU – build a ROM emulator using a modern microcontroller.

The build started off with a ZIF socket for the 4004 CPU and a 256 byte 4001 ROM chip emulated on a PIC micro. The CPU looked a little lonely sitting in the ZIF socket all by its lonesome, so [Frank] updated his board to allow a 4002 RAM chip to be plugged in as well.

Because [Frank] chose a 4004 for his entry for this season’s retrochallenge competition, we need to point we’re offering a prize for loading our retro site with this CPU. Yes, it’s most likely impossible but nothing worth doing is easy.

You can check out a video [Frank]’s ROM emulator after the break.

END_OF_DOCUMENT_TOKEN_TO_BE_REPLACED

The silicon wizards at Flylogic have certainly posted an interesting chip this time around. The Intel 4004 was the first widely used microprocessor. The logic gates are much larger than you’d find in modern chips. The unique feature is that each gate is designed to make the most efficient use of the silicon instead of the standardized shapes you find now. They’ve uploaded a full image of the chip.

For an introduction to silicon hacking, we reccomend [bunnie]’s talk from Toorcon and [Karsten]’s talk from 24C3. You can find many more posts on the topic in our silicon tag.