A timepiece is rather a rite of passage in the world of hardware hacking, and we never cease to be enthralled by the creativity of our community in coming up with new ones.

Today’s example comes from [Joshua Snyder], who has made a pocket watch. Not just any pocket watch, he’s taken the shell of a clockwork watch and inserted a ring of Neopixels, which he drives  from an ESP8266 module. Power comes from a small LiPo battery, and he’s cleverly engineered a small push-button switch so that it can be actuated by the knob from the original watch. Different colour LEDs traverse the ring to simulate the hands of a traditional timepiece, and the whole nestles behind the perforated cover of the watch shell for something of a steampunk feel.

He admits the battery life is not very good at the moment, probably because for now the WiFi is always enabled so he can reach its web interface for debugging. Sadly he appears to have not yet posted the software, but he does tell us it uses NTP to update its time, and that it supports over-the-air updating for new versions. He suggests a future version might dispense with the ESP and use an ATtiny or similar with a real-time clock giving better battery life.

We’ve covered a lot of LED timepieces over the years, including quite a few watches. Only a small selection are this PIC LED ring in a pocket watch case, another LED ring this time powered by an ATMega645, and this very stylish OLED wristwatch.

How do you measure the value of an unknown inductor? If you have an LCR bridge or meter, you are probably going to use that. If not, there are many different techniques you can use. All of them rely on the same thing my Algebra teacher Mr. Harder used to say back in the 1970’s: you have to use what you know to get what you don’t know.

END_OF_DOCUMENT_TOKEN_TO_BE_REPLACED 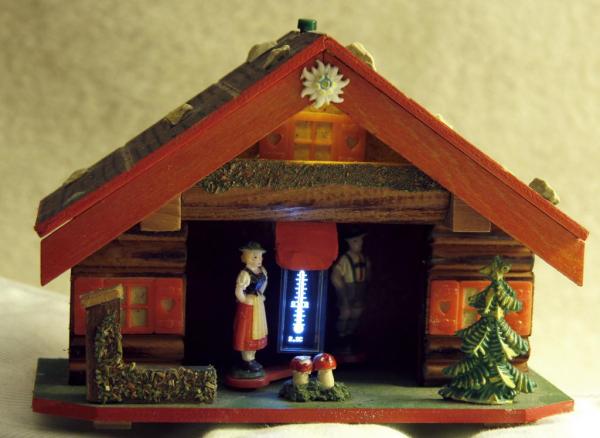 Before the information age, it wasn’t quite as easy to glean information about the weather. Sure, there were thermometers and barometers and rhymes about the sky, but if you lived in or near Germany back then you might have also had access to something called a “weather house” which could help predict rain. [Moritz] aka [Thinksilicon] found one of these antequated devices laying around, and went about modernizing it. (Google Translate from German)

A traditional weather house is essentially a hygrometer housed in an intricate piece of artwork. Two figures, typically a man and woman, are balanced on a platform that is suspended in the middle by a small section of horsehair. When the humidity is low, the hair tightens up and turns the platform one way, and when humidity is high — suggesting rain is coming — it turns the other way. When the man comes out of the house, it predicts rainfall.

To get the weather house upgraded, [Moritz] outfitted the front with an OLED display which replaced the traditional thermometer. Instead of using horsehair to spin the figures he installed a small servo on the platform. The entire house is controlled by an ESP8266 which pulls data from the Open Weather API and spins the figures based on the information it receives.

Much like unique clocks, we enjoy interesting weather indicating/forecasting builds. This one’s right up there with using squirrels to predict the weather, or having a small weather-recreation right on your bookshelf.

Capcom’s CPS2 – or CP System II – was the early to mid-90s arcade hardware famous for Super Street Fighter II, Alien vs. Predator, and a few of the Marvel and Capcom crossover arcade games. As you would expect, these boards have become collectors items. Unfortunately for future generations, Capcom took some short-sighted security measures to prevent copying the games, and the boards have been failing over the last two decades.

After months of work, [ArcadeHacker] and several other arcade enthusiasts have reverse engineered the security protocol and devised a method of de-suiciding these arcade boards, allowing for the preservation of this hardware and these games. The code that does the trick is up on GitHub.

Last year, [ArcadeHacker] reverse engineered the on-chip security for Capcom’s Kabuki processor, the CPU used in some of Capcom’s earlier arcade boards. It used a similar protection scheme. In the Kabuki hardware, the on-chip ROM was interspersed with a few XOR gates on the processor’s bus. With a security key kept in battery-backed memory, this was enough to keep the code for the game secret, albeit at the cost of preventing historical preservation.

Over the next few weeks, [ArcadeHacker] will post more detailed information about the copy protection scheme of the CPS2 board, but the proof-of-concept works right now. It’s now possible to revive a CPS2 board that has killed itself due to a dead battery, and the hardware is as simple as an Arduino and a few test clips. You can check out a video of the exploit in action below.

END_OF_DOCUMENT_TOKEN_TO_BE_REPLACED

If you maintain an interest in vintage computers, you may well know something of the early history of the microprocessor, how Intel’s 4-bit 4004, intended for a desktop calculator, was the first to be developed, and the follow-up 8008 was the first 8-bit device. We tend to like simple stories when it comes to history, and inventions like this are always conveniently packaged for posterity as one-off events.

In fact the story of the development of the first microprocessors is a much more convoluted one than it might appear, with several different companies concurrently at the forefront of developments. A fascinating recent IEEE Spectrum piece from [Ken Shirriff] investigates this period in microprocessor design, and presents the surprising conclusion that Texas Instruments may deserve the crown of having created the first 8-bit device, dislodging the 8008 from its pedestal. END_OF_DOCUMENT_TOKEN_TO_BE_REPLACED

Last week, we had a look at a carbon-infused PETG filament. This week, I’d like to show you two composites based on a more common thermoplastic in 3D printing: ABS. Among a whole lot of other engineering plastics, the french company Nanovia manufactures Kevlar-like aramid-fiber-infused and carbon-fiber-infused ABS 3D printing filaments. These materials promise tougher parts with less warping while being just as easy to print as regular ABS. Let’s check them out!