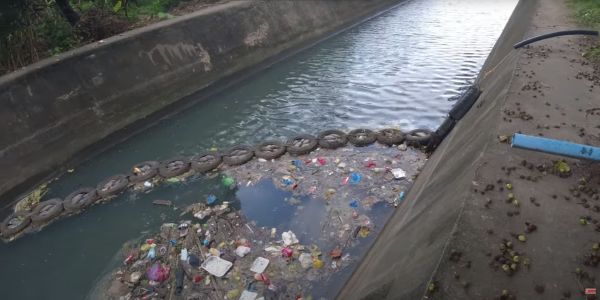 [Rich] over at Tropical Ocean Cleanup on YouTube has been working hard to prevent plastic waste from getting into the waters around the Philippines. Even as a mostly one-man crew, he’s collecting large sums of plastic waste using a boom system which he fittingly made out of waste: old tires and empty plastic bottles. This Kaboom system is a low-cost method of capturing any waste so that it can be collected and properly disposed of. In addition [Rich] also installs containers where locals can dispose of their plastic trash.

The Kaboom system is detailed by [Rich] in this video (also linked after the break). As a shoestring budget project, it relies heavily on donations and local support to install more of these booms. It is however a highly effective way to prevent such common plastic waste from making it into the oceans in the first place. Having these booms made out of waste items that are commonly found where humans roam should make this a snap.

Ideally, local governments would be installing such capturing systems and easy waste disposal options, but sometimes it seems grassroots efforts like these are what will bring the fastest change.

Curious about what to do with all that plastic waste once you collect and identify it? How about making some plastic bricks?

END_OF_DOCUMENT_TOKEN_TO_BE_REPLACED 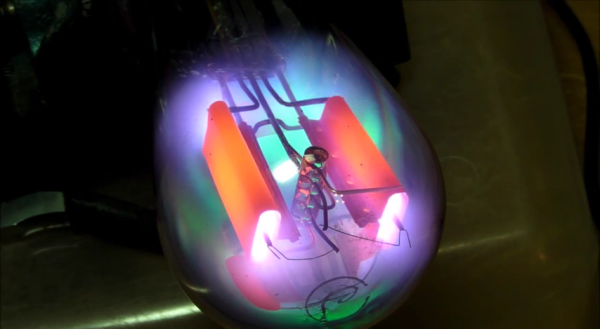 [Eric] has an Atwater Kent 55C AM radio from the early 1900’s. He’s been trying to restore the radio to proper working condition. His most recent pain has been with the rectifier tube. The tube is supposed to have a complete vacuum inside, but that’s not the case here. When the tube is powered up, it glows a beautiful violet color. It may look pretty, but that’s indicative that gas has leaked into the tube. It needed to be replaced.

[Eric] had a tube that would serve as a good replacement, but it’s plug didn’t fit the socket properly. He was going to have to use this old broken tube to make an adapter. Rather than just tearing the old tube apart, he decided to have some fun with it first. He hooked it up to a variac, an ammeter, and a volt meter. Then he slowly increased the voltage to see what would happen. The result was visually stunning.

The tube starts out with the same violet/blue glowing [Eric] experienced previously. As the voltage increases, it gets more and more intense. Eventually we start to see some green colors mixing in with the violets. [Eric’s] reaction to this unexpected result is priceless. As the tube gets increasingly hot, the anode starts glowing an orange-red color. Finally, the filament starts to crackle like a sparkler before the tube just gives up and completely fails.

After the light show, [Eric] moves on to replacing the tube. He begins by tapping on the old tube’s socket with the end of a screwdriver. After much tapping, the glass starts to come lose from the socket. After a bit of wiggling and twisting the tube finally came free from the socket. [Eric] luckily had an unused octal socket that fit perfectly inside of the old socket. All he needed to do to build his adapter was to connect the four pins from the old adapter to the proper pins on the octal socket. Piece of cake.

…Or so [Eric] thought. After testing some new tubes with a tube tester, he realized he had soldered all four pins incorrectly. On top of that, he had super glued the adapter together. He eventually got the two pieces apart. This time he removed all of the unused pins from the octal socket so he wouldn’t get it wrong. Another run on the tube tester confirmed that everything looked good. After plugging the tube into the radio, it worked just as expected

If you need fabrication rather than repair, we’ve got you covered there as well. Check out [Charles Alexanian’s] process for making new vacuum tubes in his garage. Now if you just have too darn many of them around, you can always decorate your pad with ’em.