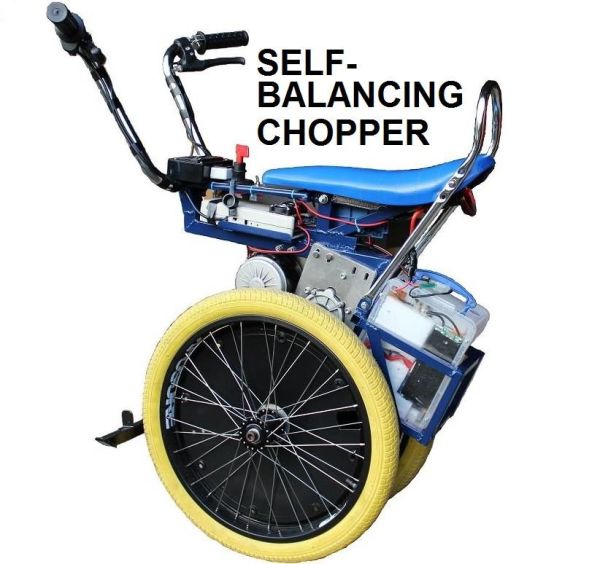 [XenonJohn] is not a newcomer to the world of self balancing vehicles. He was part of the Medicycle team and a semifinalist for The Hackaday Prize. Working on the Medicycle had exposed some opportunities for improvement of the design, the most significant being the single wide wheel supporting the vehicle and rider. The unicycle design was more difficult to learn to ride than that of a two-wheeled nature. [XenonJohn] wanted to make an improved self balancer and this new one will have two wheels that are independently controlled.

Although the finished product looks like it started with a bike frame, the self-balancer’s frame is actually completely custom. The handlebars and banana seat were purchased new as aftermarket parts for old-style bicycles. Powering the two wheels is a pair of 24v brushed motors, conveniently each one came with a 6:1 reduction gearbox pre-installed. The wheels are a complete compilation of parts not intended to go together. The BMX bike rims were laced to mountain bike front hubs. The hubs have provisions for a disk brake but [XenonJohn] mounted a large toothed pulley there instead. A belt then connects the drive motor gearboxes to the pulleys completing the drive train.

The LiFePO4 battery kit was purchased off eBay and puts out 24v and 15AH using eight cells. These batteries alone were a hefty percentage of the projects cost, costing nearly $300. Controlling the vehicle is an Arduino Mega that makes use of the FreeSix IMU library. The Mega receives inputs via I2C from a Sparkfun SEN-10121 board that contains both accelerometers and gyroscopes along with turn switches connected to the ‘brake’ levers on the handlebars. The Arduino then sends commands to the 25 amp Sabertooth motor controllers to keep you balanced as you buzz around town.

END_OF_DOCUMENT_TOKEN_TO_BE_REPLACED 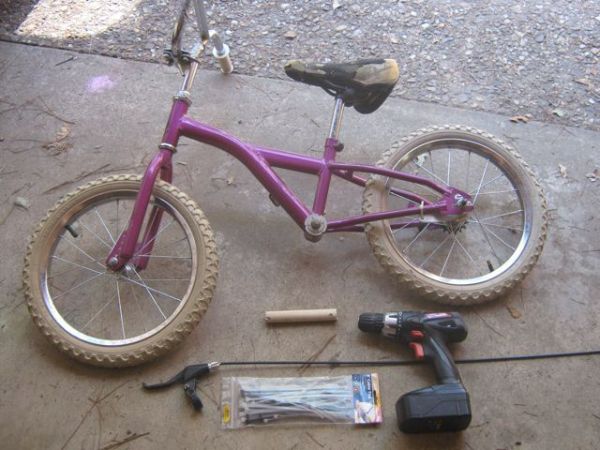 Necessity may be the mother of invention, but limited resources give birth to some of the best hacks. [joejoeboom’s] 5-minute electric bike conversion probably can’t drive you into the next town, but it can scoot you around your neighborhood.

[jojoeboom] found a cordless drill at a local hardware store for $15, which he simply zip-tied to the bicycle’s frame. He positioned the drill so the chuck pressed firmly against the side of the bicycle’s rear wheel, creating a simple friction drive system. To create a throttle, [joejoeboom] strapped a spare hand brake to the handlebar and wrapped the brake’s cable around the drill’s trigger. Several carefully placed zip ties hold everything in place and allow the cable to tug at the trigger when the hand brake is squeezed.

Watch the bike poking around in a video below, and for some extreme contrast check out the 102-mph bicycle build from earlier this summer.

END_OF_DOCUMENT_TOKEN_TO_BE_REPLACED We don’t mind it that there’s no chain connected to these pedals. At least there’s still somewhere to put your feet and our legs are too long to comfortably pedal this size of bike anyway. As you can tell, the added hardware takes care of locomotion using an electric motor.

The first step in this project was to find a steel bike frame to make welding a bit easier than it would be for aluminum. From there the paint was sanded at the attachment points and mounting brackets were fabricated from some angle iron. The rear mount houses a 500W 30A AC motor which uses a chain to drive the rear wheel. A specialty hub was found which allows the added sprocket to be installed on the left side of the rear wheel. Some threading issues prompted [Michael Monaghan] to come up with a method of adding a slot to lock the part in place.

Near the front fork the second mounting bracket holds the batteries; a pair of sealed lead-acid units. The speed control mounts on the top where the rider has easy access to it. The finished bike can get up to thirty miles per hour with a range of up to twenty miles between charges.

If you want your own electric bike on the cheap you can try building one from a salvaged washing machine motor.

[Justin Lemire-Elmore] spent one month riding his electric bike across Canada last summer. He made the journey from Vancouver to Halifax in 30 days using a mere $10 worth of electricity to recharge his bike. He put together a rather bizarre looking semi-recumbent bicycle to hold all of his gear. The motor controller, charge controller, battery packs, and lighting system were all his own design. He has a captivating 2 hour presentation embedded below in which he describes all the problems he had with his equipment during the trip as well as all the great experiences the journey offered. END_OF_DOCUMENT_TOKEN_TO_BE_REPLACED

[garygadget15] in the UK has an interesting youtube page showing an electric bicycle. On his page titled, saving money the “green way” he has replaced his commuter car with one of these electric bikes. He then videos the commute with both to compare the results. The DIY electric bicycle kit he uses is made by Cyclone comes in multiple wattage’s ranging from 180 watts to 1500 watts where they do a great job of showing the conversion steps. They’ve got enough detail that you could fab your own from salvaged parts if you felt like it.