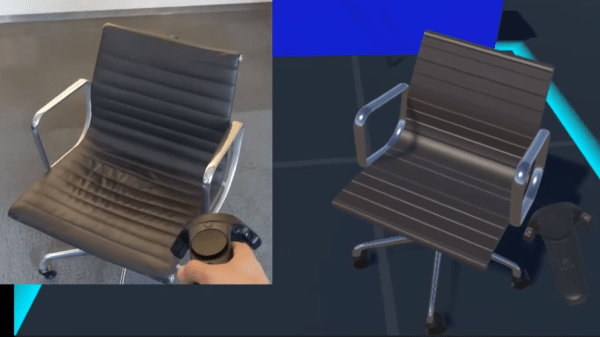 END_OF_DOCUMENT_TOKEN_TO_BE_REPLACED

Our friend [James Bruton] from XRobots has engaged in another bit of mixed-reality magic by showing how one can seamlessly step from the virtual world into the real world, and back again. Begone, green screens and cumbersome lighting!

Now, most of what you’re seeing is really happening in post-production — for now — but the test footage is the precursor for a more integrated system down the road. As it works now, a GoPro is attached to the front of a HTC Vive headset, allowing [Bruton] to record in both realities at the same time. In the VR test area he has set up is a portal to a virtual green room — only a little smaller than a wardrobe — allowing him to superimpose the GoPro footage over everything he looks at through that doorway, as well as everything surrounding him when he steps through. Unfortunately, [Bruton] is not able to see where he’s going if he is to wear the headset, so he’s forced to hold it in one hand and move about the mixed-reality space. Again, this is temporary.

In action — well, it gets a little surreal when he starts tossing digital blocks through the gateway ‘into’ the real world.

END_OF_DOCUMENT_TOKEN_TO_BE_REPLACED [Bjørn] combined some aging electronics he had around the house to create this Android media center. The enclosure is an FM-radio, but since he only listens to online media it wasn’t of much use to him. After sizing it up he realized it was a perfect candidate to receive his old HTC Hero Android phone.

The upper portion of the stock radio used to host controls for tuning the FM dial, adjusting volume, and switching the unit on and off. He cracked open the case, ditching the radio receiver and patching in to the amplifier. The volume knob was moved to the right side of the case, and a hole cut to receive the phone. Audio is pulled from the phone with the jack sticking out the left side. We’d love to see a future improvement using a right-angle jack (kind of like this charging hack) or patched directly into the phone’s circuit board. This way everything would fit inside the box.

Now he can listen to Internet radio, or stream some video like in the clip after the break.

END_OF_DOCUMENT_TOKEN_TO_BE_REPLACED While many mobile phone manufacturers are moving towards the micro-USB interface as a standard, others such as Apple and HTC are still bucking the trend. Part of [arto’s] job includes repairing mobile phones, and last month he found himself faced with a pair of broken HTC handsets that needed their charging ports replaced.

Replacements for HTC’s proprietary connectors are apparently quite hard to find, and [arto] says he had to source them from an HTC repair center. With the proper parts in hand, he could finally get down to work.

The HTC Hermes handset he repaired was a breeze, as it had plenty of space available around the charging port. He said that this allowed him to replace the jack pretty easily, but the HTC Touch Dual was a mess in comparison. He started by removing the old adapter, which was done by cutting it out bit by bit. He says that he did it this way rather than desoldering, due to its proximity to other heat-sensitive components. After some careful soldering under a microscope, everything was back in working order.

While his repairs are not necessarily the things that hacks are made of, the information is still quite helpful. Broken charging ports are extremely common among smart phones, and with plenty of these older models still floating around, his pointers just might help someone save a few bucks on a replacement phone. This is a custom back plate with induction charging circuitry that [Derek Hughes] build for his HTC HD2 cellphone. When we checked in with him last week he showed us how to add an inductive charger without voiding the warranty but it wasn’t very pretty because the stock back plate blocked the inductive field and couldn’t be used. The solution he came up with will work with any device if you want to put some time into the build.

He took two different aftermarket cases; one fits his cellphone and the other is a BlackBerry case meant for housing a credit card. After cutting a hole in the back of the cellphone case he epoxied the credit card holder in place, smoothed the seam with Bondo, and repainted. Not only does the charger fit in the credit card case, but there’s still room for a credit card. [Derek] also measured the magnetic fields around the circuitry and found they will not damage the magnetic strip on that American Express Black you’ve been keeping on you. In the video after the break he mentions the last step in finishing this case will be to locate a 90-degree USB plug as the current connector is a bit of an eyesore. 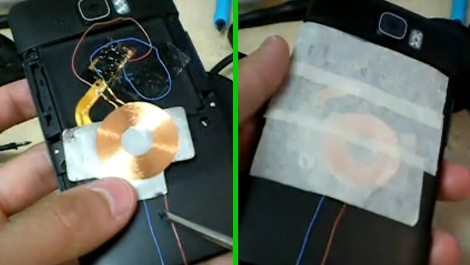 [Derek Hughes] wanted to use inductive charging on his cellphone without voiding the warranty. He picked up a Pixi charging backplate meant for a Palm Pre and scavenged the coil and regulator circuitry from it. To make the electrical connection with his HTC HD2 he removed the mini-USB plug from a charging cable and connected it with 30 gauge wire. The whole package will fit beneath the back plate for use with a Touchstone charger (as we’ve seen with the HTC Evo) but there was one problem. The metal backplate from the HD2 interferes with the inductive charging. For now he’s using tape to hold everything together while searching for a plastic case replacement.

He walks you through the hack in the video after the break. We’re usually not worried about voiding warranties, but a phone like this takes a lot of abuse and having warranty protection or even a service agreement isn’t a bad idea. END_OF_DOCUMENT_TOKEN_TO_BE_REPLACED