A little while ago, we complained that there aren’t many projects using the Microview, a very cool Arduino and OLED thing that might be just too big for a ring. [Johannes] answered the call with a slot car track timer. He’s using an infrared distance sensor to count off lap times for his slot car track and a mini thermal printer to print out the times. Video right here.

Too many cables in your freshman college dorm room? Here’s the solution.

Our Internet travels frequently take us to strange auctions (we’re still looking for a US Mail truck, btw), but this one takes the cake. 24kt gold plates that were flown in space for five and a half years weighing 6,015.5 grams (212.191 oz). At the current price of $1277.06/oz, this auction should go for $270,980 USD. I’m 99% sure this was part of the Long Duration Exposure Facility, but I have no clue why this much gold was flown. Surely they could have done the same amount of science with only a hundred thousand dollars worth of gold, right?

Speaking of dildonics, the guy who coined that term will be giving one of the keynotes at the Vintage Computer Festival East this year. Yes, we’ll be there in full force. 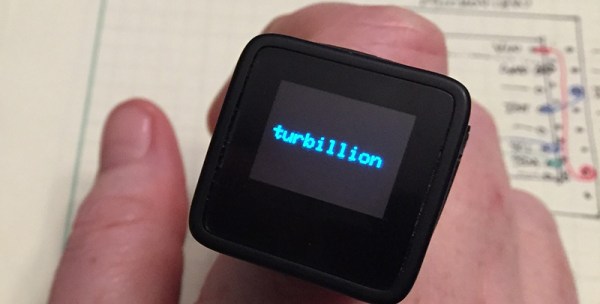 Despite the MicroView shipping a ton of units, we haven’t seen many projects using this tiny Arduino and OLED display in a project. Never fear, because embedded systems engineer, podcaster, and Hackaday Prize judge [Elecia White] is here with a wearable build for this very small, very cool device.

The size and shape of the MicroView just cried out to be made into a ring, and for that, [Elicia] is using air-drying bendy polymer clay. To attach the clay to the MicroView, [Elecia] put some female headers in a breadboard, and molded the clay over them into a ring shape. It works, and although [Elecia] didn’t do anything too tricky with the headers and clay, there are some interesting things you could do running wires through the clay.

What does this ring do? It’s a Magic 8 Ball, a game of Pong controlled by an accelerometer, a word-of-the-day thing (with definitions), all stuffed into a silicon, OLED, and clay knuckle. Video below.

If you’re wondering, Turbillion (n). A whirl; a vortex.

END_OF_DOCUMENT_TOKEN_TO_BE_REPLACED

Remember those ‘cocktail’ arcade cabinets? The Ikea Lack table has existed for years, so why not make one into an arcade table? Raspberry Pi with RetroPie as the brains,  and an ancient 4:3 monitor as the display.

Old Unixes! Running on PDPs, Novas, and IBMs! Thanks to Simh, you can emulate these old machines. [Matt] put up a guide to getting Simh running on a Pi that includes running Unix V5 on an emulated PDP-11.

Remember last week when Sparkfun said they shipped 2000 Microviews without a bootloader? Make interviewed [Marcus Schappi], the guy behind the MicroView. There’s also a tutorial on how to fix the issue.

Remember the [Lord Vetinari] clock from way back when? It’s a clock that ticks 86400 times a day, but the interval between each second is just slightly random and enough to drive people insane. Here’s a kit on Tindie that makes it pretty easy to build a Ventinari clock, or a variety of other clocks that are sufficiently weird. There’s also a martian clock that’s 39 minutes and 36 seconds longer than normal, perfect for the folks at JPL.