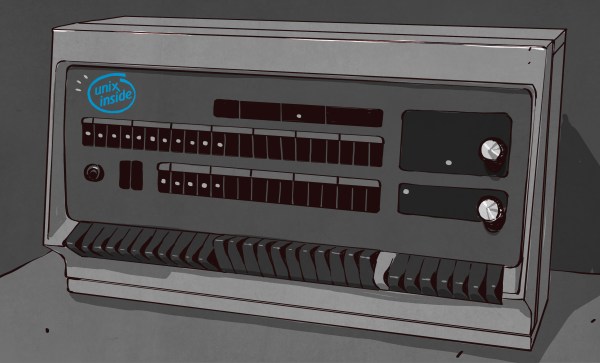 Last week the computing world celebrated an important anniversary: the UNIX operating system turned 50 years old. What was originally developed in 1969 as a lighter weight timesharing system for a DEC minicomputer at Bell Labs has exerted a huge influence over every place that we encounter computing, from our personal and embedded devices to the unseen servers in the cloud. But in a story that has seen countless twists and turns over those five decades just what is UNIX these days?

The official answer to that question is simple. UNIX® is any operating system descended from that original Bell Labs software developed by Thompson, Ritchie et al in 1969 and bearing a licence from Bell Labs or its successor organisations in ownership of the UNIX® name. Thus, for example, HP-UX as shipped on Hewlett Packard’s enterprise machinery is one of several commercially available UNIXes, while the Ubuntu Linux distribution on which this is being written is not.

The real answer is considerably less clear, and depends upon how much you view UNIX as an ecosystem and how much instead depends upon heritage or specification compliance, and even the user experience. Names such as GNU, Linux, BSD, and MINIX enter the fray, and you could be forgiven for asking: would the real UNIX please stand up?

END_OF_DOCUMENT_TOKEN_TO_BE_REPLACED

Are you reading this on a machine running a GNU/Linux distribution? A Windows machine? Or perhaps an Apple OS? It doesn’t really matter, because your computer is probably running MINIX anyway.

There once was a time when microprocessors were relatively straightforward devices, capable of being understood more or less in their entirety by a single engineer without especially God-like skills. They had buses upon which hung peripherals, and for code to run on them, one of those peripherals had better supply it.

A modern high-end processor is a complex multicore marvel of technological achievement, so labyrinthine in fact that unlike those simple devices of old it may need to contain a dedicated extra core whose only job is to manage the rest of the onboard functions. Intel processors have had one for years, it’s called the Management Engine, or ME, and it has its own firmware baked into the chip. It is this firmware, that according to a discovery by [Ronald Minnich], contains a copy of the MINIX operating system.

If you are not the oldest of readers, it’s possible that you may not have heard of MINIX. Or if you have, it might be in connection with the gestation of [Linus Torvalds]’ first Linux kernel. It’s a UNIX-like operating system created in the 1980s as a teaching aid, and for a time it held a significant attraction as the closest you could get to real UNIX on some of the affordable 16-bit desktop and home computers. Amiga owners paid for copies of it on floppy disks, it was even something of an object of desire. It’s still in active development, but it’s fair to say its attraction lies in its simplicity rather than its sophistication.

It’s thus a worry to find it on the Intel ME, because in that position it lies at the most privileged level of access to your computer’s hardware. Your desktop operating system, by contrast, sees the hardware through several layers of abstraction in the name of security, so a simple OS with full networking and full hardware access represents a significant opportunity to anyone with an eye to compromising it. Placing tinfoil hats firmly on your heads as the unmistakable thwop of black helicopters eases into the soundscape you might claim that this is exactly what they want anyway. We would hope that if they wanted to compromise our PCs with a backdoor they’d do it in such a way as to make it a little less easy for The Other Lot. We suspect it’s far more likely that this is a case of the firmware being considered to be an out-of-sight piece of the hardware that nobody would concern themselves with, rather than a potential attack vector that everyone should. It would be nice to think that we’ll see some abrupt updates, but we suspect that won’t happen. [Bill’s] worked on his homebrew computer for almost a decade. He didn’t start with a Z80 processor like a lot of the projects we’ve seen, but instead build the CPU itself from 74-series TTL chips and a ridiculous amount of wire wrapping to connect it all.

The video after the break shows off the functionality. We love the front panel, which is packed with information but manages to remain organized and offers many convenient features. Our favorite is the ability to pause execution and scroll through the registers by spinning the dial. The clock signal has a variable speed which is selected by an internal DIP switch package that can be changed during a pause. It runs MINIX and has a library of programs, but perhaps most surprising is its ability to serve webpages.

Lately we’ve been interested in drilling down through program language abstractions to understand what is going on inside the silicon. This has given us new respect for those building processors from scratch. Think of it this way, if you actually need to build each instruction out of gates, you’ll be able to understand how those instructions work at the most fundamental level.