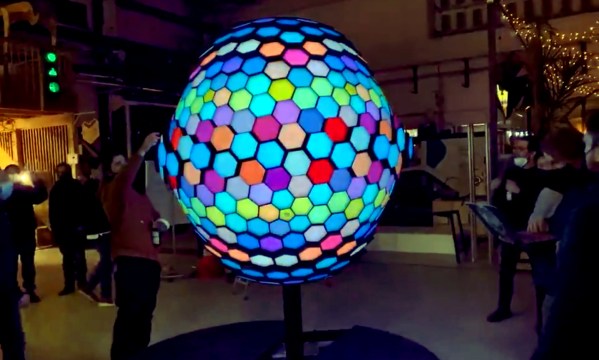 Marvelously conceived and exquisitely executed, this huge ball made up of hexagon tiles combines the best of blinky LEDs and animatronics into one amorphic ball.

The creation of [Nicholas Perillo] of Augmentl along with [MindBuffer], full details of the “morph v2” project have not yet been published. However, some tantilizing build progress is documented on [Nicholas’] Insta — most especially through the snapshots in the story thread spanning the last seven months. The scope of the project is brought into focus with time lapse video of hundreds of heat-set inserts, bundles of twisted wire, a pile of 1500 sliding rails, cases full of custom-order stepper motors, and thick cuts of copper bus bars to feed power up the shaft and out to the panels.

The demo video after the break is mesmerizing, shot by [nburdy] during a demo at MotionLab Berlin where it was built. Each hex tile is backed by numerous LEDs and a stepper motor assembly that lets it move in and out from the center of the ball. Somehow it manages to look as though it’s flowing, as they eye doesn’t pick up spaces opening between tiles as they are extended.

The Twitter thread fills in some of the juicy details: “486 stepper motors, 86,000 LEDs and a 5 channel granular synth engine (written by @_hobson_ no less, in @rustlang of course).” The build also includes speakers mounted in the core of the ball, hidden behind the moving LED hexes. The result is an artistic assault on reality, as the highly coordinated combinations of light, sound, and motion make this feel alive, otherwordly, or simply a glitch in the matrix. Watching the renders of what animations will look like, then seeing it on the real thing drives home the point that practical effects can still snap us out of our 21st-century computer-generated graphics trance.

It’s relatively easy to throw thousands of LEDs into a project these days, as PCBA just applies robots to the manufacturing problem. But motion remains a huge challenge beyond a handful of moving parts. But the Times Square billboard from a few years ago and the Morph ball both show it’s worth it.

As you’ve guessed from the name, this is the second Morph ball the team has collaborated on. Check out details of v1, a beach ball sized moving LED ball.

END_OF_DOCUMENT_TOKEN_TO_BE_REPLACED 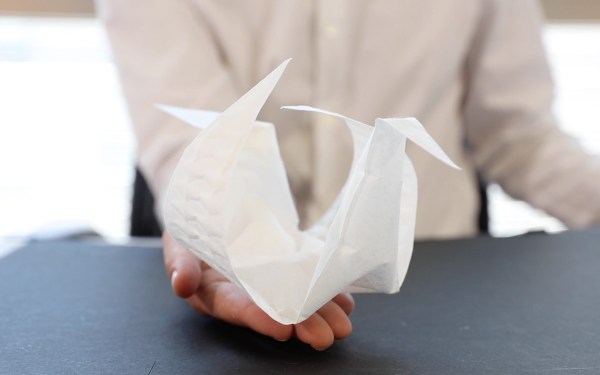 Odds are that if you’ve been to the beach or gone camping or somewhere in between, you are familiar with inflatable products like air mattresses. It’s nothing spectacular to see a rectangle inflate into a thicker, more comfortable rectangle, but what if your air mattress inflated into the shape of a crane?

We’ve seen similar ideas in quadcopters and robots using more mechanical means, but this is method uses air instead. To make this possible, the [Tangible Media Group] out of [MIT’s Media Lab] have developed aeroMorph

— a program that allows the user to design inflatable constructs from paper, plastic or fabric with careful placement of a few folding joints.

These designs are exported and imprinted onto the medium by a cartesian coordinate robot using a heat-sealing attachment. Different channels allow the medium to fold in multiple directions depending on where the air is flowing, so this is a bit more complicated than, say, a bouncy castle. That, and it’s not often you see paper folding itself. Check it out!

END_OF_DOCUMENT_TOKEN_TO_BE_REPLACED

Coca-Cola has updated their sign in Times Square, and this one has a mesmerizing 3D aspect to it, giving the spooky feeling you get from watching buildings curl up into the sky in the movie, Inception. That 3D is created by breaking the sign up into a 68’x42′ matrix of 1760 LED screens that can be independently extended out toward the viewer and retracted again. Of course, we went hunting for implementation details.

On Coca-Cola’s webpage listing the partners involved in putting it together, Radius Displays is listed as responsible for sign design, fabrication, testing and installation support. Combing through their website was the first step. Sadly we found no detailed design documents or behind-the-scenes videos there. We did find one CAD drawing of a Moving Cube Module with a 28×28 matrix of LEDs. Assuming that’s accurate then overall there are 1,379,840 LEDs — try ordering that many off of eBay. EDIT: One behind-the-scenes video of the modules being tested was found and added below.

So the patent hunting came next, and that’s where we hit the jackpot. Read on to see the results and view the videos of the sign in action below.

END_OF_DOCUMENT_TOKEN_TO_BE_REPLACED It is able to move by the extension of each of its telescopic edges, and as it morphs, the centre of gravity shifts, allowing it to roll over. It is far from an efficient way to move, but it is quite entertaining to watch!

The custom two-directional linear actuators were designed to ensure the weight is symmetrically distributed on each axis, and they were able get the current draw down to about 200mA during actuation, which means with a few strategically placed battery cells, it’ll be able to go wireless too. The prototype unit is controlled by a single Arduino, which sends the commands to each motor-encoder couple.

[William] is hoping to develop it into a full scale architectural prototype, and by 2015 hopes to have these interactive robotic structures rolling around public parks. The architectural end goal is to allow for buildings to respond to environmental inputs, like daylight and temperature.

Confused? Check out the video after the break.

END_OF_DOCUMENT_TOKEN_TO_BE_REPLACED

Once again, we’re wowed over [Zenta]’s robotic skill. A few months ago, [Zenta] posted a video of his MorpHex hexapod spherebot that left us awed. After a few long months, more bits of MorpHex have made it onto the chassis. [Zenta] says his project isn’t done but it’s still enough to knock our socks off.

Going through the [Zenta] archives, there’s a little more to go on this time around. The MorpHex will be made up of two hemispheres, but only the bottom one will be able to walk. That’s really not that bad because [Zenta] gave the upper panels 1 degree of freedom. Just enough to scare off predators, we’re sure.

The chassis and the legs are amazing little pieces of engineering. Despite all the work [Zenta] has put into his MorpHex, there’s still work to be done. He hasn’t gotten the sphere to roll on command yet. We’ll be sure to post a video of the robot dancing to some lo-fi. Check that out after the jump.

END_OF_DOCUMENT_TOKEN_TO_BE_REPLACED