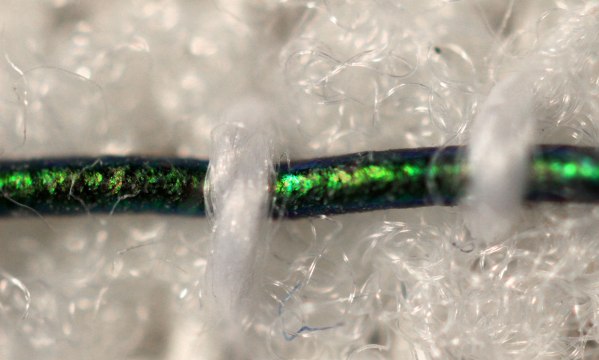 When you saw the picture for this article, did you think of a peacock’s feather? These fibers are not harvested from birds, and in fact, the colors come from transparent rubber. As with peacock feathers, they come from the way light reflects off layers of differing materials, this is known as optical interference, and it is the same effect seen on oil slicks. The benefit to using transparent rubber is that the final product is flexible and when drawn, the interference shifts. In short, they change color when stretched.

Most of the sensors we see and feature are electromechanical, which has the drawback that we cannot read them without some form of interface. Something like a microcontroller, gauge, or a slew of 555 timers. Reading a single strain gauge on a torque wrench is not too tricky, but simultaneously reading a dozen gauges spread across a more complex machine such as a quadcopter will probably require graphing software to generate a heat map. With this innovation it could now be done with an on-board camera in real-time. Couple that with machine learning and perhaps you could launch Skynet. Or build a better copter.

The current proof-of-concept weaves the fibers into next-generation bandages to give an intuitive sense of how tightly a dressing should be applied. For the average first-aid responder, the rule is being able to slide a finger between the fabric and skin. That’s an easy indicator, but it only works after the fact whereas saying that the dressing should be orange while wrapping gives constant feedback. 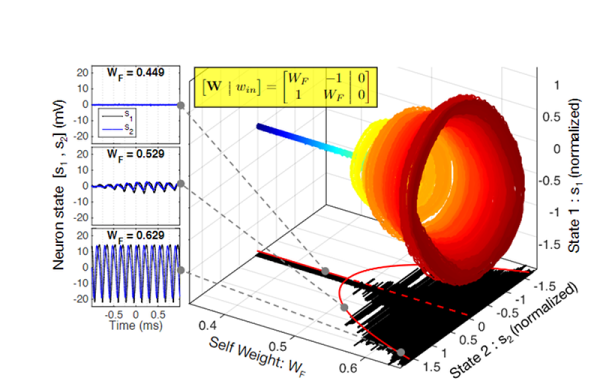 Neural networks ought to be very appealing to hackers. You can easily implement them in hardware or software and relatively simple networks can perform powerful functions. As the jobs we ask of neural networks get more complex, the networks require more artificial neurons. That’s why researchers are pursuing dense integrated neuron chips that could do for neural networks what integrated circuits did for conventional computers.

Researchers at Princeton have announced the first photonic neural network. We recently talked about how artificial neurons work in conventional hardware and software. The artificial neurons look for inputs to reach a threshold which causes them to “fire” and trigger inputs to other neurons.

To map this function to an optical device, the researchers created tiny circular waveguides in a silicon substrate. Light circulates in the waveguide and, when released, modulates the output of a laser. Each waveguide works with a specific wavelength of light. This allows multiple “inputs” (in the form of different wavelengths) to sum together to modulate the laser.

The team used a 49-node network to model a differential equation. The photonic system was nearly 2,000 times faster than other techniques. You can read the actual paper online if you are interested in more details.

There’s been a lot of work done lately on both neural networks and optical computing. Perhaps this fusion will advance both arts.

[dyril] over on the EEVblog has a broken LED TV. It’s a fairly standard Samsung TV from 2012 that unfortunately had a little bit of corrosion on the flexible circuit boards thanks to excessive humidity. One day, [dyril] turned on his TV and found about one-third of the screen was glitchy. After [dyril] took the TV apart, an extremely strange fix was found: shining a light on the corroded flexible circuit board fixed the TV.

The fix, obviously, was to solder a USB light to a power rail on the TV and hot glue the light so it shines on the offending circuit. Solving a problem is one thing, though, understanding why you’ve solved the problem is another thing entirely. [dyril] has no idea why this fix works, and it’s doubtful anyone can give him a complete explanation.

The TV is fixed, and although you can’t argue with results, there is a burning question: how on Earth does shining a light on a broken circuit board fix a TV? Speculation on the EEVblog thread seems to have settled on something similar to the photonic reset of the Raspberry Pi 2. In the Raspberry Pi 2, a small chip scale package (CSP) used in the power supply section would fail when exposed to light. This reset the Pi, and turned out to be a very educational introduction to photons and energy levels for thousands of people with a Pi.

The best guess from the EEVblog is that a chip on the offending board handles a differential signal going to the flex circuit. This chip is sensitive to light, and shutting it down with photons allows the other half of the differential signal to take over. It’s a hand-wavy explanation, but then again this is a very, very weird problem.

You can check out [dyril]’s video demonstration of the problem and solution below. Thanks [Rasz] for sending this one in.