While most of the teams in this year’s Red Bull Creation didn’t really pay attention to the theme of ‘reinventing the wheel’, 1.21 Jiggawatts did. Their creation, a giant typewriter that can be suspended along the side of a building, takes its inspiration directly from 1970s typewriters and printers. Yes, it’s a giant daisy wheel typewriter.

The basic idea of a daisy wheel typewriter is a wheel with a few dozen petals, on the end of which is a single letter. To print a letter, the wheel spins around, and a solenoid mechanism strikes the letter against a piece of paper. This was cutting edge tech in the 70s, and was a fast (and cheap) way for computers to print out letter-quality reports.

1.21 Jiggawatts used a ladder as the rail to move down a line of text. The movement from line to line was supposed to be done by dangling the ladder off a chain with a few sprockets attached to motors. Unfortunately, the team couldn’t quite get the machine working for the competition and live event, but the build does show an amazing amount of creativity and respect for classic, forgotten technology. 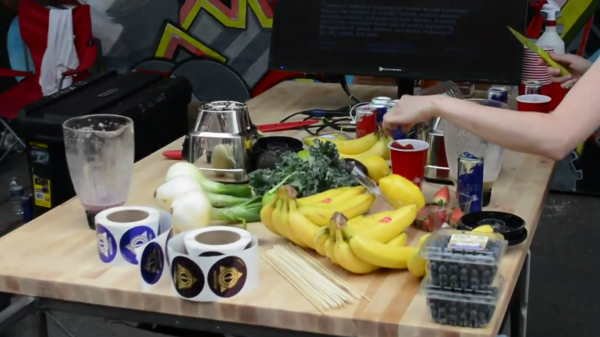 While the bulk of the building for the Red Bull Creation happened at a recycling center/art space in Detroit, the judging was at Detroit’s Eastern Market, a huge farmer’s market that has just about everything. The Omnicorp hackerspace is just off Eastern Market, so this is their territory: they know what will work. For their entry for this year’s RBC, they’re going local: a wheeled information kiosk that’s also a great place to make smoothies and grill up a few veggies and dogs.

While the information kiosk the team is commendable, the idea of giving all the visitors to the Red Bull Creation event a halfway decent lunch is a great idea: all the ingredients are already there, so all that’s needed is an extension cord and a little bit of charcoal.

After the Red Bull Creation event is where this project would have really shined: hundreds of people going through at least six kegs, fireworks, a friggin’ dragon dump truck, and a DJ loud enough to be heard a half mile away. We’ll get to that in a post tomorrow. Let’s just say our head editor had fun.

We rolled into Detroit this morning and immediately wanted to know what the teams for the Red Bull Creation were up to. But first thing’s first, what’s the surprise theme? [Brian Benchoff] caught up with [Tyler Hansen] and [Jason Naumoff] who filled us in. The theme is “Reinvent the Wheel”.

The seven finalist teams are competing in a live, non-stop build which started yesterday and continues until tomorrow evening.