In the beginning, around 2011 or thereabouts, there was an infinite variety of designs available for anyone to build their own 3D printer. There were Mendels, some weirdos were actually trying to build Darwins, and deltas were starting to become a thing. In the years since then, everyone just started buying cheap Prusa clones and wondering why their house burnt down.

One of the most innovative printers of this era was the Tantillus. It was a small printer, with the entire frame fitting in a 250mm square, but still able to print a 100mm cube. You could print the entire printer, and it was adorable. Face it: most of your prints aren’t bigger than 100mm unless you’re purposely printing something huge, and having a low moving mass is good.

The Tantillus has fallen by the wayside, but now it’s back. The Tantillus R — the ‘R’ means ‘reborn’ — is the latest project to take the design goals of the original Tantillus and bring it into the era of the modern RepRap ecosystem. (German, Google Translatrix, but the English translation of all the documentation is in the works),

Of note in this new design, the Tantillus R is still using shafts driven with high-test fishing line, driven by steppers and belts. The R version is getting away from the J-head, but in the interests in keeping the moving mass down, the hotend is a Merlin. This might seem an especially odd choice in the age of all-metal hotends, but again the goal is to keep moving mass down. As you would expect from a modern 3D printer, there’s support for a heated bed, you can plug a Raspberry Pi into it for Octoprint, and in true RepRap fashion, most of the parts are printable.

While the era of self-build 3D printers is probably over — you can’t compete with the cheap Chinese firestarters on price — the Tantillus R is a great project that retains the spirit of the RepRap projects while adding a few modern niceties and can still produce some impressive prints. 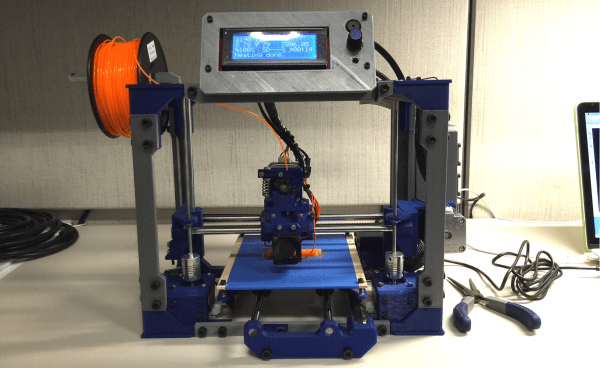 The term RepRap is fairly common and gets thrown around too often when generally talking about DIY 3D Printers. We must remember that the intent of the RepRap project “…is about making self-replicating machines…” and of course “…making them freely available for the benefit of everyone…“.

[MiniMadRyan] has recently designed a printer that could be considered the embodiment of the RepRap philosophy. He’s calling it the MapleMaker Mini V2. An extremely high percentage of the parts required to build this printer are, in fact, printable themselves. The frame pieces are printed, all of which can be printed on the printer thanks to the 6x8x6 inches print volume. The overall design is aesthetically pleasing, resembling that of a Lulzbot Mini.

The MapleMaker Mini V2 is self-replicating. The other part of the RepRap goal is to be free to the community. The design files are available on YouMagine and the assembly manual is better than those provided by most commercial companies. So if you’re looking to build a printer, be sure to add this one to your short list! 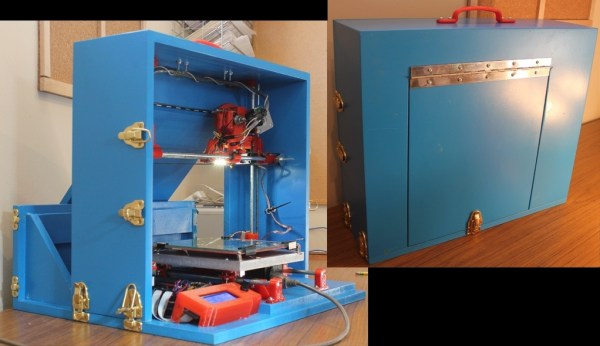 The great thing about RepRaps are that there are so many to choose from! No matter what features or design intent you could want, there is probably a RepRap for that. Even so, there has been a recent addition to the RepRap family. Creator [jlguil] calls it the Case-Rap, and for good reason, the frame of the printer folds up into a suitcase.

The Case-Rap is inspired by the Mendel90 which tries to improve on the original Mendel by replacing the threaded rods for a more rigid sheet material frame with bracing to keep the X, Y and Z axes perpendicular to each other. The Case-Rap goes a little further with the design to have the frame also perform double duty as a travel case.

Check out the video after the break, the printer is actually built in 2 complete separate assemblies. The X and Z axes are mounted in a 4-sided wooded frame. The Y axis and the electronics are mounted on a 2-sided wooden frame. When the frame pieces are latched together in one orientation, they conceal the printer inside a suitcase-sized box. The latch positions were thoughtfully placed so the frame pieces could also be latched together in ‘printer mode’. Setting up and breaking down the printer takes all of 30 seconds.

You may think a super portable printer has to be small… but you’d be wrong. The Case-Rap has a commendable 8x8x8 inch print area. According to [jlguil], the total DIY cost comes in around 350$ CAD, which is not too bad for a 3D printer, and pretty good for one that is unique, portable and capable.

END_OF_DOCUMENT_TOKEN_TO_BE_REPLACED 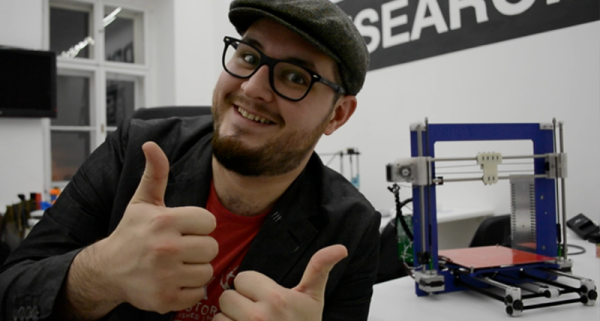 The Hackaday European tour continues, this time in Prague with Josef Průša (Google translate), core developer in the RepRap project, feature at all the Maker Faires and cons, and creator of his namesake, the Prusa Mendel and i3 printers.

[Prusa]’s involvement with the RepRap project started with a RepRap Mendel, the second iteration of RepRap hardware, but the first popular and easy to build version. [Jo] found the Mendel rather difficult to build, so he loaded OpenSCAD and started to design his own version of the hardware. This version became the de facto standard RepRap for a few years, with many inspired by and derivative printers making their way to hackerspaces and workshops around the world.

A few years ago, [Prusa] was one of the first to make a complete break with the traditional ‘threaded rod and nut’ construction of RepRaps with the introduction of the Prusa i3. This was the first model that had a metal plate as the frame, another feature that would be seen in dozens of other models. It’s not something that was without controversy, either; using a metal plate for the frame doesn’t allow for as much self-replication, something that’s a core value of the RepRap project. That didn’t matter to the community; the Prusa i3 or a similar design is the third most popular printer on 3Dhubs.

What’s the future of the Prusa name? There is an i4 in the works, and I’m pretty sure that’s all I can tell you. Someone already bought the Prusai4 domain, so there may be a name change.

In the interview below, [Prusa] goes over his involvement with the RepRap project, his business, what he considers to be the latest advances in 3D printing for the past year, what the worst things about the 3D printing scene is (it’s Kickstarter), the state of the RepRap project, and thoughts on SLS, DLP, and SLA printing technologies. Video below.

END_OF_DOCUMENT_TOKEN_TO_BE_REPLACED 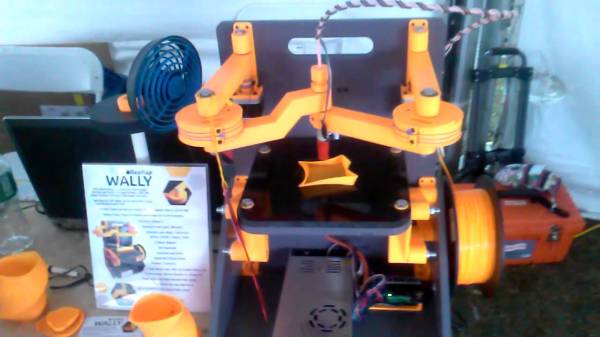 SCARA based 3D printers seem to be all the rage these days, and with good reason. This RepRap Wally doesn’t use any linear rods or timing belts — in fact, it can even print larger versions of itself with each iteration! Well, minus the electronics of course.

It was first spotted out in the wild at the NYC Makerfaire, and looks to be a pretty slick design. Using fully 3D printed limbs, the steppers move the arms using a fishing line. To reduce the load on the joints, a bowden extruder is also used. The really cool part of this is the z-axis, it uses a 4-bar linkage to stay level, but because of this, it also moves along an arc in the y-axis as it raises or lowers. This is accounted for in the firmware — otherwise you’d have some rather interesting curved prints!

Stick around after the break to see it in action, it’s a nice change to watch from the standard gantry style printers.

END_OF_DOCUMENT_TOKEN_TO_BE_REPLACED 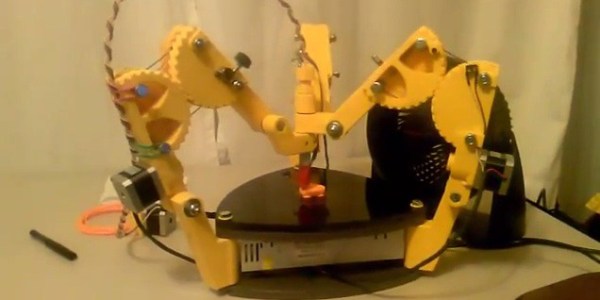 Just when you think you’ve seen it all in the 3D printer world, something new pops up! [Nicholas Seward] posted a video of RepRap Simpson, his latest project.  Simpson is a delta robot – but unlike any delta we’ve seen before. Previous offerings vertical rails on which the arms travel. As you can see, this design mounts three articulated arms directly to the base of the printer, using steel cables as part of the joint mechanism.

Judging by [Nicholas’] posts on the RepRap forums, Simpson’s grounded delta design has already gone through a few revisions. The basic geometry though, has remained the same. [Nicholas] calls this edition a “Proportional Gear Drive Joint Simpson”. The name may not roll off the tongue, but the movements are incredibly smooth, organic, and fast.

As with any delta design inverse kinematics play a huge role in the software. [Nicholas] is trying to simplify this with an optical calibration system. For the adventurous, the equations are posted on the forums, and a python Gcode preprocessor is posted on Thingiverse.

Even Simpson’s base received special attention.  It’s built from a water jet cut piece of basalt.  We like the use of opposed helical gears on the large joints, as well as the guitar machine heads used to tension the cable drive. One thing we are not sure of is the longevity of system – will cable stretch play an issue? Will the printed parts suffer wear from the cables? Only time will tell.