[Modustrial Maker] is at it again with another seriously cool LED visualizer. This time around, he’s built pair of pendant lights inspired by the rings of Saturn.

The rings are made mostly of walnut plywood using a circle router jig to make the cut easier. If you are inspired to make these for yourself, [Modustrial Maker] is clear — the order in which you cut out the pieces of the rings is absolutely critical. The pieces are glued together — with any edges sanded smooth — and edgebanding applied using a hot air gun due to the curved surface before staining. Duplicate for the second (or more if you so choose!) rings. Be forewarned — a little geometry will be needed to find anchor points that will keep the rings properly balanced.

[Modustrial Maker] suggests an off-the shelf LED controller to handle the visualizations and lighting effects, but he used an Arduino Mega clone as the brains — code available here, a MonkeyJack MAX9814 electret mic, and a four-channel RF remote/transceiver to control the different modes. Pulsing along to the music, these rings make for sleek lighting indeed.

END_OF_DOCUMENT_TOKEN_TO_BE_REPLACED 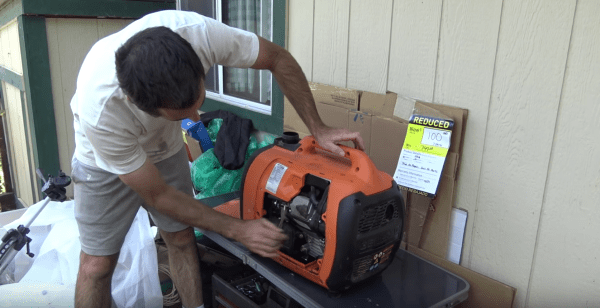 [Jennies Garage] found a used and abused inverter based generator in the clearance section of his local home improvement store. The generator had been returned on a warranty claim and was deemed uneconomical to fix. Originally $799, [Jennies Garage] picked it up for just $25. He documented his quest to get the device running with a trio of videos.

The generator had spark, but didn’t want to fire. The only obvious problem was the fact that the machine had been overfilled with oil. There was little or no compression, but that is not uncommon with modern small engines – many of them have a compression release mechanism which makes them easier to start.

With all the obvious problems eliminated, the only thing left to do was tear into the engine and figure out what was wrong. Sure enough, it was a compression issue. The overfull oil condition had forced engine oil up around the piston rings, causing them to stick, and snapping one of the rings. The cylinder bore was still in good shape though, so all the engine needed was a new set of rings.

That’s when the problems started. At first, the manufacturer couldn’t find the rings in their computer system. Then they found them but the rings would take two weeks to ship. [Jennies Garage] isn’t the patient type though. He looked up the piston manufacturer in China. They would be happy to ship him complete pistons – but the minimum order quantity was 5000. Then he started cross-referencing pistons from other engines and found a close match from a 1960’s era 90cc motorcycle. Ironically, it’s easier to obtain piston rings for an old motorcycle than it is to find them for a late model generator.

The Honda rings weren’t perfect – the two compression rings needed to be ground down about 1/2 a millimeter. The oil ring was a bit too thick, but thankfully the original oil ring was still in good shape.

Once the frankenpiston was assembled, it was time to put the repair to the test. [Jennies Garage] reassembled the generator, guessing at the torque specs he didn’t have. The surgery was a complete success. The generator ran perfectly, and lit up the night at the [Jennies Garage] cabin.

If you’re low on gas, no problem. Did you know you can run a generator on soda? Want to keep an eye on your remote generator? Check out this generator monitor project.

END_OF_DOCUMENT_TOKEN_TO_BE_REPLACED

Making beautiful things from epoxy and wood happens to be [Peter Brown’s] area of expertise. He was recently quested with reverse engineering the ring design of the Canadian manufacturer secret wood — a unique combination of splintered wood and epoxy — and achieved impressive results.

END_OF_DOCUMENT_TOKEN_TO_BE_REPLACED

[Johan von Konow] wanted to make something special as a wedding gift to his wife. He decided a pair of interlocking miniature rings would be the perfect keepsake. He started his search for a way to mill the wooden rings from a solid piece of wood, and documented his journey for our enjoyment.

This project poses an interesting challenge. Most CNC mills offer three axes of freedom, but he only had a 2D mill meant for routing PCBs. This means the cuts can only be made from the top down at one depth. In order to fabricate the rings he needed to cut from more than one side. With more study, [Johan] discovered that it would be necessary to cut the wood stock from eight different angles before the rings would be complete.

The solution to the problem was to first mill a jig to hold the wood stock. It has positions to hold the stock at each different angle. The final step before starting the cut was to mill the stock itself to perfectly fit his custom jig. We think it turned out great, thanks in part to hand filing, sanding, and polishing to smooth the marks left from milling.