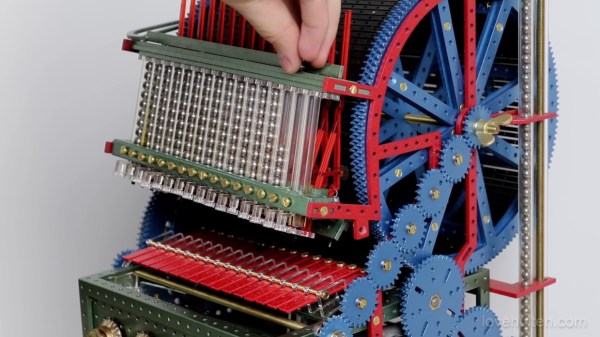 If imitation is the sincerest form of flattery, what then are we to make of something that shares only a few of the original’s design elements, operates in a completely different way, and has been scaled down to a fifth its size? Still seems like flattery to us.

Despite the changes, it’s clear where [Love Hultén] took inspiration for his miniature Marble Machine XS. Readers will no doubt see in it elements from [Martin Molin]’s original Marble Machine, the fantastic plywood and Lego musical contraption, along with his new Marble Machine X, the construction of which never seems to end. Like the originals, [Love]’s miniature version uses a lot of steel balls, albeit considerably scaled down, and it still uses a programming drum to determine where and when to drop them. But rather than strike real traditional instruments, the falling balls strike synthesizer keys, triggering a range of sounds through its built-in speaker. The whole thing is powered by a small electric motor rather than being hand-cranked and is small enough to sit on a desktop, a decided advantage over the mammoth machines to which it pays homage.

We have to say that as much as we love the hacksmanship of the original Marble Machine and the craftsmanship of its successor, the look and feel of [Love]’s machine just blows us away. We’re not sure what materials he used, but the whole hammertone paint scheme and Meccano look is a feast for nostalgic eyes.

END_OF_DOCUMENT_TOKEN_TO_BE_REPLACED END_OF_DOCUMENT_TOKEN_TO_BE_REPLACED

We’re going to let you decide which of these two projects is a delight, and which is amusing.

The project on the left is a desktop kinetic sculpture. We like it because of its size and simplicity. A single AA battery drives the gear head motor that provides the lift for the metal balls. There are several different routes for them to take in returning to the lift wheel, each route determined by a mechanical combination of the metal spheres. This is more of a month-long build than some of the other kinetic devices we’ve seen which could take a lifetime.

The offering on the right is a perpetual motion machine. Well, it will be once that guy gets the kinks worked out. You can see him explain how he intends this works in the video after the break. We’re not betting on perpetual motion, but if we did, our money would be on something like the Steorn Orbo replica and not on this.