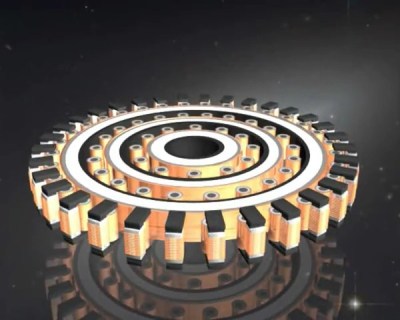 END_OF_DOCUMENT_TOKEN_TO_BE_REPLACED

Now this isn’t a perpetual motion machine, but it’s darn close. What [lasersaber] has done instead is to make the EZ Spin, an incredibly efficient motor that does nothing. Well, nothing except look cool, and influence tons of people to re-build their own versions of it and post them on YouTube.

The motor itself is ridiculously simple: it’s essentially a brushless DC motor with a unique winding pattern. A number of coils — anywhere from six to twenty-four — are wired together with alternating polarity. If one coil is a magnetized north, its two neighbors are magnetized south, and vice-versa. The rotor is a ring with permanent magnets, all arranged so that they have the same polarity. A capacitor is used for the power source, and a reed switch serves as a simplistic commutator, if that’s even the right term.

As the motor turns, a permanent magnet passes by the reed switch and it makes the circuit. All of the electromagnets, which are wound in series, fire and kick the rotor forwards. Then the reed switch opens and the rotor coasts on to the next position. When it gets there the reed switch closes and it gets a magnetic kick again.

The catch? Building the device so that it’s carefully balanced and running on really good (sapphire) bearings, entirely unloaded, and powered with high impedance coils, leads to a current consumption in the microamps. As with most motors, when you spin it by hand, it acts as a generator, giving you a simple way to charge up the capacitor that drives it. In his video [lasersaber] blows on the rotor through a straw to charge up the capacitor, and then lets it run back down. It should run for quite a while on just one spin-up.

The EZ Spin motor is absolutely, positively not perpetual motion or “over-unity” or any of that mumbo-jumbo. It is a cool, simple-to-build generator/motor project that’ll definitely impress your friends and challenge you to see how long you can get it running. Check out [lasersaber]’s website, this forum post, and a 3D model on Thingiverse if you want to make your own.

END_OF_DOCUMENT_TOKEN_TO_BE_REPLACED

You thought we forgot about your favorite Hackaday comment game, didn’t you? Well, not only is ‘Real or Fake?’ back with a new installment, but this time it concerns everybody’s favorite impossibility: perpetual motion machines! It’s likely that you’ve already seen the photos of Brazilian energy group RAR Energia’s generator “powered exclusively by gravity” (translated). If you’re rolling your eyes and exclaiming “this is so last year..” you might want to scroll down to the bottom of the page; they’re still building this monstrosity and they’ve included some diagram images. Perhaps someone who reads Portuguese can better translate the claim that the devices are “demonstration models with capacity to generate 30kW.” Oh, didn’t you know? There are two of them now: one in Brazil that is presumably functioning, and a second under construction in Gilman, Illinois.

Now, before you all scream “Photoshopped,” take a gander at a FotoForensics analysis of one of the images, where ELA (error level analysis) seems to indicate consistent levels of compression. EXIF data shows the pictures were shot with a Sony DSC-WX5 and saved in PhotoScape. It may be simpler than that: you can easily recognize the same employees in different shots from different angles, and there are quite a lot of photos. RAR Energia’s most recent endeavor—a second machine in Gilman Illinois—seems to have been erected in the past two months. The Gilman warehouse is located on property belonging to bio-diesel manufacturing firm Incobrasa Industries (named a “Company of the [RAR Energia] group” on the RAR Energia site). Here’s a little internet sleuthing for your consideration: a photo of the completed warehouse and a Google maps link to the location in question (40.763176, -88.012706). Note the distinctly shaped building in the background (another view here, during construction), which can be found due south of the location indicated in the Google maps link. We’re not suggesting that you completely rule out image manipulation, but if it’s Photoshopped, it’s a damned elaborate job.

Unfortunately, there aren’t any videos demonstrating motion or any explanation for how the system works other than vagaries about perpetual energy. So, does this thing exist—and did this company really build two of them? Does it work…or, well, somehow do something?

The machine is set up along two stories of a building, with cables, pulleys, and levers constantly pressing an elevator button. The device is powered by the elevator doors opening, so when the elevator opens of the first floor, the part of the machine on the second story calls the elevator. This repeats ad infinitum.

We’re tempted to call this a [Rube Goldberg] machine, but that doesn’t seem to fit this machine that does absolutely nothing. Calling it a useless box is more fitting, but this is far, far more impressive than a box that turns itself off. Whatever it is, you can see a video of it in action below.

END_OF_DOCUMENT_TOKEN_TO_BE_REPLACED

We’re going to let you decide which of these two projects is a delight, and which is amusing.

The project on the left is a desktop kinetic sculpture. We like it because of its size and simplicity. A single AA battery drives the gear head motor that provides the lift for the metal balls. There are several different routes for them to take in returning to the lift wheel, each route determined by a mechanical combination of the metal spheres. This is more of a month-long build than some of the other kinetic devices we’ve seen which could take a lifetime.

The offering on the right is a perpetual motion machine. Well, it will be once that guy gets the kinks worked out. You can see him explain how he intends this works in the video after the break. We’re not betting on perpetual motion, but if we did, our money would be on something like the Steorn Orbo replica and not on this.