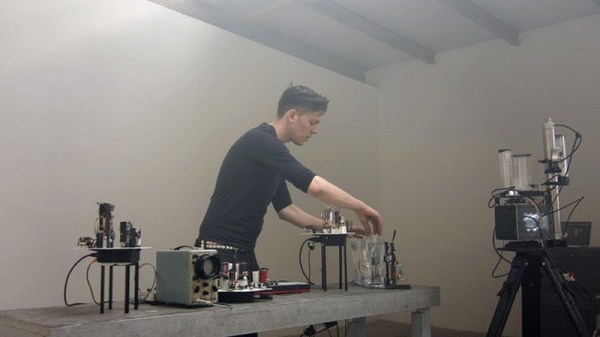 [Moritz Simon Geist]’s experiences as both a classically trained musician and a robotics engineer is clearly what makes his Techno Music Robots project so stunningly executed. The robotic electronic music he has created involves no traditional instruments of any kind. Instead, the robots themselves are the instruments, and every sound comes from some kind of physical element.

A motor might smack a bit of metal, a hard drive arm might tap out a rhythm, and odder sounds come from stranger devices. If it’s technological and can make a sound, [Moritz Simon Geist] has probably carefully explored whether it can be turned into one of his Sonic Robots. The video embedded below is an excellent example of his results, which is electronic music without a synthesizer in sight.

We’ve seen robot bands before, and they’re always the product of some amazing work. The Toa Mata Lego Band are small Lego units and Compressorhead play full-sized instruments on stage, but robots that are the instruments is a different direction that still keeps the same physical element to the music.

END_OF_DOCUMENT_TOKEN_TO_BE_REPLACED 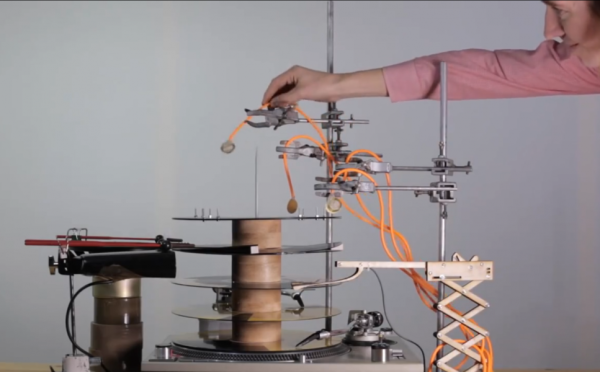 We’ve got to admit, we don’t have any idea what to call this hack. Artist [Graham Dunning] refers to it somewhat dryly as the “Mechanical Techno method”, but that doesn’t quite do it justice. We’re thinking “Turntable-sequencer-synthesizer-beat-box-dub-stepper thingy. With cowbell.”

Call it what you will, but [Graham] has really gone the distance in extracting as much sound as possible from the humble turntable, which is used as more of a synchronizer than a sound source. Although it does play records too – at least part of them; [Graham] masks the grooves and anchors the tone arm so that only part of a track is played. Other records are masked with conductive film over which wiper contacts are placed, providing triggers for various synthesizers. Particularly clever is the mechanical percussion section; a record is cut radially to form cams that mechanical followers trip over periodically to hit either the cone of a woofer for bass notes, or a cowbell for – well,  cowbell.

It may not appeal to everyone, but you’ve got to admit there’s something mesmerizing about watching this rig in action. The beat is pretty catchy, and as you can see in the live performance video after the break, there’s a lot of room for [Graham] to express himself with this instrument. We wouldn’t mind seeing how Compressorhead would put this rig to work in their performances either.

END_OF_DOCUMENT_TOKEN_TO_BE_REPLACED

As part of Nuit Blanche, Toronto’s annual community art event, the CN Tower’s lighting system got put to some creative use. Installed 2 years ago, the RGB LED-based system is composed of 1330 individually addressable lights lining the glass elevator shafts. It costs just under $1000 to run almost every evening for a month. Named ‘Bright Lights Big City’ (not to be confused with the book, movie, or song of the same name), this project was coordinated by [Ryan Stec]. The lights on the tallest freestanding structure in North America were animated to CIUT 89.5 FM for the entire night. This innovative solution allowed one to appreciate the light show from almost anywhere in the city with access to a radio.