Transcend markets their DrivePro 200 camera for use as a car dashcam. We’re a bit surprised at the quality and apparent feature set for something relegated to a rather mundane task as this. But [Gadget Addict] poked around and found a nice little nugget: you can live stream the video via WiFi; the framerate, quality, and low-lag are pretty impressive. In addition to that, the next hack is just waiting for you to unlock it.

As it stands right now you turn on the camera’s built-in WiFi AP, telnet into two different ports on the device (sending it into smartphone connected mode) and you’ll be able to live stream the view to your computer using RTSP. Great, that in itself is a good hack and we’re sure that before long someone will figure out an automatic way to trigger this. [GA] also found out how to get the thing into script mode at power-on. He hasn’t actually executed any code… that’s where you come in. If you have one of these pull it out and get hacking! It’s a matter put putting files on the SD storage and rebooting. Crafting this file to enable shell access would open up an entire world of hacks, from things like time-lapse and motion sensing to special processing and filtering in real time. We think there’s huge potential so keep us up-to-date as you find new ways to pwn this hardware.

END_OF_DOCUMENT_TOKEN_TO_BE_REPLACED

Over the last few months, a few very capable hackers have had a hand in cracking open a Transcend WiFi-enable SD card that just happens to be running a small Linux system inside. The possibilities for a wireless Linux device you can lose in your pocket are immense, but so far no one has gotten any IO enabled on this neat piece of hardware. [CNLohr] just did us all a favor with his motherboard for these Transcend WiFi SD cards, allowing the small Linux systems to communicate with I2C devices.

This build is based upon [Dmitry]’s custom kernel for the Transcend WiFiSD card. [CNLohr] did some poking around with this system and found he could use an AVR to speak to the card in its custom 4-bit protocol.

The ‘motherboard’ consists of some sort of ATMega, an AVR programming header, a power supply, and a breakout for the I2C bus. [Lohr] wired up a LED array to the I2C bus and used it to display some configuration settings for the WiFi card before connecting to the card over WiFi and issuing commands directly to the Linux system on the card. The end result was, obviously, a bunch of blinking LEDs.

While this is by far the most complex and overwrought way to blink a LED we’ve ever seen, this is a great proof of concept that makes the Transcend cards extremely interesting for a variety of hardware projects. If you want your own Transcend motherboard, [CNLohr] put all the files up for anyone who wants to etch their own board. 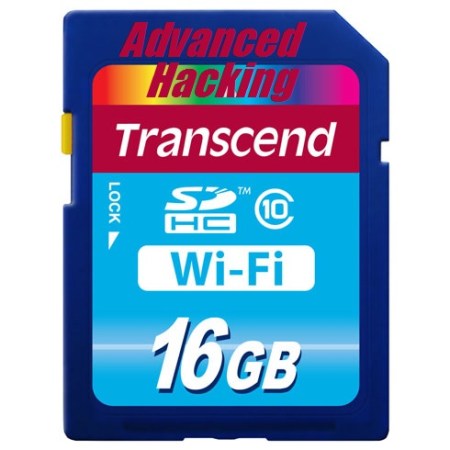 [Dmitry] read about hacking the Transcend WiFi cards, and decided to give it a try himself.   We already covered [Pablo’s] work with the Transcend card. [Dmitry] took a different enough approach to warrant a second look.

Rather than work from the web interface and user scripts down, [Dmitry] decided to start from Transcend’s GPL package and work his way up. Unfortunately, he found that the package was woefully incomplete – putting the card firmly into the “violates GPL” category. Undaunted, [Dmitry] fired off some emails to the support staff and soldiered on.

It turns out the card uses u-boot to expand the kernel and basic file system into a ramdisk. Unfortunately the size is limited to 3MB. The limit is hard-coded into u-boot, the sources of which transcend didn’t include in the GPL package.

[Dmitry] was able to create his own binary image within the 3MB limit and load it on the card. He discovered a few very interesting (and scary) things. The flash file system must be formatted FAT32, or the controller will become very upset. The 16 (or 32)GB of flash is also mounted read/write to TWO operating systems. Linux on the SD card, and whatever host system the card happens to be plugged in to. This is dangerous to say the least. Any write to the flash could cause a collision leading to lost data – or even a completely corrupt file system. END_OF_DOCUMENT_TOKEN_TO_BE_REPLACED