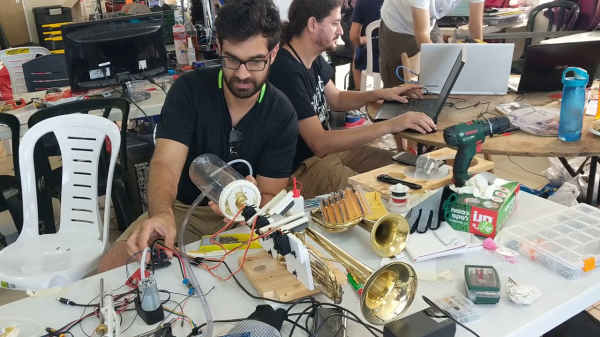 [Uri Shaked] is really into Latin music. When his interest crescendoed, he bought a trumpet in order to make some energetic tunes of his own. His enthusiasm flagged a bit when he realized just how hard it is to get reliably trumpet-like sounds out of the thing, but he wasn’t about to give up altogether. Geekcon 2018 was approaching, so he thought, why not make a robot that can play the trumpet for me?

He scoured the internet and found that someone else had taken pains 20 years ago to imitate embouchure with a pair of latex lips (think rubber glove fingers filled with water). Another soul had written about measuring air flow with regard to brass instruments. Armed with this info, [Uri] and partners [Ariella] and [Avi] spent a few hours messing around with air pumps, latex, and water and came up with a proof of concept that sounds like—and [Uri]’s description is spot-on—a broken robotic didgeridoo. It worked, but the sound was choppy.

Fast forward to Geekcon. In a flash of brilliance, [Avi] thought to add capacitance to the equation. He suggested that they use a plastic box as a buffer for air, and it worked. [Ariella] 3D printed some fingers to actuate the valves, but the team ultimately ended up with wooden fingers driven by servos. The robo-trumpet setup lasted just long enough to get a video, and then a servo promptly burned out. Wah wahhhh. Purse your lips and check it out after the break.

If [Uri] ever gets fed up with the thing, he could always turn it into a game controller a la Trumpet Hero.

END_OF_DOCUMENT_TOKEN_TO_BE_REPLACED