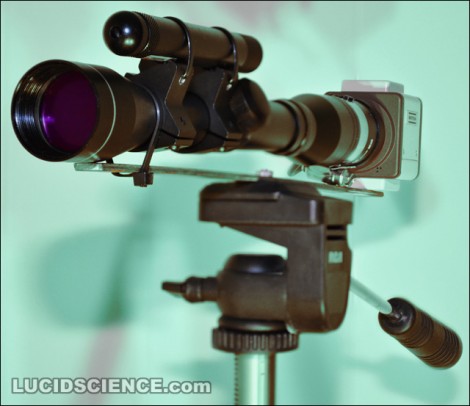 [Oneironaut] is back at it again, churning out yet another great hack in this long-distance night vision build. This isn’t the first time we’ve seen him build a night vision device, you may remember the monocle he put together using the view finder from an old camcorder. This time around he’ll give you look at distant object by using a laser instead of LEDs. He pulled an IR laser diode out of an old CD burner, then used a lens to spread out the dot in order to illuminate a larger area. A standard rifle scope is used as the optics, along with a security camera which can detect the infrared light. As always, he’s done a fantastic job with the images and the write-up. You’ll find his overview video embedded after the break.

END_OF_DOCUMENT_TOKEN_TO_BE_REPLACED Only a little bit out of season but better late than never! [Scott] brings us his Black Rock City Navigator. This unique bike mounted GPS device made for Burning Man 2010 features a servo driven array of LEDs. Two LED strips are used to cover the full 240 degrees of the C shaped city without modifying the servo, and are rotated over the different compass points.

It is powered by a pair of Freescale MC9S08AW32 micro controllers, and a unnamed GPS receiver. One controller deals with the servo and GPS data, the second simply drives the LEDs, and why not if you have plenty?

Housing the device is a four inch black sewer pipe end cap with a ball clamp attached, and is toped off with green acrylic engraved with the map of Black Rock City. Add some stickers (because stickers make everything better) and you have a functional device with a top-notch look for this year’s event. You almost have to love this Arduino based robot just because of the wheels and third leg support. Look closely, do you recognize them? Yep, they’re Capsela parts! That’s a blast from the past and we wonder why we don’t see the strange building toys of yore used in more hacks?

But we digress, this little guy uses continuous rotation servos for locomotion. Perched atop the body is a third servo which scans an IR range finder back and forth to look out for obstacles in its path. The body itself is a Black and Decker rechargeable battery pack called Pocket Power which includes a USB port for a regulated 5V supply. One thing’s for sure, this little guy is fantastic at avoiding pizza and beer… you’ll just have to see for yourself after the break.

END_OF_DOCUMENT_TOKEN_TO_BE_REPLACED