[Rich’s] newest version of a Bluetooth connected Super Nintendo controller takes what was already good and makes it better. We looked at the original version back in May, which is built into a knockoff controller  — [Rich] mentions that he got a lot of flack for defacing retro equipment and wants to set the record straight. The most notable difference between the two controllers is that the batteries are now housed inside the case. He switched over to an 850 mAh Lithium Ion battery, which takes much less room than the four AA batteries did. There is an integrated charger which connects via a mini USB jack as seen in the image above. Bother versions of the controller can be used to play emulators without rooting your Android device.

Unfortunately you won’t get to look inside the case. What we can tell you is that the build no longer uses a BlueSMiRF board , opting for a less expensive Bluetooth solution. We also know that the build is still Arduino compatible, sporting an ATmega328 chip running the bootloader. The lack of detail is because [Rich] is working to market the controller with a limited-quantity preorder. Check out his video presentation of the new version after the break.

END_OF_DOCUMENT_TOKEN_TO_BE_REPLACED This Dippy Bird clock display is simple to build and it’s just waiting to be scaled up for use as a full clock. As shown there are only enough birds in this rendition to read out the hours. More tiers can be added for minutes and you could even add your own temperature readout function using a separate bird as the thermometer.

Other than the fact that there are only four bits of resolution, the first thing you should notice is that these birds have nothing to drink. They’re intended to dip their beaks into a glass of water, leading to evaporation that changes the temperature of the dichloromethane inside to start their teeter-tottering. Water isn’t used because the birds would be in constant motion. Instead a resistor has been placed in the base of each, which heats up when current is passed through it. A bird in motion is a digital 1, and bird at rest is a digital 0. A set of transistors protects the microcontroller from sourcing too much current. In this case an mbed is keeping time but any microcontroller will do. We’ve embedded a quick clip of the dippy bird clock after the break.

END_OF_DOCUMENT_TOKEN_TO_BE_REPLACED END_OF_DOCUMENT_TOKEN_TO_BE_REPLACED

Today, with iPods that can hold entire music collections and cell phones that stream music from the Internet, the lowly cassette seems like an anachronism. [Matt] still has a cassette deck in his truck, but wanted Bluetooth connectivity for his stereo. The obvious solution was to stuff Bluetooth headphones into a cassette adapter.

Audio cassette adapters are dead-simple devices. They’re really just a tape head, stuffed into the shell of a cassette and a wire going out to a media player. To put Bluetooth into his adapter, [Matt] got a cheap pair of Bluetooth headphones and tore them apart. He was left with a circuit board, battery, and two earphones. [Matt] cut off the leads to the ear phones and wired them to the cassette adapter head. After a little bit of modifications to the case, [Matt] had a functional Bluetooth-cassette adapter.

While it’s true [Matt] could have gotten a ready-made Bluetooth cassette adapter shipped from China to his door for $10, there’s not much fun in just buying one. Kudos to [Matt] for going the home-brew route. 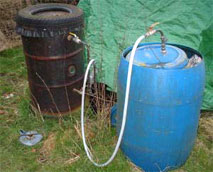 All “methane generator” jokes aside, This one actually serves a useful purpose. Although not an engine hack per se, methane can be used to run an engine. As the traditional method of powering an internal combustion engine, gasoline, gets more and more expensive, alternatives will have to be found. If you happen to live on a farm, or have access to a source of organic waste, this method could serve as a viable one.

One would need quite a bit of waste, as each kilogram yields around 400 liters of methane gas. This amount is enough to run a gas light for around 4 hours. Any sort of useful engine would require quite a bit more than this (chicken farm possibly?).

A process for converting waste to fuel is illustrated in the video after the break. Extreme caution should be used if attempting to do something like this. There is a danger of not only flammable gas leaking and catching on fire or exploding, but the organic material can be quite toxic as well. END_OF_DOCUMENT_TOKEN_TO_BE_REPLACED