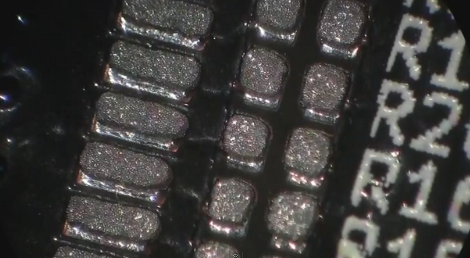 The next issue is placing the components. [Scott] shows off some vacuum tweezers he built using an aquarium pump. Watch the video after the break to see how small those 0402 parts are when he extracts one of the resistors from the tape packaging. With the board manually populated (check everything twice!) he moves the board to a completely unaltered toaster oven for reflow. We have seen a lot of projects which add controllers to these ovens, but he really makes the case that you don’t need it. Instead, he uses a thermocoupler read by a multimeter just to let him know what’s going on with the temperature. He uses a smart phone as a timer, and switches the oven on and off to match the solder’s heat profile. END_OF_DOCUMENT_TOKEN_TO_BE_REPLACED [Christian] is learning to use the metal milling tools at what we assume is his local Hackerspace. We love this about the communal spaces, they provide so many opportunities to delve into new fields. He embarked on a voyage that included visits to most of the machinery in the shop as he build his own carabiner with a magnetic gate. He’s not going to be hanging off the side of a mountain from it. But his keys or a water bottle will find a happy home thanks to the device.

It all started with some sketches to establish the shape of the overall design. From there he spent some time modelling the frame of the carabiner in CAD. He’s lucky enough to have access to a water jet which took the SolidWorks files and cut out the aluminum frame for him. That left a part with very sharp edges, so he used a wood router with a carbide bit to round them over.

The next part is adding the gate. He used an end-mill to add a mounting area on the frame. The locking ring for the gate was textured using a knurling tool, and the rest is milled with a simple cutting tool. This gate uses a magnet to center itself, with the knurled ring as the only mechanical latching mechanism. [Christian] does a good job of demonstrating the completed carabiner in the clip after the break.

END_OF_DOCUMENT_TOKEN_TO_BE_REPLACED Building an audio player is a fun project. It used to be quite a task to do so, but these days the MP3 decoder chips are full-featured which means that if you know how to talk to other chips with a microcontroller you’ve got all the skills needed to pull off the project. But that must have been too easy for [Ultra-Embedded], he decided just to build an MP3 player out of an FPGA.

It’s not quite as difficult as it first sounds. He didn’t have to figure out how to decode the audio compressions. Instead he rolled the Helix MP3 decoder library into the project. It had already been optimized to run on an ARM processor, and since he’s using a RISC soft processor the translation wasn’t tough at all. He’s using a 24-bit stereo DAC chip to bridge the gap between the audio jack and the FPGA output. Clocking that chip with the FPGA isn’t ideal and causes 44.1 kHz audio to run 3% too slow. He says it’s not noticeable, which we believe. But if you try to play along with a song the pitch shift might end up driving you crazy.

If you’d prefer to just stick to the microcontroller based players this one’s small and inexpensive.

At Hack a Day, we’ve seen dozens of intervalometer builds that open and close a camera shutter remotely. [Luke Skaff] decided to take these builds to the next level by automating a camera’s focus and shutter with a Nintendo DS.

The Open Camera Controller attaches to a camera’s shutter port, but [Luke] stepped things up a little bit by using a USB host controller and implementing the picture transfer protocol. Now, instead of [Luke]’s controller telling his camera when to open and close the shutter, the focus of the camera can be adjusted as well. [Luke]’s build uses an Xilinx CoolRunner-II CPLD and a USB host controller to convert the DS cartridge port to a USB port every DSLR can connect to.

[Luke] still has a mess of wires on his hand, but even we can see the power that inexpensive automation would bring to the world of digital photography.

END_OF_DOCUMENT_TOKEN_TO_BE_REPLACED

Several of us here at Hackaday Brew our own beer. Needless to say, we got a little excited when we saw members of the open source community building a brew tracking system. Brewtarget is an open source tracking system that you could download right now and begin tracking and building your recipes. It looks like there is a fairly active development group working on it and even a feature request form that seems to be filling up. Maybe we overlooked it, but there doesn’t seem to be an existing feature list. We look forward to seeing where this project goes.

Brewtarget implements BeerXML, which means it should also be compatible with Beershmith, a commercial application.

Right after “no editing whatsoever”, the “shaky camera” is the bane of YouTube viewers the world over. [David] came up with a nice solution to the problem of shaky cameras that uses gyroscopes to even out the bumps of making a great movie.

Most cameras attached to moving frames – from the zip-line cameras at NFL games to police helicopters and aerial reconnaissance drones – have some sort of gyroscopic stabilization. Even though gyroscopic stabilization has been around for more than 60 years, the designs haven’t changed that much. [David] dug up a few patents dating from the 50s and set to work replicating the design.

[David] bought a pair of [Glenn Turner]’s fabulously heavy and expensive-looking powered gyroscopes and began bolting them onto a piece of sheet metal. Per the 1950 patent, the gyroscopes were mounted 90 degrees apart and bolted onto the camera.

From the video demo (after the break), there’s a marked difference between filming a stroll though a parking lot with the gyros on and gyros off. While the pair of motor driven gyroscopes look a little ungainly and are a bit too loud for our tastes, the solution is much less expensive than the $1600 professional gyro [David] based his build on.