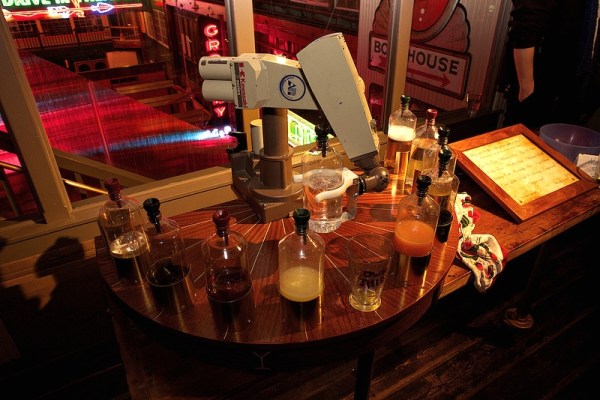 Back in 2002, [Dave] came across a discarded PUMA robotic arm and quickly set his sights on turning it into a bartender to serve drinks at his parties. Unfortunately, the arm was far from operational and being an engineer at his day job meant that working on this project was the last thing he wanted to do when he came home. So, progress trickled along slowly for years. He eventually announced a public deadline to spur him to action, and this years Pi(e) party saw the official debut of  ‘Sir-Mix-a-Bot’ – the robot bartender.

With the exception of having to build a new hand for it, mechanically, the arm was still in good condition when [Dave] found it. The electronics were another story however. Using some off the shelf components and his own know-how, [Dave] had to custom build all the controls. The software was written from scratch as well. (He lucked out and had help from his brother who was taking a Ph.D. program in robotics at the time).

As if the robotics aspect of the project wasn’t enough, [Dave] even created a beautiful custom table that both houses and displays his masterpiece. The quality of craftsmanship on his table alone is worth the time to check this out – there’s a short video after the break.

END_OF_DOCUMENT_TOKEN_TO_BE_REPLACED

Want a soda? Just grab a robot, shove it in a vending machine, and grab yourself one. This video is incredibly French, but it looks like we’ve got a custom-built robot made out of old printers and other miscellaneous motors and gears here. It’s actually pretty impressive when you consider 16 ounce cans weigh a pound.

Okay, we got a lot of emails on our tip line for this one. It’s a group buy for a programmable oscillator over on Tindie. Why is this cool? Well, this chip (an SI570) is used in a lot of software defined radio designs. Also, it’s incredibly hard to come by if you’re not ordering thousands of these at a time. Here’s a datasheet, now show us some builds with this oscillator.

[Huan] has a co-loco’d Raspi and wanted a media server that is available anywhere, on any device. What he came up with is a service that streams chiptune music from your favorite keygens. You can access it with Chrome (no, we’re not linking directly to a Raspberry Pi), and it’s extremely efficient – his RAM usage didn’t increase a bit.

Take it on an airplane. Or mail it.

[Alex]’s hackerspace just had a series of lightning talks, where people with 45-minute long presentations try to condense their talk into 10 minutes. Of course the hackerspace needed some way to keep everything on schedule. A simple countdown timer was too boring, so they went with a fake, Hollywood-style bomb. No, it doesn’t explode, but it still looks really, really fake. That’s a good thing.

[ddrboxman] thought his reprap needed a nice ‘print finished’ notification. After adding a piezo to his electronics board, he whipped up a firmware hack that plays those old Nokia ringtones. The ringtones play over Gcode, so it’s possible to have audible warnings and notifications. Now if it could only play Snake. END_OF_DOCUMENT_TOKEN_TO_BE_REPLACED

On Friday, I announced we would upgrade our commenting system. It was tested over the weekend, and ultimately I have decided to go back to the wordpress system.  Here are the reasons why:

1. Our old comments never got transitioned over.

The intenseDebate system says I can just click a single button and it will import our old posts into the new system.  I did this Friday and the page never moved from 0%. I tried again Saturday night, with the 0% import still there this morning(Monday). Our old posts simply never imported. I don’t know if it was because our database of comments was so large (I doubt it) or what. I went to contact their support, but found them out for the weekend. That’s no big deal, but I wonder if the importer was a manual thing and no one was there to do it? If so, they should probably put a warning on the importer page.

I had many emails and comments saying that the comments were not showing when people were using script blockers, or certain android devices. The intenseDebate website claims that their system will show comments even if someone is using a script blocker. I did not personally test this, and frankly I don’t have to. Even if those people are mistaken or have peculiar setups, I simply can’t ignore complaints that our content isn’t even showing.

3. I couldn’t expand all replies by default, or maybe I’m an idiot.

I didn’t see an option anywhere to display all comment threads expanded by default. Maybe I just overlooked it. Maybe there’s some css trick to it. We HAVE to have our comments expanded. Often there is more useful information in the comments than the article itself. With replies nested you would have to go through and click every single thread just to see if there was anything useful. This is such an obvious feature that I’m convinced I just went stupid for a while and didn’t read the button that enabled it, surely they didn’t omit it.

For these 3 reasons, I removed it.  Just like they said it would, it came out with no issue.

The folks at Flitetest decided to add some extra power to an electric DH.100 Vampire RC plane by adding a butane afterburner. After some testing, and a bit of fire, they were able to make it fly.

Their afterburner uses a small butane canister for fuel. A servo motor actuates the valve on the canister, forcing fuel into a tube. This tube is set up to regulate the flow of butane and ensure it vaporizes before reaching the afterburner.

At the afterburner, a circular piece of tubing with holes is used to dispense fuel, much like a barbecue. This tube is connected to one side of a stun gun’s flyback generator, and the metal surrounding it is connected to the other. The stun gun creates sparks across the gap and ignites the fuel.

With the extra components added, the landing gear was removed to save weight and the plane was given a nice coat of paint. They started it up for a test run, and the plane’s body caught fire. After some rework, they managed to take off, start the afterburner, fly around, and belly land the plane. It achieved some additional thrust, but also sounds and looks awesome.

After the break, check out a video walkthrough and demo. We promise you fire.