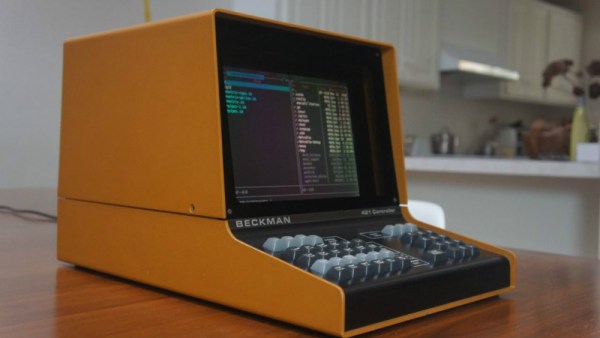 When it was released, the Beckman Model 421 CRT controller represented the latest and greatest in liquid chromatography technology. Its 12 inch screen would allow the operator to view critical information such as flow rate and concentration, and its integrated keyboard simplified system control. It made liquid chromatography faster and easier, allowing lab technicians to focus on analysis rather than the complexities of operating the equipment. 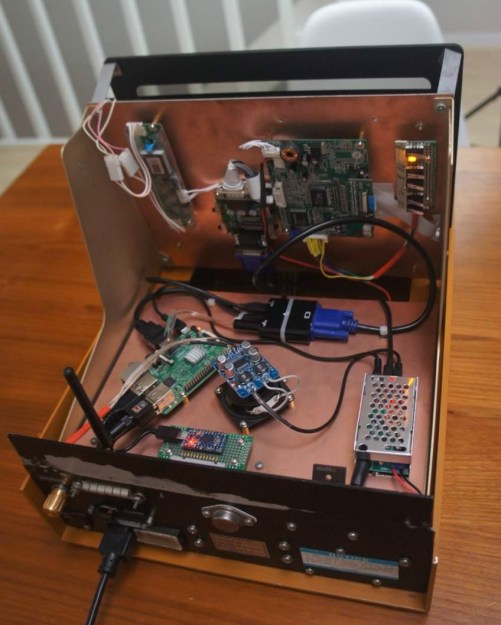 But none of that matters right now. What matters is that [Igor Afanasyev] found one of these gloriously vintage devices at a local swap meet and decided it deserved a second chance at life. With a Raspberry Pi and a surprising amount of support hardware, he was able to turn this roughly 40 year old piece of scientific equipment into a multipurpose device that does everything from classic gaming to multimedia playback. It’s got a few quirks, but overall this is a gadget that any hacker would love to have kicking around their modern-day lab.

[Igor] explains that the Model 412 is essentially just a dumb terminal with no internal logic, so in theory it should have been possible to just hang the thing on a serial port and be done with it. But unfortunately the display drive board was dead, so a full rebuild was in order. This meant that there’s little left of the original device other than the keyboard and the case itself, but since it isn’t exactly a “vintage computer” in the traditional sense, we think the purists will allow it.

For the display, [Igor] used an LCD he salvaged from an old digital picture frame. It was the right size to fit the opening, and thanks to an unpopulated VGA header on the board, wasn’t too difficult to get connected to the Pi with an HDMI adapter. He also added a hardware VGA scanline generator board so that no matter what the Pi shows it will have that classic old-school look; a fantastic detail we don’t usually see on builds like this.

The keyboard on the Model 412 was more of a control panel than a traditional input device, so not only does it have keycaps which say things like “FLOW RATE” and “WRITE TAPE”, but it has a fairly weird layout. After reverse engineering the somewhat unusual key matrix, he spun up a custom firmware for the Arduino Pro Micro using QMK which would let him use the board on the Pi as a standard USB input device. But rather than replace the keys, [Igor] created a little cheat-sheet overlay that he could put over the board to see what keys translate to which letters. It’s awkward for sure, but we really appreciate that he preserved the unique nature and look of the Model 412.

Like the Heathkit H19 that was brought back to life with an internal Raspberry Pi or the DEC VT100 with a BealeBone inside there’s something about the visual aesthetic and no-nonsense approach of these vintage terminals which continue to make them compelling into the 21st century. 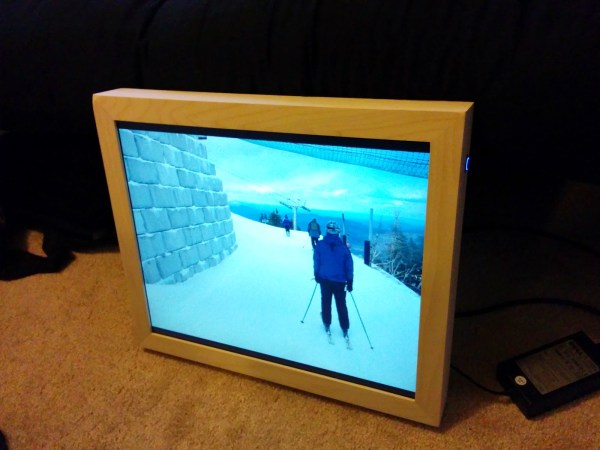 HaD reader [Greg] just finished an LCD picture frame project he’s been working on for a while. This is no ordinary photo display. His brother came up with the idea of having a device to display photos that could be changed remotely. [Greg] gave it some thought and came up with a plan; use a Raspi as the brains, connect to the internet via WiFi and display photos stored in a specific Google Drive folder. Any authorized user can upload photos remotely to the frame so the frame-owner has a constant stream of new photos to view.

Of course, using an off-the-shelf picture frame may have been too easy. Instead [Greg] decided to start with an old computer monitor and wrap it in a wooden frame so it looks good. Mounted to the back of the LCD is a Raspberry Pi with a USB WiFi dongle. The monitor runs at 14 VDC and luckily has an external power supply. Since the Pi runs at 5 V, a buck converter taps into the LCD’s input power and outputs a Pi-happy 5 volts.

This project doesn’t stop with displaying photos! The user can also switch to a weather view. The weather image displayed is generated from weather data pulled from the internet in the exact same manor used by folks who make stand-alone weather displays out of old Kindles. Oh yeah, switching between photos and weather is done by wireless remote! On the frame unit itself there is only one button, but it has 3 functions: A quick press turns the screen off, a short hold syncs with Google Drive and a long hold powers off the RaspPi.

If you’d like to make your own frame, [Greg] has graciously made all his scripts available for download…. not to mention his very detailed build log. 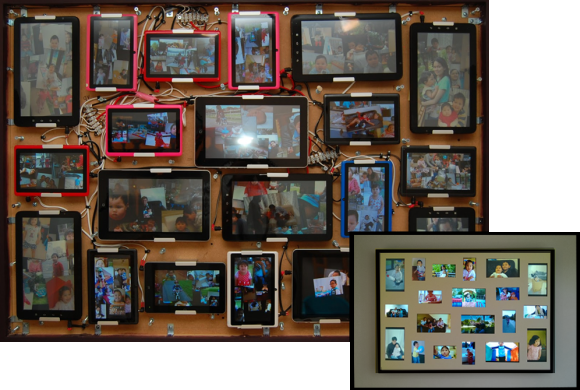 You might not have a small army of unused tablets lying around, but if you did, you should try turning them into what Minn calls a “Giant Interactive Photo Array Display:” A Giant IPAD. Har har.

[Minn’s] first step was to hit eBay, hoping to find a score of low-priced, broken-yet-easily-repairable tablets. The only ones available (and for cheap), however, were resistive touch screens with narrow viewing angles. After waiting patiently for nearly half a year, [Minn] hit the capacitive touch jackpot: snagging a pile of 10″ and 7″ Android tablets. The frame is custom made to provide a solid surface for mounting and enough depth for the tablets to fit correctly. Rather than form his own brackets to hold each device, [Minn] re-purposed some IKEA cupboard handles, screwing them into the MDF backboard and clamping the tablets to them with bolts that press against the case. An adhesive rubber bumper stuck to the top of the bolts prevents any damage.

Providing power to the diverse collection required another custom solution; two 5V 10A supplies and one 9V 16A supply fit into an accompany box safely deliver the needed juice. [Minn] chose an app that will grab photos from cloud storage so he can update the collection without having to dig around inside the frame. See the result in a video below! Want to try this project but only have one tablet to spare? The in-wall tablet mount might help.

END_OF_DOCUMENT_TOKEN_TO_BE_REPLACED

After perusing Amazon one day, [Dave] found a very interesting piece of kit: a small, 1.5″ digital picture frame. They’re not very complex, just an LCD, a few buttons to cycle the picture, and a battery to keep everything portable. He decided the best use of this tech would be a tiny arcade cabinet, featuring screen shots of the best games a darkly neon lit arcade of the late 80s had to offer.

After sourcing a few of these digital picture frames on eBay, [Dave] set to work disassembling the frames and designing a custom enclosure. He wanted a few specific features: controls in the right place, replaceable sides, and the glowing red eyes of a coin acceptor slot. [Dave] whipped a model up in OpenSCAD and sent the parts over to his printer.

The controls for the digital picture frame were connected to a quartet of tact switches on the control panel, and a red LED provides the glow from the coin acceptor. With a USB plug and the frame’s memory loaded up with screen shots, [Dave] has a fabulous desk toy.

All the relevant files are up on Thingiverse if you’d like to build your own. 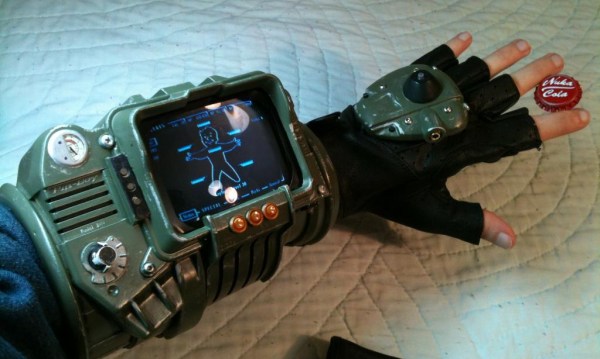 [Zachariah Perry] builds a lot of replica props, and judging from the first few offerings on his blog he’s quite good at it. We enjoyed looking in on the Captain America shield and Zelda treasure chest (complete with music, lights, and floating heart container). But his most recent offering is the wearable and (kind of) working Pipboy 3000 from the Fallout series.

From his description in the video after the break it sounds like the case itself came as a promotional item that was part of a special edition of the game. He’s done a lot to make it functional though. The first thing to notice is the screen. It’s domed like the surface of a CRT, but there’s obviously not enough room for that kind of thing. The dome is made from the lens taken out of a slide viewer. It sits atop the screen of a digital picture frame. [Zachariah] loaded still images from the game into the frame’s memory, routing its buttons to those on the Pipboy. He also added a 12 position rotary switch which toggles between the lights at the bottom of the screen.

A little over a year ago we saw a more or less fully functional Pipboy. But that included so many added parts it was no longer wearable.

END_OF_DOCUMENT_TOKEN_TO_BE_REPLACED Here’s a novel approach to adding a display to your Raspberry Pi. Instead of using a wired display — either via the HDMI (which can feed a DVI port with a simple hardware adapter) or the composite video out — [Chris Bryden] decided to use Bluetooth to provide a wireless display. This really depends on the hardware that you have available. He snapped up a hackable digital picture frame for a song and used the 320×240 display for this project.

You can see the USB nub plugged into the RPi in the image above. It’s a Bluetooth dongle and there’s with a matching one on the digital frame. With the two networked in such a way [Chris] got to work setting up a VNC that would let him pull up the X desktop over the network.

This ends up being one of the best uses we’ve seen for the Bluetooth protocol, and the small screen offers a huge advantage over the use of a simple character display.