[George and Bogdan] wrote in to tell us about a cool Kickstarter they’ve been working on. It’s called the MatchboxARM, and like other tiny-yet-powerful ARM dev boards floating around, this one features a very fast and capable processor and more than enough pins for just about any project. One interesting feature of this board, however, makes it stand out from the pack: it has a USB mass storage-based bootloader, meaning uploading new code is as easy as a drag and drop.

This isn’t the first dev board we’ve seen to sport this feature: the Stellaris Launchpad has had this for a while and even the lowly ATtiny85, in the form of a Digispark has a mass storage-based bootloader. The MatchboxARM, though, brings this together with a very powerful ARM microcontroller with enough I/Os, ADCs, PWM pins, and I2C and SPI ports for the most complicated projects. OSH Park continues to get better and better. We think the recent addition of Project Sharing is a huge feature! Obviously this lets you order up the open source goodness posted by others with a minimum amount of effort. But to us there are a couple of other things that make this valuable.

First off, the ability to browse through the projects can be a huge inspiration for your own work. Secondly, the board files themselves are available for download, and it looks like you can post links to your repository if you so choose when sharing your project. This makes OSH Park something of a Thingiverse for PCBs. Browse through what’s offered then download the files to etch yourself or just to use as reference to see how others do things when laying out the traces. And of course the rock bottom prices offered make this a no-brainer for shared breakout board designs.

The Twitter post calls this the “early stages” of the feature. We can’t wait to see what they come up with as it matures. 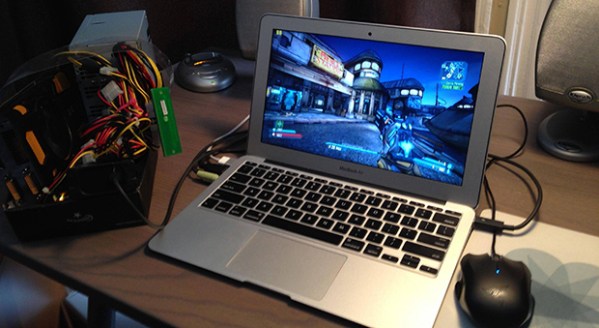 When Intel and Apple released Thunderbolt, hallelujahs from the Apple choir were heard. Since very little in any of Apple’s hardware lineup is upgradeable, an external video card is the best of all possible world. Unfortunately, Intel doesn’t seem to be taking kindly to the idea of external GPUs. That hasn’t stopped a few creative people like [Larry Gadea] from figuring it out on their own. Right now he’s running a GTX 570 through the Thunderbolt port of his MacBook Air, and displaying everything on the internal LCD. A dream come true.

[Larry] is doing this with a few fairly specialized bits of hardware. The first is a Thunderbolt to ExpressCard/34 adapter, after that an ExpressCard to PCI-E adapter. Couple that with a power supply, GPU, and a whole lot of software configuration, and [Larry] had a real Thunderbolt GPU on his hands.

There are, of course, a few downsides to running a GPU through a Thunderbolt port. The current Thunderbolt spec is equivalent to a PCI-E 4X slot, a quarter of what is needed to get all the horsepower out of high-end GPUs. That being said, it is an elegant-yet-kludgy way for better graphics performance on the MBA,

END_OF_DOCUMENT_TOKEN_TO_BE_REPLACED END_OF_DOCUMENT_TOKEN_TO_BE_REPLACED

[John] says, “I noticed an unfortunate lack of many flamethrower guitars on the web so I filled the need. ” That’s just awesome by us.

This series of guitar-mounted flamethrowers started with a small build, able to shoot a six-foot flame for about 40 seconds. Yes, very theatrical, but not something you’d want to change out after every song. From there the builds progressed to systems with more barrels, more fuel tanks, and a huge system that shoots 18-foot long flames colored with standard pyrotechnic supplies.

It should go without saying that this stuff probably isn’t something you should try at home. That being said, you really have to admire the craftsmanship and tenacity to make a guitar mounted flamethrower. Just don’t bring it to an indoor gig.

END_OF_DOCUMENT_TOKEN_TO_BE_REPLACED