Being tired of assembling and disassembling parts/cables every time he went outside to fly his plane, [Elad] figured that he’d be better off building his own ground control station.

The core of the station is based on an old laptop with a broken screen he had laying around and (luckily) an older laptop screen he had found. As the latter only accepted LVDS, an adapter that could generate theses signals from the standard laptop’s VGA output was needed. [Elad] therefore disassembled his laptop and fit all the parts in a Pelican case he bought, as well as a lead-acid battery, a 12V to 19V stepup converter (to power the laptop), temperature/voltage/current sensors with their displays, 40mm fans, an AC/DC converter to charge the battery and finally a pico-UPS to allow uninterrupted use of the station when switching between power sources.

Because [Elad] didn’t have access to any machinery, PVC foam was used to maintain all the parts in place. Autonomy of his station is around 2.5hours on a single 12V 7Ah battery. CAN Bus hacking is all the rage right now. This particular project uses an early development version of an Arduino compatible CAN bus tool to integrate radar detector control into a Mazda dashboard. This image shows the output as the Whistler Pro-3600 radar detector boots up. The self test demonstrates what you would see on the dashboard display if your speed is checked using any of a handful of technologies. But it’s not just the dash display that’s working. The steering wheel controls are also capable of affecting the radar detector so that it can always be hidden from sight.

With auto manufacturers adding more numerous and larger displays to our vehicles it’s refreshing to see someone come up with a hack that makes pushing our own info to those screens possible. The CANBus Triple is an Arduino compatible board which patches into the data bus found in all modern vehicles. To integrate the Whistler for this hack [TheDukeZip] prototyped the interface on a regular Arduino board, then moved it over to the CANBus Triple once he had it working. Check out the video after the break to see the setup in action.

END_OF_DOCUMENT_TOKEN_TO_BE_REPLACED 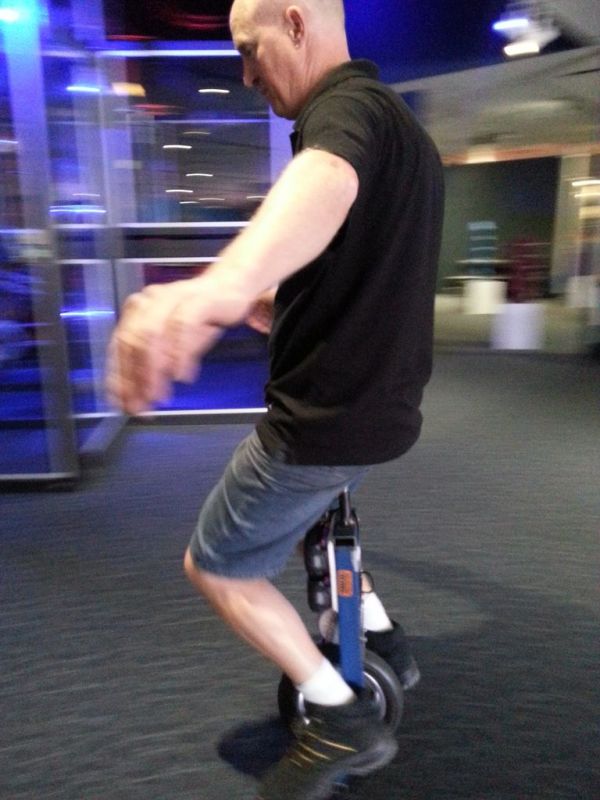 No one has time to hone their balancing skills these days, and if building your own Segway doesn’t generate enough head-turning for you, then the self-balancing unicycle from the guys at [Scitech] should. Their build is chain-driven, using easy-to-find salvaged Razor scooter parts. Throw in a motor controller, 5DOF IMU and some batteries and it’s almost ready to burn up the sidewalks in hipster-tech style.

Some of the previous unicycle builds we’ve seen are a little on the bulky side, but the [Scitech] cycle aims for simplicity with its square tube steel framing and footrests. As always, unicycle builds like these take some effort on behalf of the rider: shifting your weight controls steering and throttle. The [Scitech] gang also discovered that it’s usually best when you don’t accidentally wire the motors up to the controller backwards. We recommend that you find a helmet and watch the video after the break.

Too-cool-for-unicycle hackers can build a dangerously fast e-skateboard instead.

END_OF_DOCUMENT_TOKEN_TO_BE_REPLACED