END_OF_DOCUMENT_TOKEN_TO_BE_REPLACED

We’re introducing a new series on CAN and automotive hacking. First, we’ll introduce CAN and discuss how in-vehicle networks work.

In 1986, Bosch introduced the Controller Area Network protocol. It was designed specifically for in-vehicle networks between automotive controllers. CAN became a popular option for networking controllers in automotive, industrial, and robotics applications. Starting in 2008, all vehicles sold in the US must use CAN.

Modern vehicles are distributed control systems, with controllers designed to handle specific tasks. For example, a door control module would take care of locks and windows. CAN allows these controllers to communicate. It also allows for external systems to perform diagnostic tasks by connecting to the in-vehicle network.

Some examples of CAN communication in a vehicle include:

CAN is usually used with little or no security, except for the obscurity of the communications. We can use CAN to USB interfaces to listen to the traffic, and then decode it. We can also use these tools to send forged messages, or to perform diagnostic actions. Unfortunately, most of the tools for dealing with CAN are proprietary, and very expensive. The diagnostics protocols are standards, but not open ones. They must be purchased from the International Organization for Standardization.

Next time, we’ll get into the structure of CAN frames, and how traffic is encoded on the bus. 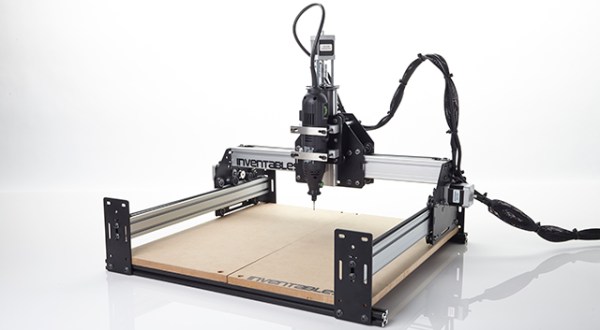 For all the 3D printers that hit the Hackaday tip line, it’s surprising we don’t see more CNC routers. They’re arguably more useful tools, and with the ability to mill wood, plastic, and non-ferrous metals, open up the door to a whole bunch more potential builds. One of the most popular – and certainly one of the least expensive – CNC routers out there, the Shapeoko, just received a huge update that makes this minimal machine even more capable.

The new Shapeoko 2 keeps the same V wheel on an aluminium extrusion design with Makerslide, but fixes a few problems that limited the original Shapeoko. There’s a larger work area on this version, and the Y axes feature dual stepper motors. The biggest feature, we think, is the ability to handle materials larger than the machine itself thanks to its open front and back.

The Shapeoko 2 is available in two versions, a $300 mechanical kit that requires you to go out and get some motors, a power supply, and a grblShield, the full version, for $650, includes everything you’ll need to start routing wood metal and plastic at home.

It’s no secret that we love to see project demos that pander to Hackaday. This often comes in the form of our page loaded on the screen in build photos, or creative use of our skull and wrenches logo. Now’s your chance to pander for a smidge of loot. [Phillip Torrone] offered up 20 of Adafruit’s new 5v Trinket boards as giveaways, and we can’t say no to getting free stuff in the hands of the readers.

So here’s the deal: Use the Hackaday logo on something. This can be just about anything. The images above show three examples made by Hackaday staff. There’s the logo built brick-by-brick on a Minecraft Survival server, a 3D version printed as a badge, and a somewhat squished version inside of a QR code. We will (seemingly arbitrarily) pick twenty winners from all of the submissions, but here’s a few guidelines to help you rise above:

This contest is over, thanks to all who sent in their work! . In order to receive a prize you must include your name, address, and email address (these will only be used by Adafruit to deliver the hardware and notify you when it has shipped). Get your entry in by Friday, November 1st in order to qualify. Obviously Hackaday, SupplyFrame, and Adafruit employees and their families aren’t eligible to win.

END_OF_DOCUMENT_TOKEN_TO_BE_REPLACED The results are rather interesting. The slow attack of the magnetic fields coupled with the synth’s patch results in a surprising variety of sound. The three examples on [Richard’s] blog vary from sounding like a power chord on a guitar to something we’d expect to find in an early horror movie. We would love to see this idea expanded upon. More efficient coils, and more coils in general would add to the effect. The coils on various string groups could also be switched in and out of the system using MIDI control, allowing for even more flexibility. END_OF_DOCUMENT_TOKEN_TO_BE_REPLACED