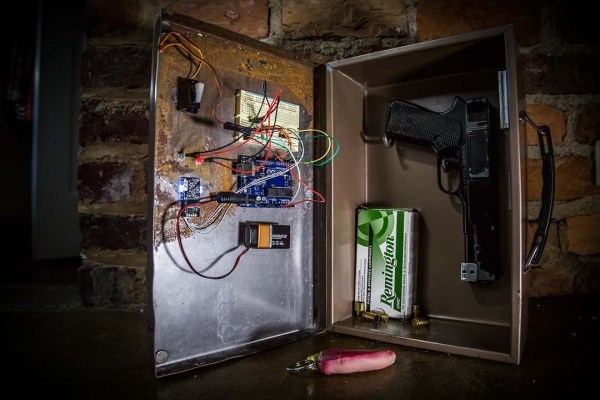 END_OF_DOCUMENT_TOKEN_TO_BE_REPLACED

By far one of the craziest entries for The Hackaday Prize is [Peter McCloud]’s Goliath, an enormous gas-powered quadcopter. It weighs about 240 pounds, is powered by a 30 horsepower v-twin lawnmower engine, is lifted into the air with homemade props milled on a CNC machine. It’s a frightening build even when the engine isn’t turning. When running, it’s an awesome display of power and technology.

Goliath has had a few setbacks of late, snapping two composite props in its first attempt at hovering. This hasn’t deterred [Peter]; he’s picking up the pieces and he’ll have this monstrous quad hovering in a week or two. A good thing, because the judges are paring the quarterfinalists just three weekends from now.

Check out [Peter]’s bio below.

END_OF_DOCUMENT_TOKEN_TO_BE_REPLACED 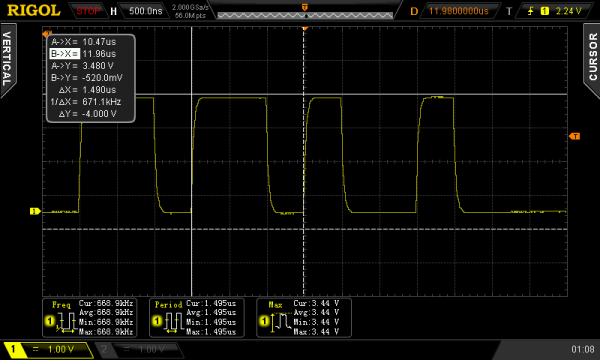 Typically bit-banging an I/O line is the common method of driving the WS2812B (WS2811) RGB LEDs. However, this ties up precious microcontroller cycles while it waits around to flip a bit. A less processor intensive method is to use one of the built-in Serial Peripheral Interface (SPI) modules. This is done using specially crafted data and baud rate settings, that when shifted out over the Serial Data Out (SDO) pin, recreate the needed WS2812B signal timing. Even when running in SPI mode, your hardware TX buffer size will limit how many pixels you can update without CPU intervention.

[Henrik] gets around this limitation by using peripheral DMA (Direct Memory Access) to the SPI module in the Microchip PIC32MX250F128B microcontroller. Once properly configured, the DMA controller will auto increment through the defined section of DMA RAM, sending the pixel data over to the SPI module. Since the DMA controller takes care of the transfer, the micro is free to do other things. This makes all of DMA memory your display buffer. And leaves plenty of precious microcontroller cycles available to calculate what patterns you want the RGB LEDs to display.

Source code is available at the above link for those who would like to peruse, or try it out. This is part of [Henrik’s] Pixel Art Project. Video of DMA based SPI pixels after the break:

END_OF_DOCUMENT_TOKEN_TO_BE_REPLACED

Yesterday the tech world resounded with the astonishing news that Apple can’t run a CMS, rotary encoders were invented just for the Apple Watch, and Intel’s Developer Forum was scheduled well in advance of the Apple media circus. Intel’s smallest computer yet, the Edison, was also announced. Very few people without an Intel employee badge have one of these cool little devices, and lucky for us one of them put up a hands-on review.

With a lot of comments asking what the Edison is good for, [Dimitri] tells us the Edison isn’t meant to be only a dev board. A better comparison would be something like the Raspberry Pi compute module – a small board that product designers can build a device around. This, of course, is not news and should come as a surprise to no one. The 70-pin connector used in the Edison isn’t rated for high-frequency insertions, anyway.

Stock up on level shifters

Compared to even a Raspberry Pi, or even an Arduino Mega, the Arduino breakout board for the Edison is huge. The reason for this is a huge number of level shifters. Where Arduinos can chug right along at 3.3V and 5V, and a Pi uses the somewhat more uncommon (at least for the hobbyist market) 3.3V logic, most of the Edison runs at 1.8V.  All the user-configurable pins on the smaller breakout are 1.8V logic. Someone reading this will fry their Edison, so don’t say we didn’t warn you.

[Dimitri] was keen to get an idea of how powerful the Edison is. There’s a pretty good chip in there – an Atom Z34XX – that’s underclocked at 500MHz. Still, despite this apparent performance limitation, a few benchmarks reveal the Edison can work at up to 615 MIPS. That’s about twice the performance of the Raspberry Pi B+, and real-world tests of doing FFT along with OpenCV tracking makes [Dimitri] happy. Power consumption? At a medium load, the Edison draws about 200 mA. A lot of number crunching and blasting bits out of the radios increases that to a maximum of 500 mA. Not exactly low power, but very good in terms of performance per Watt.

There are two radios on the Edison, one for Bluetooth Low Energy, and another for a/b/g/n WiFi (yes, it supports access mode). The on-chip antenna is acceptable, but for sending signals to the conference room down the hall, you might want to connect an external antenna.

Linux on the Edison isn’t a friendly Debian-derived installation like the Raspberry Pi. Instead, Intel is using Yocto, specifically designed for embedded environments. It’s not quite a distribution but instead a build system. There is no apt-get. Right now, this might be seen as a limitation, but enterprising kernel wizards have ported Debian to the Intel Galileo. Full Linux support is coming, but probably not (officially) from Intel.

Edison launched with an Arduino breakout board, but the Arduino compatibility is literally only a facade. Intel reengineered the Arduino IDE so it writes files instead of toggling pins. This means any programming language that can write a file is able to blink a LED with an Edison. It’s only a matter of preference, but if your idea of embedded development is a single chip and a C compiler, you’re better off using an ATMega and a UART.

This isn’t a Raspi killer, a Beaglebone killer, a TI CC3200 killer, or an ESP8266 killer. It’s an x86 board, with WiFi, Bluetooth and Linux that can toggle a few pins. It’s something different. Different is good. That means there are more choices.

Once upon a time there was a store where you could find the most amazing Hackaday shirts and other swag. If you managed to get one of the rare Jolly Wrencher adorned shirts back then, it’s probably about worn out by now. Prepare to rejoice, Hackaday has a completely new store packed with T-shirts, tools, and stuff to help you fill up those waking hours with hardware hacking goodness.

We’ve had a little fun over the last couple of days with posts that hint (maybe a bit too subtly?) that this was coming. We always try to have a little bit of fun for those of you who are really paying attention. Now we’re wondering who will be the first to implement the one-time pad as a dedicated piece of hardware… project ideas need to come from somewhere, right?

Take a look around the general store and you’ll see this time we have more than just stuff you wear. Hackers need tools and we’ve selected a small but inspiring group of must-have’s. The kits and toys we’ve selected are surely a rabbit hole of personal challenges and evolving hacks for you. And the best part is that these choices are one more way for us to promote the virtue of Open Design (it is the way). The only question now is what other open hardware do you want to see added to those ranks? 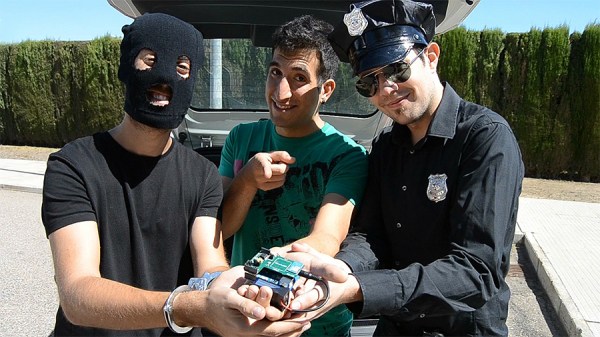 Someone just stole your car. They took it right underneath your nose, and you have no idea where it is. Luckily, you have a GPS tracker installed and can pinpoint the exact location of the vehicle that thief drove away with.

Having a GPS tracker in your vehicle becomes extremely useful when something unexpected happens. Taking the necessary precautions to ensure a secure tracking system can save a lot of time and money if the car suddenly disappears.

Helping to solve the vanishing vehicle problem is the bright, young team at Cooking Hacks who created a step-by-step tutorial showing how to create a homemade GPS tracker. Their design is Arduino based and has a GPS+GPRS shield with an antenna attached to continuously pick up the location of the vehicle. Making a call to the Arduino inside triggers an SMS message to be sent back with the specific GPS data of where the tracker is stationed at. Information is then set to a server and inserted into a database, which can be accessed by opening up a specialized Android app.

We’ve seen similar ideas before, like this GPS tracker for stolen bikes, but this project by Cooking Hacks is unique because of its mobile phone integration with Google Maps. Not to mention, their video for the project is fantastically awesome.

If you have developed a system like this, be sure to let us know in the comments; and don’t forget to check out their video after the break.

END_OF_DOCUMENT_TOKEN_TO_BE_REPLACED 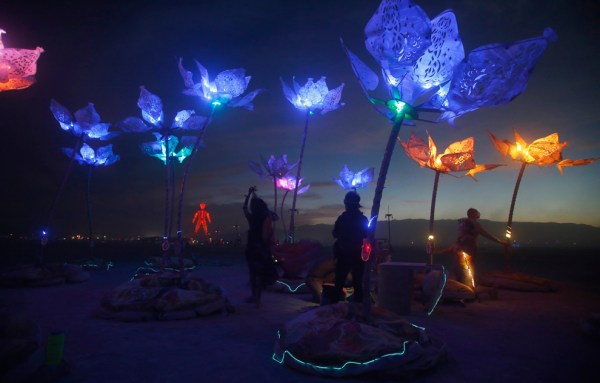 Burning man, the premier desert-based convention, is a vacation for some. [Sam], on the other hand, points out that he is there to get his hands dirty. This year, he (with a team of six) built a set of 20 interactive lotus flowers that light up in sync with a heartbeat.

[Sam]’s biofeedback circuit is able to sense up to two heartbeats per flower. When a person’s heartbeat is detected, a set of high-power LEDs light up from the base of the stem upwards towards the petals for an incredible illuminated display of biofeedback.

The lotus flowers themselves aren’t anything to scoff at, either. They range from 8 to 18 feet high and are made out of steel and rowlux plastic. The circuit boards are all custom-made as well, with every part chosen to be as affordable as possible. The whole installation is powered by a deep-cycle marine battery and a set of 6V batteries, which can run all of the electronics in the flowers for the entire night before needing a recharge.

Burning man is a great example of art meeting technology. For other examples, check out this 2010 pyrotechnic ball, or head there yourself next August! Be sure to check out the videos and the project’s code on the project site as well.