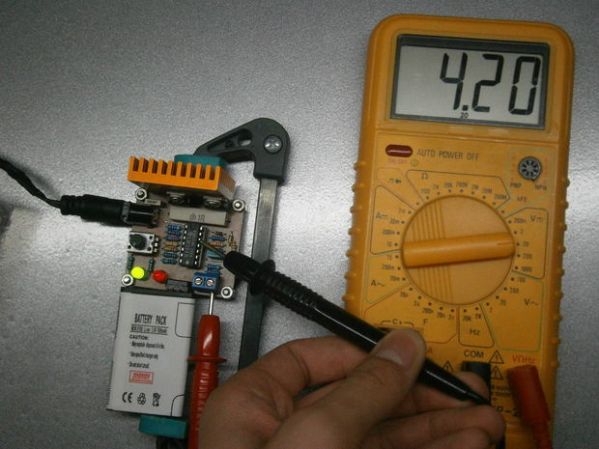 Although [pinomelean’s] Lithium-ion battery guide sounds like the topic is a bit specific, you’ll find a number of rechargeable battery basics discussed at length. Don’t know what a C-rate is? Pfffft. Roll up those sleeves and let’s dive into some theory.

As if you needed a reminder, many lithium battery types are prone to outbursts if mishandled: a proper charging technique is essential. [pinomelean] provides a detailed breakdown of the typical stages involved in a charge cycle and offers some tips on the advantages to lower voltage thresholds before turning his attention to the practical side: designing your own charger circuit from scratch.

The circuit itself is based around a handful of LM324 op-amps, creating a current and voltage-limited power supply. Voltage limits to 4.2V, and current is adjustable: from 160mA to 1600mA. This charger may take a few hours to juice up your batteries, but it does so safely, and [pinomelean’s] step-by-step description of the device helps illustrate exactly how the process works.

Obviously the best way to show you’ve pwned a piece of hardware is to run Doom on it. This time around it’s not just a hardware hack but a security hack. [Michael Jordan] demonstrates a network vulnerability on a Canon printer by making it run Doom. [Thanks to all who sent this tip to us]

Fans of the photo-resist method of PCB etching will appreciate this Bromograph built from an old all-in-one-printer. When gutted, the body of the printer makes a nice enclosure for four UV Lamps. The treated copper clad goes face-down on the scanner glass with the printed transparency between the two. [Michele’s] early testing shows really great results.

[Tom] sent in a link to this video biography of the rLab hackerspace. It shows off the space and its members but also tells the story of a tight-knit community. We enjoyed hearing that almost everything in the space is salvaged and repaired; a great way to acquire equipment on a tight budget while also building the skills of the members.

The bulbs in projectors can be quite expensive to replace. This hack adds an RC filter to the bulb and claims to greatly extend its life. Does this really work and why isn’t it built into the projector?

[Steve Maher] built a GRBL board that is the same form-factor as a DB25 connector housing. It’s basically an Arduino derivative that includes a USB connection, a separate jack for STOP and CYCLE START switches. If you’re not familiar, GRBL is an open source project that lets your drive parallel-port-based hardware with a machine that doesn’t have a parallel port.

Finally, have you heard of the ZofzPCB program before? It’s a way to visualize your gerber files in order to perform a final sanity check before sending your deign off for fabrication. [Thanks Boldport] 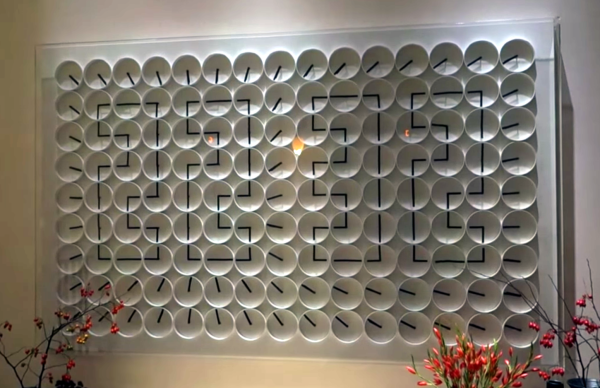 Hotel art often elicits less than a glance from most patrons. But we have to admit if we came across a piece like this we’d be compelled to record a video for later reference. That’s actually where the video came from, this was spotted in a hotel called Ham Yard.

The concept seemed familiar to us and a bit of Google-fu brings up our previous coverage of the concept back in 2010. The display is made up of circular analog clocks and we’d wager this is a version of “a million times” by Human Since 1982, the same artist who brought us the earlier concept.

Since we’re covering this once again we thought it would be fun to ask: how would you go about building your own? There are several challenges that come to mind. First, notice both hands of the analog clocks appear to be exactly the same (there is no short hour hand). Driving the coils of a cheap clock directly (a la Lord Vetinari clock hacking) seems an obvious approach. But look closely and you’ll see the hands sometimes move in opposite directions. There must be a simple way to implement the control, or are we chasing a pipe dream of a low cost version for our workshop clock?

NYC Maker Faire may be a no fly zone this year, but that didn’t dampen the spirits of the Flite Test Crew. We met with Flite Test outside their tent in the R/C and drone area of Maker Faire. [Josh Bixler and Alex Zvada] are two of the hosts of the popular YouTube channel. [Josh] is also well-known for his R/C plane designs, such as the Bloody Wonder and Simple Storch. In addition to hosting, [Alex] is the graphic designer Flite Test. He is also an ace quadcopter pilot, and can be found flying his 250 sized chase quad in many episodes.

Most of Flite Test’s designs utilize Readi-Board, available at Dollar-Tree stores around the USA and Canada. The Flite Test crew is working directly with the manufacturer of this foam to make it, and their designs available all over the world. 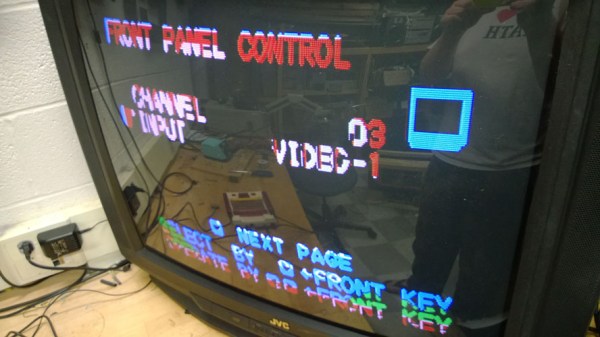 What’s shown on the screen above is about half-way through the process of hacking RGB video into a CRT television that’s not supposed to have it. The lettering is acting a bit like a layer mask, showing bits of the Super Mario Bros. start screen which is being injected from an original Famicom. [Michael J. Moffitt] figured out that he could patch his signals into the multiplexer which is responsible for overlaying the TV’s menu system. Obviously you can’t get your Mario on with this view, but the next step was as simple as finding the blanking pin and tying it 5V. Brilliant.

This particular hack is worthy of recognition. But read through [Michael’s] write up and it’s obvious that he knows the driver circuitry beyond the realm of normal curiosity. If you ever get stuck while trying to do something custom, we’d recommend pinging him with your questions (sorry [Michael] but with great knowledge comes great responsibility). 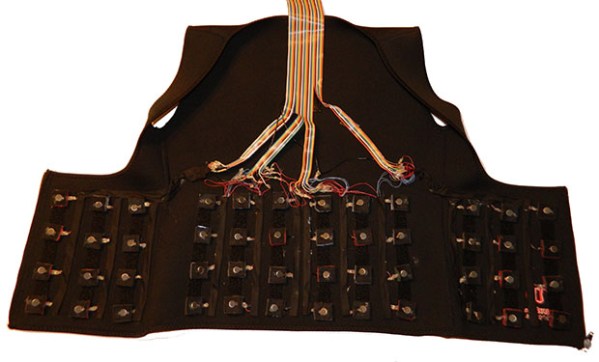 For his entry to The Hackady Prize, [Sean] is building a haptic vest for gamers and the visually impaired. It’s exactly what you think it is: a vest with proximity sensors and motors that wrap around the wearer, providing haptic feedback of nearby obstacles. Actually building a vest with a few dozen motors is a bit of a challenge, and that’s why this project is in the running for The Hackaday Prize.

Each of the 48 motors are individually controllable with PWM. In any other project, this would require a few dozen microcontrollers or one with a whole lot of pins. [Sean], however, is using LED drivers. They do exactly what [Sean] needs them to do – an easy to interface way of a whole bunch of PWM lines – and they do it cheaper than any other solution.

For detecting objects surrounding the vest, [Sean] is using the depth sensor on a 1st gen Microsoft Kinect. In testing, [Sean] blindfolded a volunteer and had a few friends move around with cardboard ‘obstacles.’ The volunteer successfully avoided all the obstacles, as seen in the video below.

END_OF_DOCUMENT_TOKEN_TO_BE_REPLACED 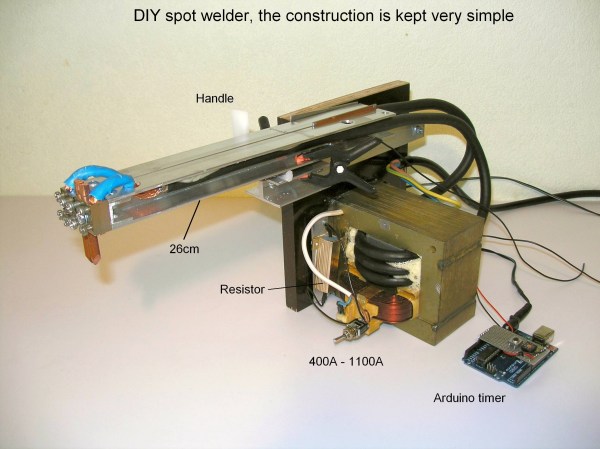 Spot welders are one of the very few pieces of metal working equipment that are actually very much cheaper to build yourself than to buy commercially. In fact, between salvaging a transformer out of an old microwave and buying some of the other components, it’s doable for under $100USD in most cases.

We’ve shared this hack quite a few times before, but [Albert van Dalen] has really taken the cake on creating a very detailed and extensive guide to not only building his, but how to properly use it for various purposes.

[Albert] designed it in a way that allows it to be configured in both opposed and series electrode positions which means besides being able to spot weld sheet metal together, you can also spot weld battery tabs while on cells!